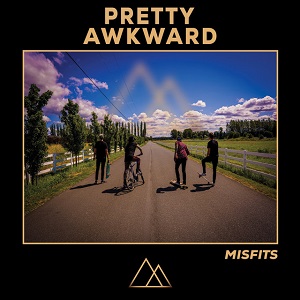 A lot of bands, especially on the American side of the Atlantic, have been more than fine to play out the formulas of their predecessors in 2020, but this isn’t true of the Seattle-based indie rockers Pretty Awkward. In Pretty Awkward’s new single, titled simply “Misfits,” the northwestern pop-rock crew doesn’t try to relive the glory days of Nirvana, but instead try and set up their own established sound through which listeners can pick up on their underlying influences. There’s definitely a lot of vintage rock in this group’s aesthetical make-up, but if you came looking for some retro grooves spliced into jaded, almost synthesized guitar solos in “Misfits,” you’re going to be sorely disappointed to find neither in the song’s three-minute running time.

There’s so much angst to the chorus in “Misfits” that you don’t need to wonder where this group originates from on the map (at least if you know musical geography as well as the average audiophile does), but I’m not going to be the critic to call it post-emo indie rock. The catharsis in the refrain is more than potent enough to balance out the grander scheme of things here, and although I would have liked a little more meat from the guitar parts (especially as we get into the second act of the track), their absence from the fireworks display that inevitably comes seeping through the darkness in this single is excusable in this instance. Pretty Awkward are young and have a lot of ground left to cover, and this is merely a taste of what they can accomplish in the right circumstances.

I really enjoy the moodiness of the piano element in this song, and I actually found it to be quite reminiscent of The Fray when I was first listening to it just recently. There’s a deep, burning desire to be heard in the lyricism here, but through the reverberations of the keys, every one of the words comprising the verses in “Misfits” gets the chance to feel profound and heartfelt. There’s not a doubt in my mind that this track was sourced from the soul and not from a standard, sit-down session in the writer’s room – if the latter were the case, I can’t imagine it feeling nearly as powerful as it does, even upon repeat listens.

So far, 2020 has been a banner year for a lot of new, rising stars in the pop/rock underground, and if you’re paying attention to west coasters like Pretty Awkward, I think you’re going to come to the same conclusion I have – the indie circuit is doing all the heavy lifting for this genre nowadays. While the mainstream is having plenty of struggles maintaining the identity of rock music, bands like this one are having fun simply making the melodies that made us fall in love with this style of play in the first place. It’s a tough odyssey to undertake, but this is one group of musicians I think we can expect to find in the brightest of spotlights before they call it a day together.