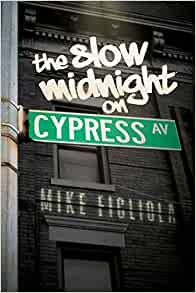 Authentic, realistic and relevant, Mike Figliola’s “The Slow Midnight on Cypress Avenue”, is a riveting and compelling showcase of the characters living in a neighborhood. It could represent any neighborhood however Mike grew up in Ridgewood, Queens near the invisible boarder between Queens and Brooklyn.

There are always shadows but they fall behind us. There are echoes but they fade upon the air. You will sometimes forget….but not always. Mike has not forgotten his Queens community which is evident in his writing. We exchange questions and answers regarding his book which is filled with texture and color and heart.

While gathering inspiration for “The Slow Midnight on Cypress Avenue” what about your childhood in Queens stands out in your mind, and did it add to your inspiration?

What I distinctly remember, is my neighbors. Not like the neighbors you find in these neighborhoods today, but they were a different breed. If there was a blackout, for instance, my parents would set up camp on the stoop alongside everyone else on the block. There was talk and coffee, kids playing in the street, and a true sense of community. I tried to capture this in The Slow Midnight as well, albeit in a darker form I suppose. The streets and structures themselves also stand out, in ways, they were as much alive as a living person next door, or in the apartment adjacent to us. Queens is full of character, and in addition to its residents, the bodegas and school yards and six floor walk ups are as much alive as anything else. I truly tried to capture that in the prose.

What are you hoping that the people who have enjoyed your book will get out of it?

Twofold answer: I wanted to give them an authentic look into a very unheralded, not romanticized, out of the way part of Queens, NY. Much of the time, when books are written about NYC, you hear about Broadway or Wall Street, or they are set within the backdrop of Williamsburg, Brooklyn or even Arthur Avenue in the Bronx. I wanted the reader to wander down Cypress Avenue; a long thoroughfare that straddled the edge of Queens and Brooklyn frequented by butchers and bus drivers and those who live hand to mouth. I wanted those folks to be remembered. They are the lifeblood of this city. Second, I hoped that people may want to knock on their neighbors doors, or even get to know the folks living around them. Granted, some of the characters you come across in The Slow Midnight are of the unsavory variety, I would rather present it as well, aren’t we all? Everyone has their secrets or inner plight – doesn’t mean we should dismiss them.

Were the characters based on people you knew?

Very loosely. They are more of an amalgam of many people I have called acquaintances, friends, and family throughout the years. You can visit some of the places in the book, however, Nunny’s Liquors is such a place!

What motivated you to write the book in the first place?

I wrote a poem with the same title a few years before I actually wrote the novel. I read it at a poetry reading in Brooklyn, and then at a little writers group a few of my writer friends and I had put together. One of the writers at that meeting reacted to the poem by telling me that if I didn’t write a book called “The Slow Midnight on Cypress Avenue” and base it off this poem, he would. I started work on it the next day. Plus, when you write a title like that, there are so many possibilities of where the prose and plot can go.

The book takes place during a single day…why?

I wanted the book to be set on a Sunday, and end on that same Sunday for a multitude of reasons. There are many references to western religion in the book, and I felt what better day than a Sunday to capture the weirdness of church bells of Ridgewood while there are folks pouring out of the bars and back home to sleep a few, and then, in their Sunday best, file into the local church to say they were sorry for the shit they engaged in the night before. Also, some of the characters in the book are deeply religious, conflicted by religion, inspired by religion, and downright hate it. It made sense for all of this to be on a Sunday for that reason.

Why one day, is more because I wanted to give a snap shot, a one off into the look and feel of this neighborhood in Queens. Whether or not every day is the same here on Cypress Avenue, this day was and the characters the reader is introduced to here, absorb it and wait for Monday to come.

Did you personally have a favorite character?

Ben Zogby and Earl the Fisherman were two characters I much enjoyed writing and breathing life into as they were parts of my writing style I had always hoped to present in novel form. They are salty, set in their ways characters who are as recognizable as ash cans are to the inhabitants of Cypress Avenue.

The challenge for me was in writing Dezzy and Father John White. I don’t want to give too much away, but writing from a voice of a young, Puerto Rican girl and a southern minister took work. In the end, I am proud of how they both came out.

Will there be a sequel, a series, a film?

Yes! Sequel is a loose term – more so a second book set in the same literary universe, albeit in a different part of Queens. I have titled it Fine Is Flying Without You and I am hoping for a summer release. As for series, I believe I want to 3 City scape/City life themed books, so with The Slow Midnight, Fine Is Flying Without You, and a thirdinstallment, that would complete my foray into city folk and their neighborhoods. As for film, I know visually the books could make the transition onto the silver screen or even to a streamer, but time will tell.

Look for the follow up to The Slow Midnight on Cypress Avenue, Fine is Flying Without You to be released. I also have a few other irons in the fire, but that’s for another interview.

Get your copy of “The Slow Midnight on Cypress Avenue” by Mike Figliola on Amazon here: