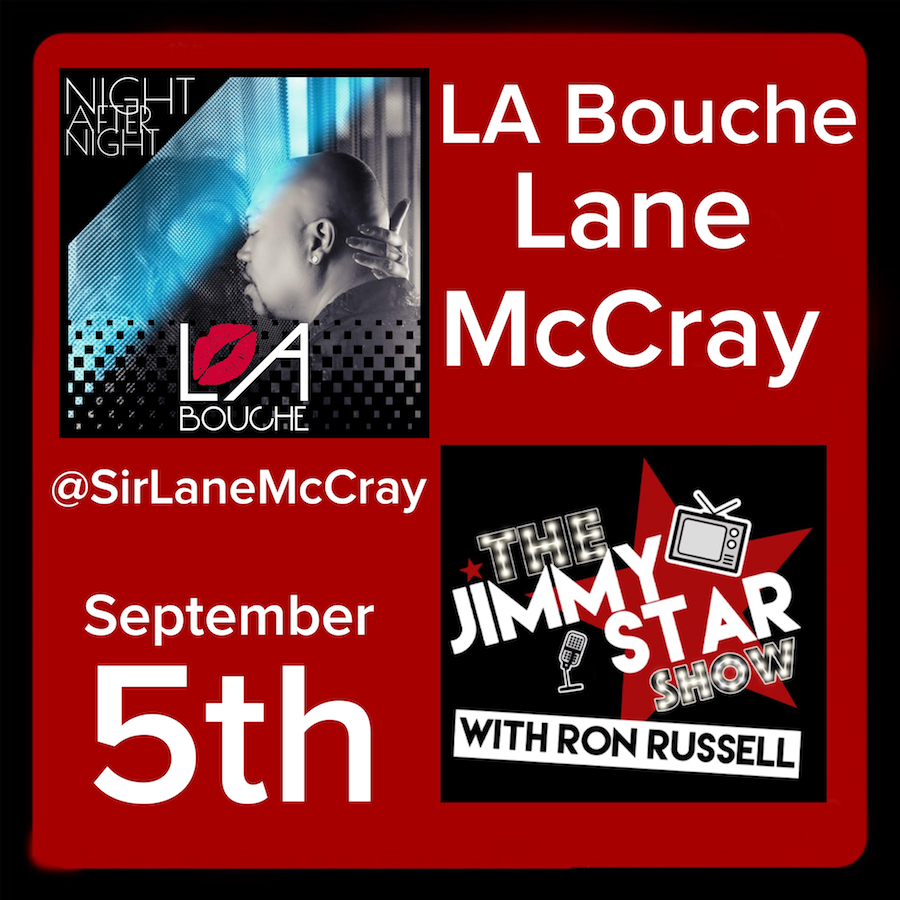 La Bouche (Lane McCray) will be a featured guest on The Jimmy Star Show live radio/tv show hosted by King of Cool Jimmy Star along with Cool Man About Town Ron Russell to discuss their new single “Night After Night” their career and the entertainment industries at large. The Jimmy Star Show is tv/radio’s coolest hit show, featuring the best in music, entertainment, fashion and pop culture, all from a fun industry insider perspective in a completely live, unedited fast-paced two-hour conversational format.

How do you calculate success in the music business? If you have one hit, you are a one-hit wonder.

Two hits, you may be a star. For Lane McCray – The Founder, Singer, Songwriter and Trademark Owner of La Bouche, the business categorizes him as a legend.

With over 12 Million records sold worldwide, La Bouche multi-platinum hits include: Be My Lover, Sweet Dreams, Where Do You Go, Tonight Is The Night, SOS, I Love To Love, Falling In Love, You Won’t Forget Me, In Your Life, Sweet Dreams Remixed 2017.

Lane McCray burst onto the international music scene in the mid and late 1990s with the late Melanie Thornton. They conquered the charts of the 1990s. La Bouche earned numerous awards, including the German Grammy, the Echo (for Dance Song of the Year in 1995), Golden Europa (for Best Duo or Group 1995), nominated for “Best Dance Video” at the second annual MTV-Europe Music Awards, and was nominated for three awards at the MTV VMAs in 1996. After taking Europe by storm, La Bouche took the lead with their undeniably powerful sound in the United States. With their hip and trendy style, La Bouche became a permanent fixture in modern music and entertainment. A household name by the late ’90s, whether driving in your car, watching a movie or television, or attending a major sporting event, if you have been on planet Earth, you have heard La Bouche’s infectious melodies. Their success garnered La Bouche motion picture and soundtrack credits in productions including “Night at the Roxbury”, “Romy & Michele’s High School Reunion”, and MTV’s “Joe’s Apartment”.

This coupling of these two golden voices is magic. The two have been touring the globe performing in over 400 shows since 2016 all the while listening to fans request new music which led to McCray to begin working on new material with Cairo. “It´s amazing how popular 90’s music is today, in fact, it has become a genre unto itself. More and more people kept approaching me asking for new music so I finally decided to open a new chapter for La Bouche and McCray Records” says Lane.

After the release and success of “Sweet Dreams 2017”, On August 14, 2018 – La Bouche is locked and loaded and ready to conquer the world again with their first new original single in sixteen years; “Night After Night”. Produced by Mirko Milan Milosevits & Lane McCray Jr. and written by Sophie Cairo & Lane McCray. Released Worldwide via Nene Musik & in Canada via Rammit Records.

Check out the new music video for “Night After Night” by La Bouche here:

The Jimmy Star Show with Ron Russell is pleased to showcase the expertise and talent of Lane McCray (La BoucheP and all anticipate a fun and informative time talking with him about his career and the entertainment industries at large.

To hear/see Lane McCray (La Bouche) live on the Jimmy Star Show with Ron Russell tune in to W4CY radio on Wednesday September 5th, 2018 from 3-5 pm ET and 12-2 pm PT online at www.w4cy.com from anywhere in the world!