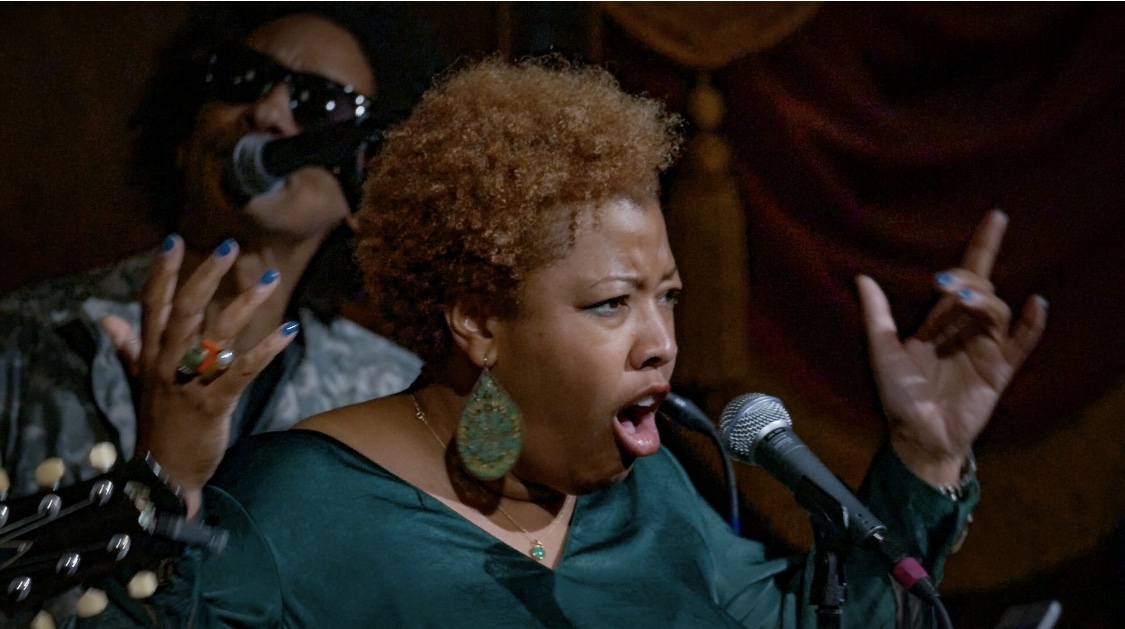 Kismet is True Groove Record label’s newest recording artist. The edgy R&B/Rock/Jazz singer is a force to be reckoned with. She has performed with Macy Gray, Angelique Kidjo, and Marianne Faithful. She has also been a featured lead for five European tours of the Robert Wilson/Dr. Bernice Johnson Reagon production of “The Temptation of St. Antony.”

Kismet Lyles is happy to celebrate her new music and collaboration with Tomás Doncker on the True Groove Record label….

How did you become involved with the fabulous True Groove Records?

I was invited to sing a song at an Aretha Franklin tribute/fundraiser.  Tomás Doncker was holding it down royally on guitar!  When I later asked for recommendations for guitarists to play gigs with me (assuming he was pretty busy), Tomás took the discussion in a different direction.  He happily offered to accompany me on guitar for gigs, but also invited me to join the True Groove roster of artists.  I was not ready at that time, because I thought I needed more info and mutual understanding of the commitment. Tomás was sure about me.  Over the course of 4 months, he told me about True Groove, gave me some of his music, and invited me to see some of TG’s artists perform live (shout-outs to the great performances of Sam Huber, Son of Bazerk, Khalil Kain, Keith Shocklee, and Tomás and the True Groove All-Stars!).  Their musicianship was impeccable and True Groove’s live performance production team was on point.  Tomás also took the time to learn about my musical experience, and we agreed on standards of professionalism, integrity, and musicianship. When Tomás asked me again to join after we finished a great songwriting session, I was confident that True Groove was where I needed to be.  We discussed our vision for my new music/sound and he really seemed to get me as an artist.  It is an honor and sheer pleasure to be a new True Groove artist.

You have performed with many impressive people. Is there a memory that makes you smile the minute you think of it?

There is no one memory that makes me smile.  A rush of memories come to mind so rapidly that I don’t know which one is at the top of my favorites list. How about a top 5 in no particular order?

1. Being a featured performer in Robert Wilson / Dr. Bernice Johnson Reagon production of “The Temptation of St. Anthony” at The Palais Garnier – Opéra national de Paris for several weeks – yes, the “Phantom of the Opera” – Paris Opera House with the opulent chandelier, insane acoustics, and catacombs! In a more historic sense, it was the first African-American opera ever performed at the Paris Opera House.

2. Performing in “The Temptation of St. Anthony” amongst the ruins of the Greek amphitheater in Siracusa, Italy (built in the 5th century BC).  Between the blend of the first-rate vocals and the breathtaking lighting of Robert Wilson — a truly magical experience.

3. Going on my first international tour with my first band, D’Tripp, and performing our original music.

4. Singing in the nationally televised concert for the 30th Anniversary of the Polish Solidarity Movement, along with Angélique Kidjo, Rufus Wainwright, and Macy Gray.

5. Singing at the Newport Folk Festival with Toshi Reagon.

What has been the biggest challenge of your life and how have you overcome it?

I was in a life-changing car accident in 1999.  Fortunately, I was wearing my seatbelt, yet I still endured more than a decade of recovery.  Without the support of my family (which includes my closest friends), I would have suffered longer.  While it takes a village to raise a child, it takes an extensive network of family and medical professionals to heal one adult from serious injuries.  Music has always been the constant in making me feel better, balanced, and happy.  Initially, music brought me back from the “woe is me’s” of recovery, then my voice and my music became healing to others.  Music has afforded me the ability to travel around the world and to achieve one of my ultimate goals of life – to be able to express myself fully.  Once you overcome your challenge, you often have to maintain the win.  Continuing my musical journey is definitely maintaining my win.  Joining True Groove sustains my win.

What is something that overwhelms you musically?

It can be daunting going on stage and not knowing anyone else.  As long as I know one person, I am fine.

Also, I make every effort to avoid the following:  over-singing, a bad sound check and the subsequent delivery of a bad-sounding performance for the audience, and not connecting with people on stage as well as in the audience.

Why and when did you start singing?

I have been singing since I could make sound.  My earliest shout-outs came from parents, and not in a good way.  They would tell me to stop making all that noise!  At Spelman College, my friends would ask me why I was always singing in the shower, the hallways, in my room.  I have felt compelled to sing my whole life.  My family moved from the Bronx to Poughkeepsie when I was in 5th grade.  The beloved Bronx teacher I left had us reading the newspaper and playing the stock market every day.  While keeping up those newspaper habits, I spotted auditions for “Oklahoma” at the local community theater.  My Dad tried to explain to me that it is a show about family, and I would not be getting any lead roles.  I smiled and nodded and said that I didn’t want to be late for the auditions.  Sure enough, my Dad and I were the only people of color in the theater.  That didn’t faze me, because I knew that once they heard me sing and saw me perform, they couldn’t deny me a role.  In the end, they praised my talents and told me that I didn’t really fit the lead roles, but I could be a townsperson.  I am sure they thought that would discourage me from participating.  Nope, here is this 11-year-old African-American girl (dressed to the nines by my Mom, I might add), performing like my life depended on it; without a stage family, unlike the other children with stage families.  They had to rethink their productions after that.  That pretty much sums up most of my theatrical experiences upstate.  It’s nice to see that inclusiveness and groundbreaking casting is now prevalent from the local community theaters to Broadway.

What do you enjoy most about singing live?

The triumvirate:  The connections with musicians on stage, engaging the audience, and the sensation of live instruments resonating throughout my being.

Tell me about your newest single and what inspired it?

Tomás Doncker’s inspiring vocal and musical arrangement of the cover of Yasmin Bey’s (formerly Mos Def) “My Umi Says” track is a great tribute to a timeless song.  Setting the universally-relatable wisdom of your Umi (Mother in Arabic) and Abi (Father in Arabic) to an infectious groove is musical ingenuity at its best. It is the greatest gift to remember and act on the wisdom of our elders. It was such a treat when Tomás asked me to embody the voice of Umi on this cover.

What does the near future hold for Kismet?

The near future will reveal a great new body of music from Kismet Lyles.  It will represent all of the recent interactions I have absorbed and processed.  My goal is to make impactful music.  I hope my music and performances bring waves of emotions to the listeners, to the viewers.  I hope there is pure joy, knowing tears, cathartic breakthroughs, dancing, singing along, and laughter in the right places.  I think part of what I enjoy when performing is when I see that people get it.  I am excited to find out what Tomás Doncker and I will unveil.  Love is always an underlying theme in my lyrics, because who says they need less of it?

Who are your biggest influences?

Definitely performing my music in a series of sold out concerts on Madison Square Garden’s mainstage to adoring fans.  Would love Barclays Center, but I have always set MSG as my hometown bar even as I continue to perform on the world stage.