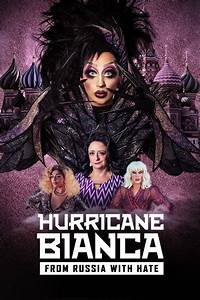 Hurricane Bianca is Back!

Download your soundtrack of the hit film “Hurricane Bianca: From Russia With Hate” on iTunes today:

Bianca Del Rio rose to fame as a contestant on the Emmy Winning television show RuPaul’s Drag Race and is one of the best known DRAG performers in the world.

This latest installment in the Hurricane Bianca franchise is sure to please with cameos from some of the biggest celebrities in Hollywood. Get your copies of the “Hurricane Bianca: From Russia With Hate”  soundtrack and film on digital download platforms worldwide.