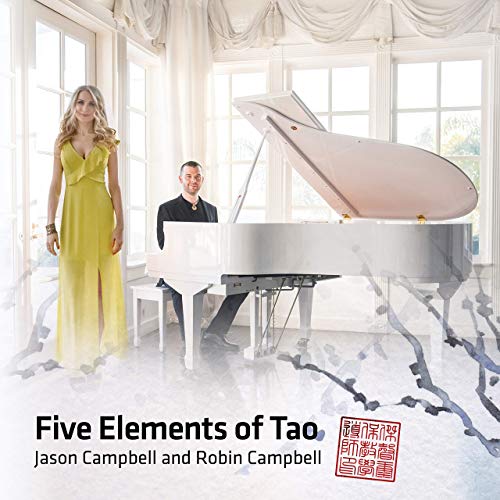 Zen is a word that gets thrown around a lot in our modern culture, but I think it applies perfectly to the sound of the piano in the single from Jason and Robin Campbell, “Reflect – Metal of Tao,” one of the six songs you can find on their 2019 LP Five Elements of Tao. Its keys are at the very foundation of this track’s most profound moments, and though they duel for our affections with a vibrant violin and the ethereal vocal of Ms. Robin Campbell – Jason’s sister, I should add – they tend to come away with the lion’s share of our attention when everything is said and done. “Reflect – Metal of Tao” is a melodic, and quite meditational, composition that was meant for any and all who could use some unwinding this spring, and it lives up to the hype surrounding the collaborative album it was cut from marvelously.

There’s no actual beat nor any percussion in this track, but there’s nevertheless a rhythmic urgency that implants itself in the framework of the song as we get deeper and deeper into the instrumental arrangement stitched together by the Campbells. Scarcely is there a juncture in the composition where we aren’t forced to the edge of our seats awaiting whatever glowing facet of harmonization might come cascading from the heavens next, and though the tension in the song was likely conceived to keep us focused on the vocal interplay more than anything else, it actually makes it easier for us to embrace every dimension of the melody here (which is quite the feat in itself).

This master mix is extremely well-defined, and I think that it’s obvious to anyone – professional critics and casual fans alike – when listening to “Reflect – Metal of Tao” that there was a deeply emotional investment made on the part of Jason and Robin Campbell in the process of breathing life into the music in this single, and really everything we hear in Five Elements of Tao. There’s a kinship with the harmony between Robin and the violin around the three and a half minute mark in the song that you just can’t conjure up on a whim, in or outside of the studio, and from where I sit, a lot of it comes from the natural chemistry that can only exist between two creatives who just so happen to also be brother and sister.

I wasn’t listening to the collective works of Jason or Robin Campbell very closely before getting ahold of my own copy of Five Elements of Tao and “Reflect – Metal of Tao” just recently, but I must say that after getting swept away by what they accomplished in this signature single, I cannot wait to hear more of the music they make both jointly and independently in the near future. There’s no denying the magic they’re making in this track, and if it’s something I can expect to hear more of in upcoming releases, this certainly won’t be the only occasion on which either of their output makes headlines.