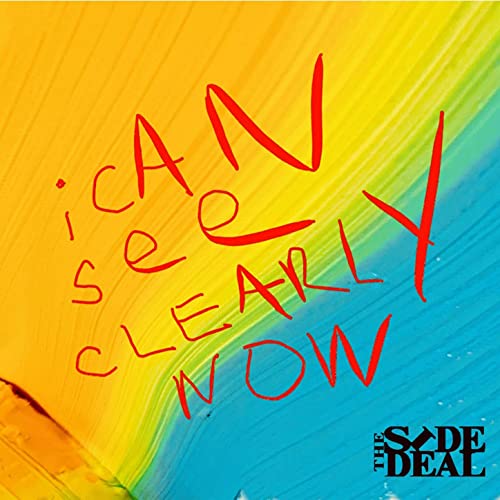 “I Can See Clearly Now” by The Side Deal

On the backswing of a heavily-textured beat, we find the first few strands of a melody ready to pull us into an unescapably alluring web in “I Can See Clearly Now,” the new single and lyric video from indie rockers The Side Deal. It’s obvious from the jump that we’re listening to a cover of the Johnny Nash pop song, but nothing about the music sounds or feels all that much like a standard cover. The lyric video wastes no time in embracing us with as much color as we can handle, and alongside the hearty harmonies that The Side Deal are serving up here, it gets harder and harder to turn away from the screen as the song plays out.

There’s a dreaminess to the visual construct in “I Can See Clearly Now” that I wasn’t expecting to find in this lyric video but was excited by nonetheless. Rather than putting together a pseudo-Sandals commercial inside of a short and sweet document here, The Side Deal create a collage of imagery that leads us from one frame to the next feeling gripped by the content regardless of whether or not we’re well-versed in this song’s swing. We aren’t asked anything in return for a smorgasbord of powerful beats, sensuous melodies and a swaying harmony that could turn around even the hardest of days, and in 2020, I think that makes this particular cover a rare treat to be enjoyed by any and all who can appreciate pop/rock.

If tonality is everything in this genre of music, The Side Deal don’t have any worries ahead of them at the moment. They sound so sharp and unfiltered here, yet there’s never any heavy pop varnish to come between us and the substance of the songcraft. They might not have penned “I Can See Clearly Now,” but they’re performing it with as much passion as if they had; that’s half the battle in making a quality cover song, and for this group, it never sounds particularly difficult or complicated. This is a band that seems to have a better handle on their direction than some of their peers in the American underground do this summer, and that’s going to go a long way towards establishing their brand as one of the best around.

As “I Can See Clearly Now” disappears behind the clouds from which it came shining through just three and a half minutes earlier, denying the fact that The Side Deal have got one of the more approachable sounds in their scene right now feels increasingly futile. They’re cooking with gas in this release and breaking off a feel-good jam in their latest lyric video that couldn’t be reaching the audience at a more pivotal moment, and even though they might not be a household name, they’re certainly rolling like they are here. I’ll have to hear more of their original content to be sure of their long-term credibility, but for the time being, The Side Deal are definitely a band to watch.