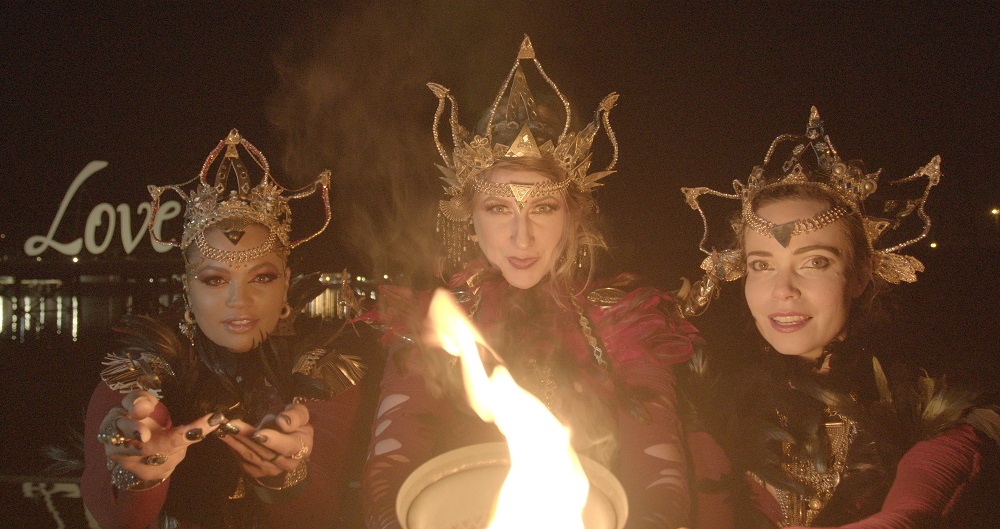 There will likely be a bevy of reactions to Chalice Collective and their new single “Flame of Truth”. The radio edit for the band’s single doesn’t lose any of its ambition or power in this form, but it may be biting off more than it can chew for a significant chunk of their target audience. Many listeners will flock to Sedona Swan Soulfire’s creative vision for the Collection, a vision that includes fire dancers and multimedia parts to name a few, but other listeners may come away from the single wishing that Soulfire and her collaborators would play things a little straighter and narrow their ambitions.

For those, however, energized by the band’s music, they’ll likely be wanting more and fast. There’s a lot going on during this single. Chalice Collective fuels the song musically with a generous shot of synthesizer, keyboard, and a potpourri of pre-programmed percussion. The last sets a definite tone without attempting to pulverize listeners and generates such momentum many listeners will feel like they are carried away by the song’s rush.

Soulfire wavers between traditional singing and spoken word. Her production accentuates each mode of presentation but has the largest effect on the vocals. Her interplay with secondary singers Chakaara Bliss and Ayla Realta provides more than a spark as there are times when it reaches near-explosive levels. The spoken word sections of the lyric are more theatrical than recitative but, nonetheless, it’s a rarity in the pop realm and works exceptionally well.

It’s impossible to argue with the song’s message. Chalice Collective isn’t referring, however, to “subjective” or “objective” truth, but a deeper understanding of the word whose definitions extend much further than the tip of one’s nose. It’s a hard thing to nail down within the confines of a “pop song” but if Chalice doesn’t grab that brass ring, they come closer than you might expect.

They do a masterful job whipping up the song’s atmospherics. It doesn’t sound ham-fisted or overwrought, however, and even has a cinematic tilt. It’s one of those sonic gems that pull listeners into its world and doesn’t release its hold until the song concludes but, even then, its effects continue lingering long after the final note.

It’s easy to imagine the wallop this tune packs in a live setting. Chalice Collective’s presentation of multimedia elements, fire dancers, embodiment artists, drums, and a trio of powerhouse voices promises that Chalice Collective would be the musical equivalent of a spiritual experience. Soulfire, in particular, marries spiritual and academic influences into a memorable overall package that has undeniable power.

We need music like this more than ever before. Everywhere we turn for some sort of inner reinforcement fails us. Politicians lie, celebrities are often made of straw, and other cultural touchstones are invariably hollowed out by their own failings. Chalice Collective’s “Flame of Truth” burns righteously, however, from first note to last and doesn’t pretend to be anything it isn’t. It makes its intentions clear, its altruism shines through, and many will come away from this performance changed, even slightly, by the song’s passion and ideas.