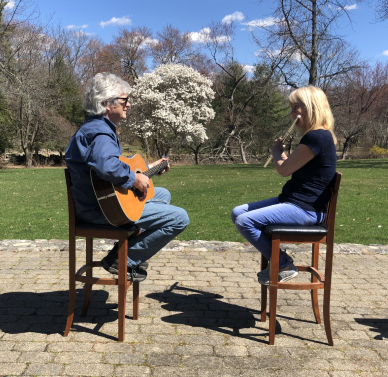 You think you’ve heard it all before. A man/woman duet act, a couple of singer/songwriter or folkie types, and they cop to Fleetwood Mac, The Moody Blues, and even Jethro Tull as influences. Well, one of them plays flute, so there you go. It doesn’t go according to plan – or formula. Blonde & Grey’s debut album Face the Music checks off the aforementioned boxes, yes, but Kathy Olsen and Neil Friend’s collection adds a few new less than obvious boxes.

You hear some slight rock inclinations creeping into the album at various points. The opener and title song “Face the Music” flies out of the starting blocks thanks to propulsive drumming far more at home within the confines of a 4/4 rock cruncher. Folk-rock would be an appropriate label for the pair’s music if labels are necessary, and the songs are convincing in that mold. There’s no sense of Blonde & Grey attempting to fit a square where a circle should go.

The warm and jangling beauty of “Downstream” has a relaxing effect on listeners without ever sounding too precious. It’s impossible to deny the pastoral qualities Neil Friend’s songwriting attempts to invoke in this crystallized gem of a track and he manages to accomplish that without ever slipping into pretentiousness. “Settle With Yourself” stands in stark contrast, in terms of approach. It’s cut from a much more traditional cloth musically and might risk boring listeners a little if not for some clever, if superficial, twists in the arrangement.

The vocals and words are fully realized. The latter may be among the larger underrated strengths of the album. Friend’s songwriting doesn’t broach hitherto unexplored territory, but he does manage to touch on familiar topics and themes with his own language. This isn’t a small thing and is a gift that typically takes years to develop. Blonde & Grey make it sound easy. “A Bird That Whistles (Corrina, Corrina)” allows us to hear an unadorned glimpse of the duo’s shared roots. They revamp the traditional song “Corrina, Corrina” for modern audiences with a more than respectable take on the song.

“Informalities” is cockeyed musical fun with a strong Beatles influence. Its unpredictable trajectory isn’t for everyone; some will even cite it as evidence that the duo could have shaved 3, maybe even 4, songs from the running order and emerge with an even better album. Melancholy fuels “Watch It All Disappear” but listening to the song isn’t a chore. Its patient pacing accentuates that mood, it feels like it’s looking inward from the outset, but it’s an ultimately rewarding and beautiful effort.

The title “Minute by Minute” implies a certain amount of stasis, but the song is anything but static. It’s a breezy romp percussively and both performers sound like they relish closing the album on such a high-spirited musical note. You may not expect much going into this album, but steel yourself for a surprise: it’s really, really good. The musicianship is uniformly strong, and the songwriting never veers in a cookie-cutter direction. Blonde & Grey’s Face the Music merits your time and cash.