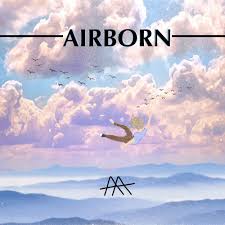 The moment you take control of your own battle is the same time you’ve already won. Maybe one person’s war is waged differently than another, but it’s war, nonetheless. Triumphantly pulling the pieces together and challenging his feelings, musician and producer Alex Alan brings his listener closer into his inner circle in the arresting “Deranged”.

“Deranged” is one of four singles on the EP Airborn. I’m not sure what Alan’s influences are, he doesn’t have much written about him in the way of an official biography, but what I felt listening to “Deranged” is a strong showing of alternative rock, meshed with electronica. Think Radiohead music wise, but with less emotive vocals. Not that Alan’s voice is not emotive, it is, but he doesn’t string the listener along in the same way Thom Yorke does. Alan’s voice is smooth, he enunciates with care. There’s a hint of a crooner coming from the shadows.

One of the most thrilling aspects of “Deranged” is guitar bridge. Featuring the skills of international guitarist Juan Guti, time almost stands still when he plays. His brilliance shines its light. Guti injects a whole other level of flamenco-like tones and his intoxicating guitar playing. The vibe between Guti’s style and the rock, atmosphere-like rhythms creates its own sound, its own percussion. The pockets of the stronger beats collide, giving the song modern, yet rustic spin. The song becomes its own universe, shifting the planets as the listener gravitates towards that guitar. More, I thought, more guitar!

The lyrics lately you’ve been stuck in my head, lately you’ve been stuck in my bed gave me the impression this song is about a lover, but it could also mean Alan is running the same story in his mind and can’t sleep. The anxiety of playing the same words, the same scenarios monopolizing his dreams. The resounding chorus you are something I can’t change, I guess that’s why I feel deranged is gripping. Alan plays with the syllables a bit on “deranged” and at first it’s a little quirky, but it’s almost like he’s releasing a sigh. He’s let out all the air in his tires. The passion is nearly gone, but he just can’t let go. The way he sings is relatable and it’s easy to feel like his words are the same disarray in your own mind.

Additional songs to expect from Airborn are “Fight for Love”, “Everytime” and “You Feel”. Alan self-released and produced the EP. Hungry for new music? Get your mind on Alex Alan and the single “Deranged”. I’m also going to find myself falling down the rabbit hole that is the internet to look up more details on Juan Guti’s discography. Fans looking for an all-out rock experience like My Chemical Romance won’t find it in “Deranged” but they will find a lead singer ready for prime time. Fans of emo rock like Dashboard Confessional and Death Cab For Cutie might be intrigued by the sound. I think they will like it, too.

The music of ALEX ALAN has been heard all over the world in partnership with the radio plugging services offered by Musik and Film Radio Promotions Division.  Learn more https://musikandfilm.com