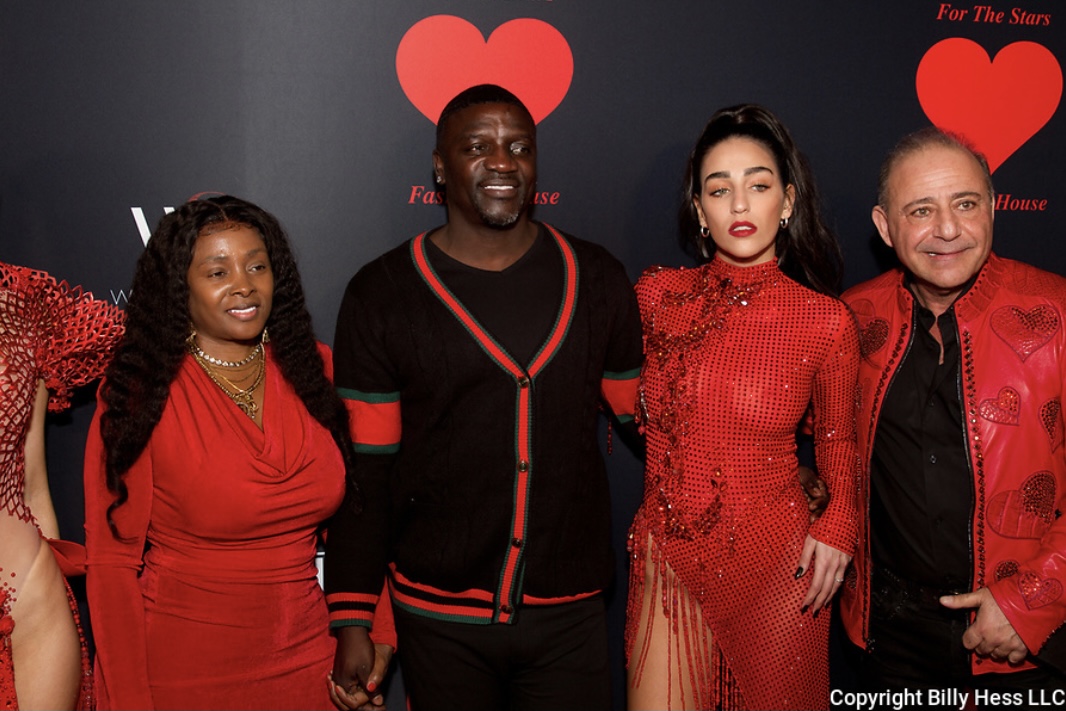 Akon: Lovin’ the Love At “For The Stars Fashion House” Valentines Day Party

Amidst the glamour and dazzle of the 60 foot Crimson Carpet illuminating the heart of Melrose in Los Angeles, and framing the walkway to “For The Stars Fashion House” created by the couturier and creative director Jacob, walked superstar pop, rap, and R&B icon Akon and his lovely wife.

The Senegalese/American Singer, songwriter, entrepreneur, philanthropist, producer originally rose to fame in 2004 following the release of “Locked Up”, the first single from his debut album “Trouble.” Akon is credited for over 300 guest appearances and more than 35 billboard hot 100 songs as well as five Grammy award nominations. He is also the first solo artist to hold both the number one and two spots at the same time on billboard and is listed by Guinness world records as the number one selling artist for master ringtones in the world.

Akon is currently working on his “Akon City” a project that will be built in Senegal and that was inspired by the movie “Black Panther.” “Akon City”  will be designed as a futuristic upscale destination that will be solar powered and environmentally friendly. “Akon City is an extension of the sea into the land with waves diving deep into the roots of each building, making It dance on the music of Akon to celebrate the rise of Akon City reflecting nothing but happiness bringing no less than success.”….Akon

For The Stars Fashion House was created by Jacob. The unique and out-of-the-box creations have been worn by stars including Beyoncé, J Lo, Katy Perry, Shakira, Cher,  Halle Berry, Britney Spears, Nicole Kidman, Nicki Minaj, just to name a few. The creations are theatrical, musical, and never to be seen before or again. While celebrating Valentine’s Day at Jacobs soirée extravaganza I was fortunate enough to meet Akon and he was kind enough to have a conversation…..

Akon, what brings you and your beautiful wife here tonight?

Jacob is like my brother. He is the most amazing guy. I also wanted my wife to meet him as well because Jacob and I have been doing business together a long time. He is probably one of the most talented designers that I personally know.

Does he design your clothes?

He doesn’t make all of my clothes, but some of them. I always come in and step in his closet. For me if I could dress like this every day, I would.

So what projects are you working on currently?

Right now I’m working more on projects that are a little bit out of the entertainment with “Akon City” and bitcoin and crypto coins. But we are looking to drop a new album this year.

Actually, I have. It was to dive into the audience of 100,000 people in Africa, and I was able to accomplish that.

Did you get pictures?

There are pictures everywhere.