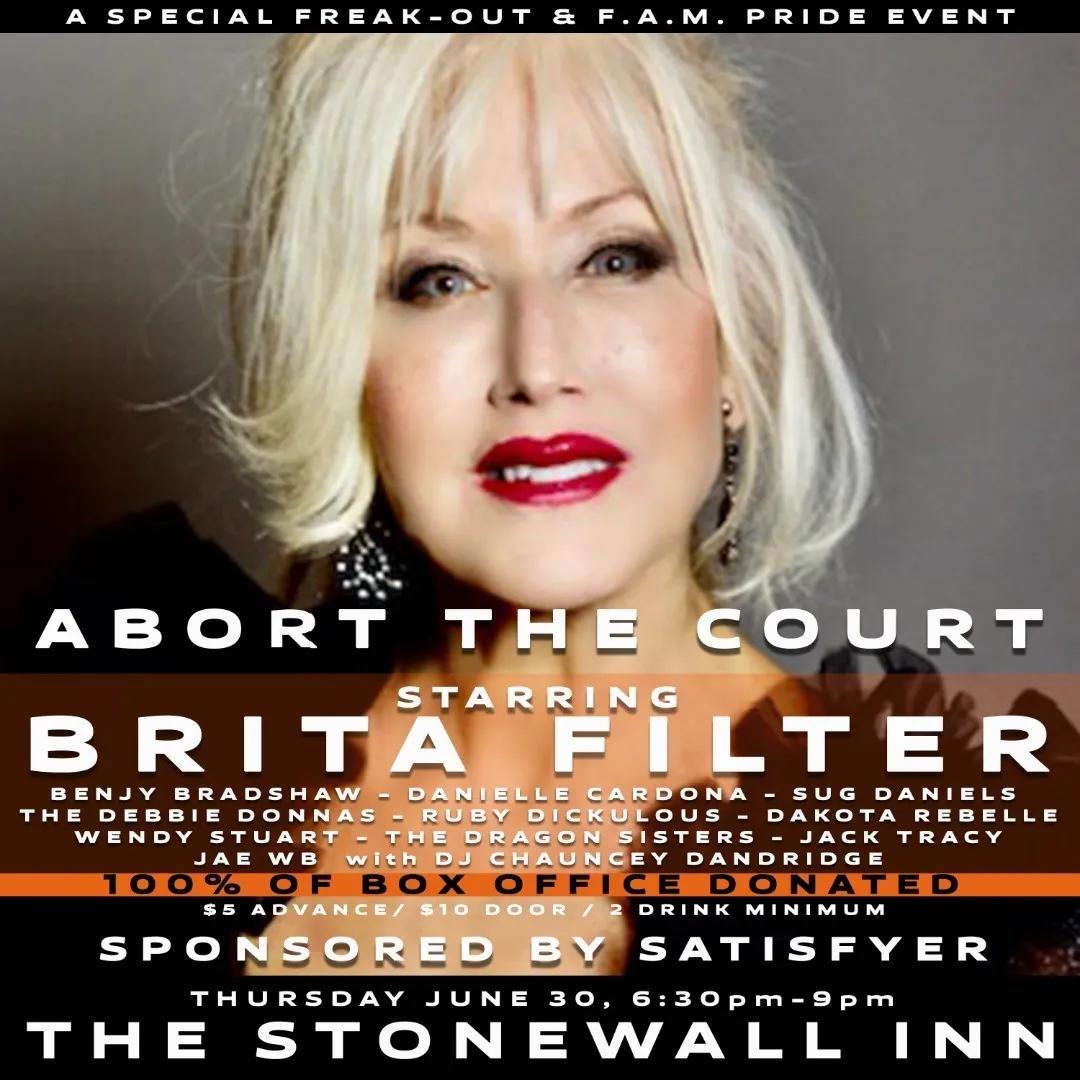 NYC-based drag sensation Brita Filter will headline abortion rights fundraiser Abort The Court at the iconic Stonewall Inn on Thursday June 30, 2022 to close-out a month of LGBTQ+ Pride celebrations with activism.  The event is proudly sponsored by sexual wellness brand Satisfyer, and features a lineup of NYC nightlife luminaries including Wendy Stuart, The Dragon Sisters, Jack Tracy, Jae WB, Ruby Dickulous and more.  Thanks to the generous sponsorship of Satisfyer, 100% of box office proceeds will be donated to the F*CK BANS ACTION PLANthat splits contributions evenly to the Repro Legal Defense Fund, National Network of Abortion funds and Keep Our Clinics. Pre-sale tickets for the event ($5 General Admission, $10 VIP) can be found at abortthecourt.eventbrite.com, which also allows supporters unable to attend the event the ability to donate to the fundraiser.

Brita Filter, NYC drag icon, contestant on Season 12 of RuPaul’s Drag Race and recent recipient of a Wowie Award for “Resistor of the Year (The Right Side of Herstory Award)” was the producers’ first choice for a headliner.  “Brita’s activism is unparalleled, she was my first choice, and we are so happy she has decided to join us,” co-producer Jack Tracy said of Abort the Court’s headliner.  Other NYC independent queer artists performing at the event include The Dragon Sisters, Jack Tracy, Jae WB, Ruby Dickulous, Wendy Stuart, The Debbie Donnas, Danielle Cardona, Dakota Rebelle, Sug Daniels and Benjy Bradshaw.

Jack explained why he wanted to throw a fundraiser for abortion rights as part of gay pride month, saying “first, gay pride is activism–we shouldn’t forget that among our equally important revelry.  Second, the queer community is directly impacted by this impending Supreme Court decision overturning Roe v Wade.  Not only with respect to those of us who may need critical reproductive health care in the future, but also because the Supreme Court’s odious decision that rejects a nearly 50 year old precedent and strips constitutional rights is a rebuke of the right to privacy–an implicit right read into the guarantee of ‘liberty’ that is explicitly stated in the due process clause.  And do you know what else is rooted in that right?  Same-sex marriage.  Interratial marriage.  Hell, even prohibitions against anti-sodomy laws.  This is just the first hit, our fight must start today.”

“After researching many abortion rights organizations,” co-producer DJ Chauncey Dandridge explained, “we chose a fund that devotes resources to three of the many important issues around abortion rights–direct support for people now criminalized for self-managed abortions, support for individuals seeking abortion access and assistance to beleagured abortion clinics.”

Pre-sale for Abort the Court is now live at abortthecourt.eventbrite.com, with $5 general admission, limited $10 VIP and the ability for those unable to attend to donate.