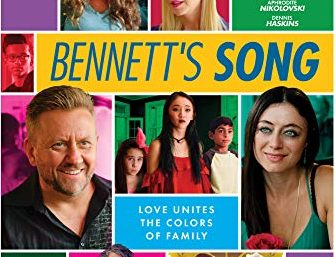 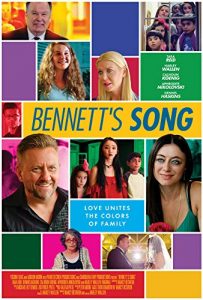 Vision Films, Auburn Moon Productions and Painted Creek Productions are proud to present the heart-warming new film about love, acceptance and inclusion, Bennett’s Song. Directed by Harley Wallen and written by Nancy Oeswein, this sweet and sentimental film follows two very modern families and a young girl with big music dreams. It is a very timely celebration of diversity, love and acceptance that has been likened to Modern Family meets High Fidelity.

When two very unique and diverse families with seven kids each collide, they find laughs, music, love, and a few answers about what it means to be a not-so-normal American family in the 21st century.

“What really attracted me to making the film was how warm, cute and beautiful the story and characters were written”, says director, producer and star of the film, Harley Wallen. “I wanted to do it justice and tell the story with the same care and love for the characters as it was written. It was such an amazing journey and we all sure felt like family when it was all over. Bennett’s Song feels like a classic the first time you see it and I truly hope the audience will enjoy the ride as much as we did making it.”

“Bennett’s Song was inspired by the thousands of families that look like mine and a lifetime in the music business,” says screenwriter, Nancy Oeswein. “Adopting my children from different parts of the world is the best thing I’ve ever done. Second to that is my career representing emerging music artists and seeing the importance of art in our lives. This story combines my two great passions.”

“We are so pleased to be bringing Bennett’s Song to the world and it couldn’t be better timing”, says Vision Films Managing Director/ CEO, Lise Romanoff. “This charming film is a loving reminder that every family is special and should not be taken for granted”.

ABOUT VISION FILMS:
Vision Films is an Independent Worldwide Distributor and VOD Aggregator of over 800 Feature Films, Documentaries and Music Programs from some of the most prolific independent film producers in the world. Led by Lise Romanoff, Managing Director/CEO Worldwide Distribution, Vision Films releases 2-4 films a month, across Theatrical, VOD, DVD, and television. www.visionfilms.net

ABOUT AUBURN MOON PRODUCTIONS:
Auburn Moon Productions is the film producing arm of the award winning music/comedy Auburn Moon Agency. Auburn Moon has produced or co-produced 8 independent films in the last 3 years, most of which have won numerous film festival awards.