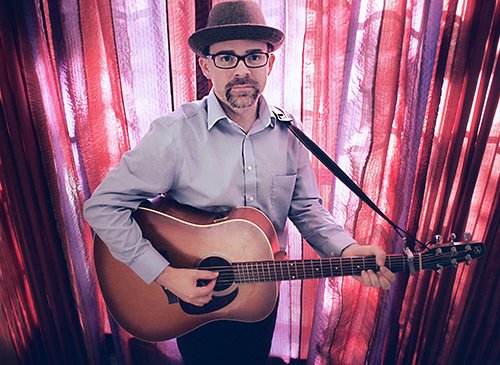 Trey Hunter’s English Poets is more than just one thing. The twelve song collection is a satisfying musical experience certain to entertain and move many. It is, an imaginative exercise born from a need to express one’s self. It is a knowing nod towards Hunter’s avowed musical influences such as Randy Newman, Bob Dylan, and Daniel Johnson, among others. It is, likewise, art as catharsis. A wide gamut of human emotions and difficult stretches of Hunter’s personal journey spawns these compositions and assessing the immeasurable therapeutic value writing this album has for Hunter shapes each of its dozen songs. Despite its personal nature, however, Hunter dodges any danger of obscurity or self-indulgent autobiography. English Poets resonates with listeners thanks to its intensely human qualities and such strengths supersede the aforementioned elements defining the album.

“Death of Eileen”, despite its minimalist aesthetic, echoes The Beatles, another of Hunter’s key influences. The Fab Four’s figurative fingerprints leave their mark on the vocal, in particular, thanks to how their cloying melodic strengths undercuts the song’s serious subject matter and how Hunter weaves the track’s smattering of backing vocals with the lead vocal. The cut segues from sparse keyboard accompaniment in the first half into singing and acoustic guitar anchoring the song’s second half. It’s an evocative opening to the album.

The Austin, Texas resident maintains a consistent arrangement for the title song. Woodwind-like flourishes punctuate the otherwise acoustic tilt of the track and Hunter’s unconventional voice delivers another delicate yet melodic vocal. Hunter’s penchant for memorable vocal melodies stands out throughout English Poets. He scatters bursts of keyboards over the course of “Twenty Odd Years” but is much more of a traditional acoustic song in a singer/songwriter mold. The personal veneer coloring each of the songs on the album never overwhelms its inherent musical value. It is one of the sturdiest performances on English Poets.

Reminiscent of Robyn Hitchcock’s songwriting, bright hues of acoustic guitar playing and passionate singing distinguish “How I Feel”. The low key sonic architecture characterizing English Poets as a whole provides a perfect forum for Hunter’s emotive singing and sharp writing skills. The amiable shuffling driving “Got a Girlfriend Now” towards its inevitable conclusion shapes one of the album’s lighter moments and  Hunter transmutes light country music echoes through his idiosyncratic sensibilities. Its brief length, like other tracks on the release, never leaves listeners feeling as if Hunter’s approach cheats them of an entertaining musical ride.

Raw intimacy deepens the impact of the album’s ninth song “Tame My Ego”. Hearing the short squeak of Hunter’s fingers changing guitar chords brings us inches away from the performance and even light post-production effects never dampen our interest in the song. It boasts a fearless lyric confronting the self without blinking or flinching. Hunter concludes the release with “The Weeping Man” and it is a fitting and emphatic closer for this collection. For a final time he demonstrates his artistic debuts while still staking out signature territory none of his peers or contemporaries occupy. The refrain is effective and contrasting the song’s poetic qualities with its curt yet stylish acoustic guitar work is a potent mix. Trey Hunter’s English Poets tests the boundaries of folk music while remaining within the genre’s wheelhouse and conveys a depth of feeling other 2020 releases of the same ilk will strain to match.