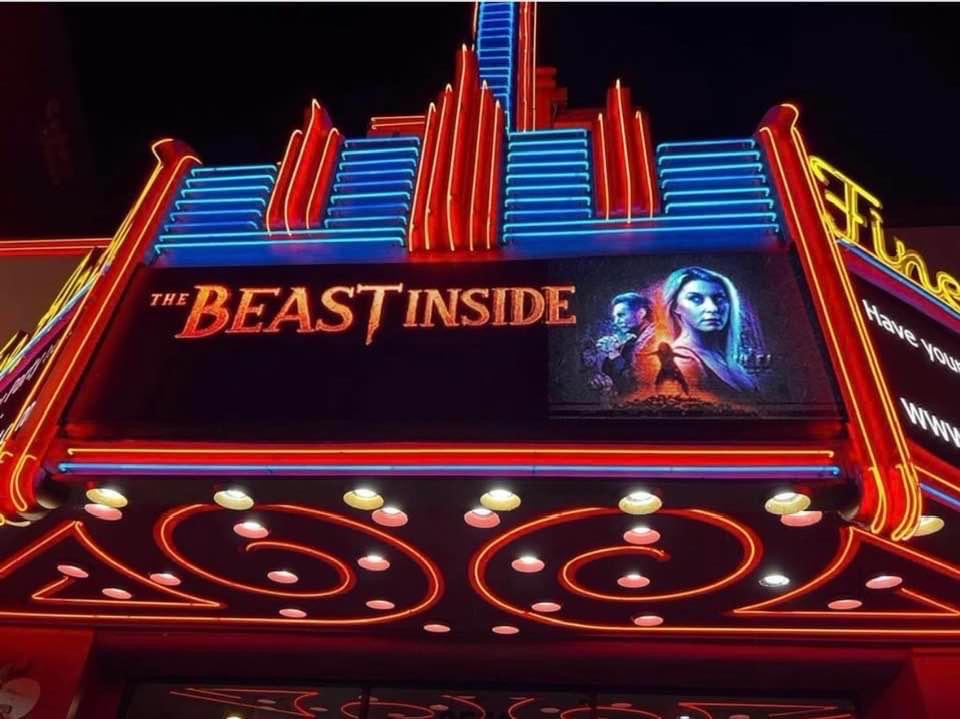 “If you’ve got faith and you believe in what you are living for, you can stand your ground when the Devil’s at your door”….John Michael Montgomery

“When you’re in hell, only a devil can point the way out.”…Joe Abercrombie

The Fine Arts Theater in Beverly Hills California was the vibrant scene brimming with a who’s who from the horror, film, and rock world and the only place to be last Friday December 2, 2022, for the industry screening of the new thriller The Beast Inside. The psychological horror sensation produced by See You Next Tuesday Films, co-written by Sadie Katz and Director Jim Towns starred Australian actor Vernon Wells (Commandos, Mad Max 2, Weird Science) who flew in from Japan to attend, Laurene Landon (Airplane ll, Maniac Cop) and Sadie Katz (Wrong Turn 6, The Bill Murray Experience), who portrayed Anne in the leading role. Anointed film composer Randy Edelman (Last of the Mohicans, My Cousin Vinny, The Mummy 3, Dragonheart), walked upon hallowed ground after delivering a charismatically touching yet dark, and turbulent musical vision arousing emotions that lead to deep reflections and consequences.

The Beast Inside in this unique psychological horror thriller follows Anne’s devastating plight to rid herself of the demon that’s possesses her and threatens to kill her after killing her mother (Laurene Landon). The family inherited Beast then plans to move on to her young son and kill him as well. The excommunicated priest played by Vernon Wells attemps to help her, but all seems hopeless……

The Red Carpet was an organized mad house in the best possible way. With nearly 400 people in the lobby at any given moment it was still easy to pick out the superstars that attended aside from the cast and crew. Kim Richards (accredited Grammy winning music producer) and rocker Rocky Kramer from Allied Artists Music Group graced the crimson carpet with new rapper Apex Tay. Rocky is set to Star in his own film next year “Rockin’ in Time”. Deep Roy from Charlie’s Chocolate Factory, Star Trek, How the Grinch Stole Christmas, Return of the Jedi, and many more appeared, along with Marta Kristen (Lost in Space), Mike Ferguson (Animal Kingdom), Edge of Paradise, the new super-group, and all the well-known horror characters on the planet.

With solid performances by the entire cast, (no exception), focused directing by Director Jim Towns and an overwhelming kick ass score by composer Randy Edelman the drama and the self-exorcism theme seemed genuine and believable. The dark visual style and the build-up of the music’s emotional dynamics kept the tension fresh throughout the film. While the score was screaming the sound of fear and anticipation it also conveyed a dark romantic and beautiful contrast of vulnerability and innocence. This music remains with you even after the lights come up.

The evening was a sublime success for the movie and the cast and crew. The silver screen cast a platinum and diamond shadow upon The Beast Inside. The movie will be released next year, and the soundtrack ahead of it. However, the Christmas background themed movie was a great prelude to the upcoming holidays ….