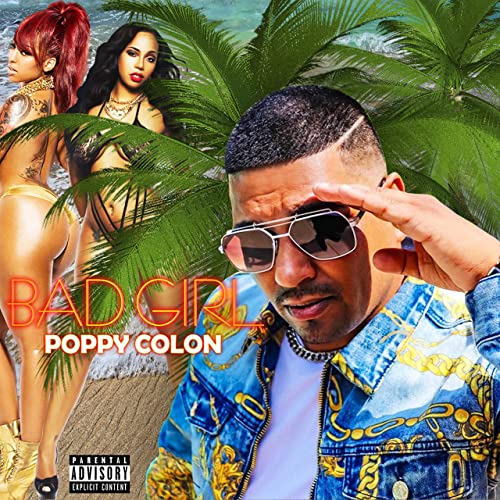 Exotic and stylishly arranged as to move our focus progressively towards the vocal’s relationship with the percussion, Poppy Colon’s “Bad Girls” doesn’t have a dull moment in the entirety of its four minute running time. Instead of relying on a sample, Poppy Colon conjures up a gorgeous guitar melody to use as his main backdrop here, tempting us with a textural element in the mix as frequently as he does his command of the lyrics. “Bad Girls” might have plenty of counterparts on the radio at the moment, but if you’re looking for something consistently enthralling on an instrumental and vocal level, it stands alone. I was impressed in my initial sit-down with the song, but in the time that’s passed I’ve only grown more intrigued by this material’s vibrant sway.

Though the groove feels like the most important part here other than the strut of the vocal, I wouldn’t put all of the credit on the percussive arrangement alone. There’s just as much action coming off of the bassline and even the construction of the mix itself, which alludes to some dancehall and Latin pop influences I want him to emphasize all the more in his music. Poppy Colon has never been shy about putting himself out there in a performance, and while the lyrics in this song are less than vulnerable, everything from the surface stuff to the depth of the tonality the instrumentation presents feels really exposed and unhidden by the synthetic nonsense his peers tend to hide behind when making experimental music.

“Bad Girls” has as simple a pop hook as you can work into a harder rap track, and yet my man never sounds like he’s relenting against the pressure of the implied harmony. The attack he’s utilizing is straight up retro DMX, but it’s not nearly as aggressive as one would need it to be in order to brand the track an homage. There’s nothing recycled about the way the melody winds up married to the pulsating kick of the drum, but instead a feeling of insularity that becomes increasingly difficult to escape as we get closer to the finish line. Poppy Colon has toyed with some ambitious work in the studio before, but this is an affirmation of his alternative interests more than it is anything else.

An amazing song at blistering or moderate volumes just the same, Poppy Colon’s “Bad Girls” feels like the right addition to make to this artist’s growing body of work at the moment. Critically speaking, there’s not enough here for me to say that he’s outwardly inviting influences from reggae, rock and even old guard gangster music, but I think you’d have to be crazy to ignore the way his approach is starting to diversify. Hybrids are literally everywhere in pop at the moment, but this doesn’t sound deliberately geared towards a pseudo hipster audience (as much of the other crossover content has). Poppy Colon is the real article, and his passion inside of “Bad Girls” definitely solidifies his rep in this industry even more than it already was.