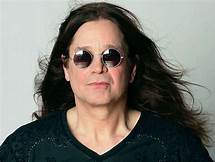 Ozzy Osbourne recently had a truck full of ice dumped into his swimming pool in a desperate bid to keep cool in the Los Angeles heatwave.

Locals have been battling the scorching sun in recent weeks, with temperatures soaring to record heights, and the former Black Sabbath frontman decided he would order blocks of ice to throw in the family’s backyard pool so he could enjoy a refreshing dip.

However, his wife Sharon reveals the plan backfired.

“Ozzy’s brilliant idea to cool the pool during last week’s heatwave,” she captioned an Instagram photo of the ice melting in the pool on Tuesday (18Jul18). “3000 lbs (pounds) of ice = 3 degrees cooler”.

Sharon Osbourne opened up further about the rocker’s failed efforts during Wednesday’s episode of her daytime show The Talk.

“When Ozzy went into the pool, there was no heater on, (but) it was boiling hot, and it was boiling hot outside,” she recalled. “He goes, ‘I can’t take this, I need it to be cold.’ So he came up with this idea of putting the ice in…”

“It did nothing…!” she exclaimed. “Three degrees lower and Ozzy goes, ‘Alright, we just gotta get more,’ and I’m like, ‘No, it doesn’t work!'”

Sharon ended up having to ban her husband from trying to have more ice delivered to their estate: “I wouldn’t let him! These poor guys bringing this ice!” she laughed.

The couple has since found a more technical solution to its hot pool problem, which Sharon hopes will satisfy Ozzy’s desire to “work out then jump into a cold pool”.

“Now, we’re having a cool thing put on the pool to make the water icy cold,” she shared.