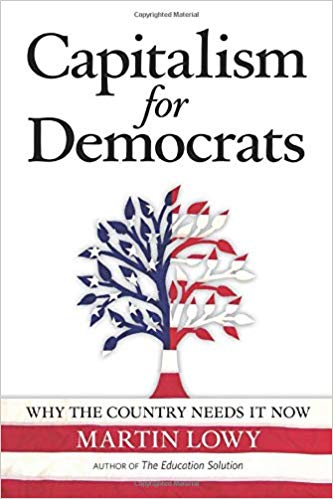 Despite the political specificity of the book’s title, Martin Lowy’s Capitalism for Democrats: Why the Country Needs It Now never cops some high-handed attitude with the reader. Lowy identifies as a centrist Democrat early in the book’s text and it will test you to find any instances of Lowy campaigning for a particular side. There are some implications about his point of view scattered throughout the book, but he delivers them in an understated rather than strident fashion. Lowy has authored a number of books before this one and his sure-footed skill as a writer shows throughout Capitalism for Democrats/

Lowy sees the questions surrounding capitalism in modern society is one of the most important issues facing democratic cultures. He poses the stakes in global and economic terms; it ultimately boils down to the struggle between liberal and illiberal hierarchies of power like the modern hostility between the United States and Vladimir Putin’s Russia. Some will fall in line with his thesis about capitalism’s place in that struggle but you do not need to agree with him to see how well Lowy navigates his argument.

Despite the book’s short length, it has remarkable depth. A major reason for this is Lowy’s ability to hone in on subjects with near withering clarity – there is no wasted motion in this book. It drives straight to the point of whatever it discusses. Lowy likewise limits the book’s language in a helpful way – any competent reader will get something out of this book thanks to its accessibility. With a looming Presidential election, the book is more relevant than ever, but anyone living in a capitalist system will benefit from reading Lowy’s work.

It takes him fourteen chapters to provide his take on the attacks on capitalism in recent history and his responses to each. He examines socialism and capitalism alike and covers hot button issues like economic justice as well. Lowy leaves no stone unturned defending capitalism’s potential and re-envisioning how it can work for the better of society again and the research driving those efforts is apparent throughout the book.

He includes a thought experiment in the book as well that comes at a pivotal time in the text. Lowy structures Capitalism for Democrats in such a way that the book unfolds at a good pace for readers alternating well between idea-oriented chapters like his writing about socialism and later issue-focused chapters like the one on antitrust laws. It bears noting that Lowy has such a likable manner as writers that even potentially dry chapters like the aforementioned look at antitrust legislation are an interesting reading experience.

It is interesting how much of his personality Lowy brings to bear throughout the course of this book.  He engages readers’ with the issue at hand with an off-hand conversational style that is nonetheless learned and has ample evidence supporting its claims. Martin Lowy’s Capitalism for Democrats: Why the Country Needs It Now is a book I expect will hold increasing relevance in the years to come.