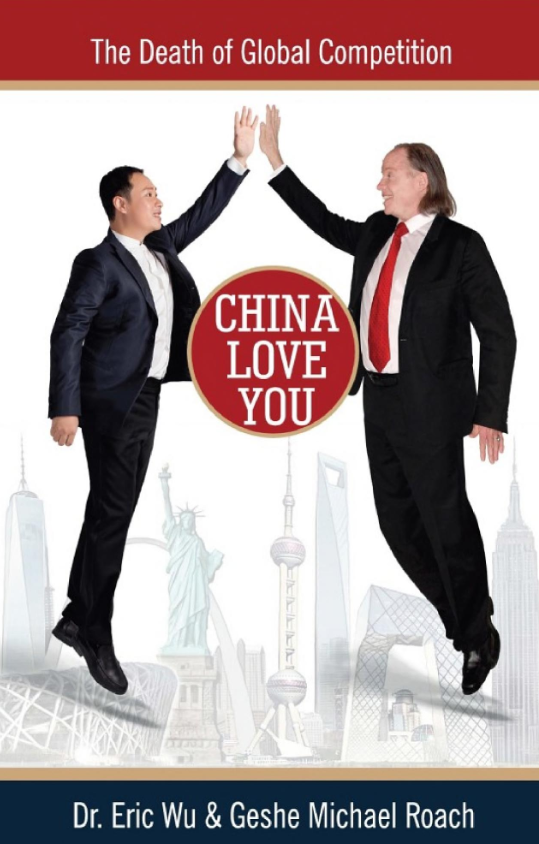 Geshe Michael Roach and Dr. Eric Wu paint what could be an intellectually dense, somewhat communicatively transient set of concepts for an exclusive audience in concise, compelling, and straightforward prose. Even the title of their new book, China Love You: The Death of Global Competition, fully displays that sense of clear communication, simultaneously showcasing the duo’s dry sense of humor and wit simultaneously injected into the information. Roach and Dr. Wu prove they’re not just experts in their respective field, but they’re also apt storytellers. It’s a formidable combination given so many books written on topics akin to what China Love You focuses on falter in the latter category.

There’s a sense the information is all there, but the relaying of it is virtually impossible for the author to do in a manner someone unacquainted and uninitiated can appreciate. As Roach and Wu brilliantly demonstrate time and again, what China Love You relays is critical for the reader to understand. What they’re talking about has profound implications for the future. “The two largest economies in the world are now China and the United States—which means that these two countries will have the greatest influence on the state of our planet, for many years to come. If the two nations cooperate economically and politically, then the entire world will see a period of peace and prosperity which it has never seen before.

And yet, surprisingly, those of us who live in these two countries know very little about each other,” Roach and Wu write. “…One place where normal Chinese and Americans work together every day is in business…And yet a story of American and Chinese businesspeople working together, and what they have learned from each other, has rarely been told. We are two businessmen—one Chinese, and one American—who began cooperating on a single business project several years ago. As we worked together, we became friends; and as we became closer friends, we opened up more to each other, and learned more about each other’s countries and customs and history.”

“It’s important to say, right here at the beginning, that neither of us is a professional policy maker or political figure. We are just two people who have worked together a lot on business projects, and talked together a lot, and spent a lot of time in each other’s countries and with each other’s colleagues and family,” they add shrewdly. “…while the first half of this book shares insights we have gained that will help Americans and Chinese people understand and appreciate each other, the second half presents a proposal, drawn from the ancient wisdom of Asia, for a new business model which states that the greatest amount of economic success for ourselves comes directly from making others successful.”

It’s through playing with this unique, empathetic, and humanizing angle that I believe Roach and Wu really do achieve what they set out to do. Sometimes the greater points a nonfiction author tries to make can get lost in the intellectual translating the reader has to do on their behalf. This can be due to aforementioned qualities highlighted above. But neither Roach nor Wu allow this to happen, and that’s to be seriously commended…