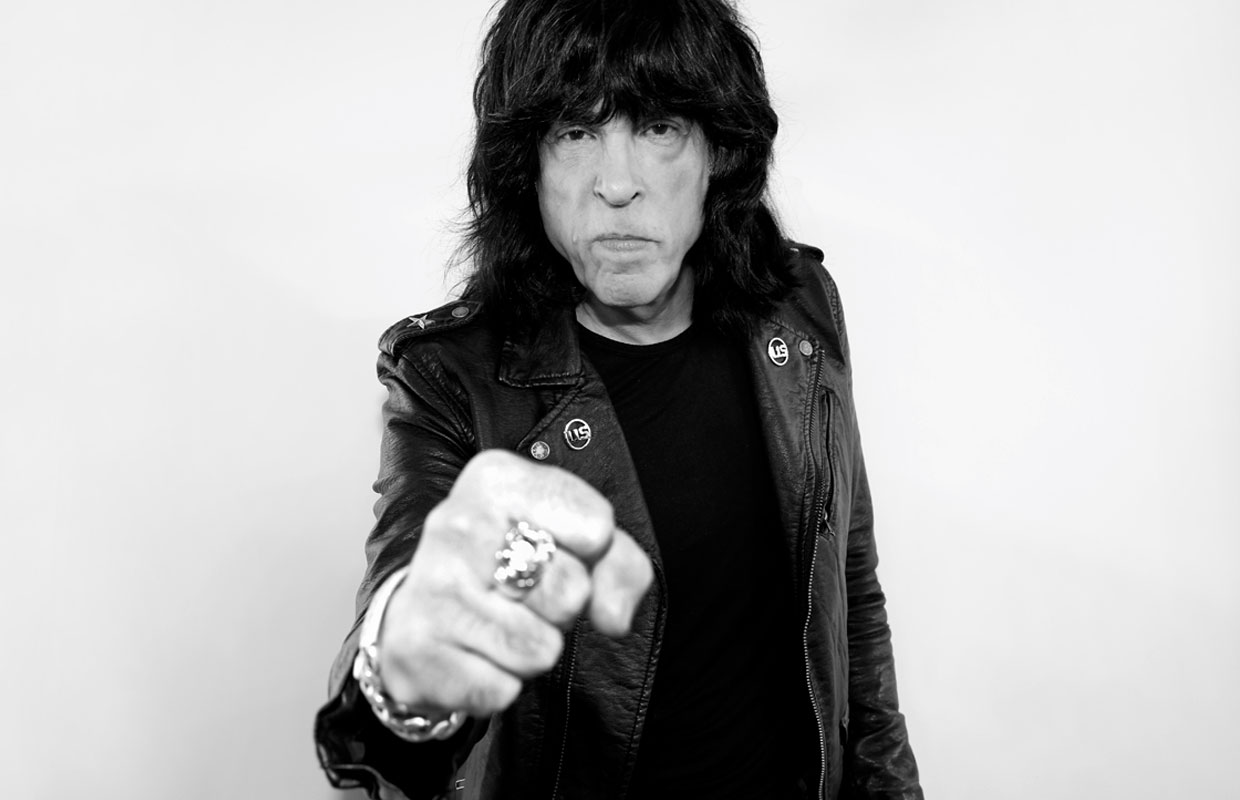 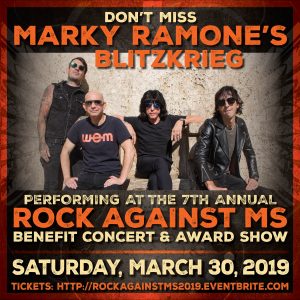 Respected and iconic musician Marky Ramone, recognized mostly as the drummer of one of the most influential bands in the history of this planet, The Ramones, is set to perform at “Rock Against MS, benefiting the ravishing disease multiple sclerosis. The extravaganza will take place on Saturday March 30 at the Los Angeles Theater.

The Rock Against MS Foundation, founded by Nancy B. Sayle, who is also fighting her own battle with Primary Progressive Multiple Sclerosis, seeks to construct and operate brick and mortar facilities which are called Rock Houses. The first Rock House is in the planning stages, and will provide free of charge, multiple programs and opportunities designed to heal the mind, body and spirit of all those whose lives have been affected by MS. Nancy continues to use her platform to bring out an incredible lineup of artists, musicians, comedians and friends in the industry for a once-in-a-lifetime night that raises awareness and support for people just like her whose lives have been impacted by MS. Funds from the 2019 Rock Against MS Benefit Concert & Award Show will be going toward building the first Rock House which will be built in Richard Pryor’s name.

The only living member of the Ramones to be inducted into the Rock and Roll Hall of Fame, and to receive the “Grammy Lifetime Achievement Award”, Marc Steven Bell, later renamed Marky Ramone, continues to encapsulate the very essence of punk music. Having played in bands including “The Misfits”, Wayne County”, “Richard Hell and the Voidoids”, “Dust”, just to name several, Marky is also a songwriter, DJ, actor and author.

This year he is celebrating the 40th anniversary of the movie “Rock ‘n’ Roll High School,” which he starred in. He recorded one of the most anthemic songs ever, “I Wanna be Sedated”, and went on to record 10 studio albums and play 1700 shows with The Ramones. In 2015 he released his autobiography, “Punk Rock Blitzkrieg: My Life as a Ramone.” 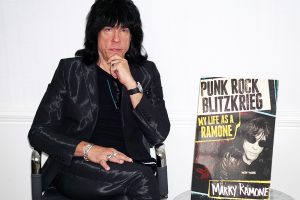 Marky Ramone continues to tour the world while also hosting a radio show on Sirius XM called “Marky Ramone’s 1st Wave Blitzkrieg.” In April 2018 the show was launched as a 24/7 channel.

I spoke with Marky Ramone regarding his experiences, his life and his role in “Rock Against MS”, where he is set to close the show with 35 of the Ramones hits, all chosen by him….and he was a total blast!

(Just a brief word on MS for those who aren’t familiar with the disease….. multiple sclerosis is an illness in which the immune system eats away at the protective covering of the nerves. It’s unpredictable and often incapacitating. It’s a disease of the central nervous system that disrupts the flow of information within the brain, the spinal cord and optic nerves…..)

Marky what can be expected at The 7th Annual Rock Against MS 2019?

It’s going to be at the Los Angeles theater in downtown Los Angeles. I am going to do 35 Ramone classics that I do when I tour the world. I picked them and they work. This band is the band that I’ve had for quite a while and we’ve done about 200 shows together. The reactions have been great. I wanted to be part of this cause because I know Nancy really did a lot of hard work with this, and she’s been a friend and I figured why not? It’s a good thing to be involved with and I’ve already been involved with a lot of different charities. This is one of them. I’ve done a few of these already for her and they’ve all worked out. It was great because it showed awareness and educated people about this insidious disease. That’s why I am on board and I’m sure that everyone else who is on board realizes that too. I was just on a panel there in LA with Johnny Rotten, Henry Rollins, Duff McKagan…. and we did that thing about the punks that came out on Epix. I just got back and now I have to go back again. I’m in Brooklyn right now, in Brooklyn Heights. You know I’m at a point in life where I can do what I want to do. If somebody asks you to do a charity, it’s very hard to say no. You’ve got to realize that you’ve been lucky, you weren’t afflicted with anything and that others have been. If you can help them in anyway I’m on board. That’s all I can say. I did a charity event for Autism Speaks, I did a charity event for veterans without limbs, so there is a lot of different things out there that people can involve themselves with to make the world better.

Everyone is on board, the sound guy, the monitor man, the roadies, the stage manager, people that are involved with the show etc. They are all putting their time in because of the charity.

I understand it’s an Orange Carpet event (Multiple Sclerosis Awareness in represented by the color orange)?

There usually is. There’s a Carpet, you walk on it and you make cracks with the photographers. It’s fun. I don’t care if I walk it or not, but I like doing it because it’s funny the way they make you turn to the right turn to the left. I’m like a robot when I do that so it’s pretty cool. You see the same people a lot of the time and you become friendly with them.

What have you been up to lately?

I’m off now and I have two radio shows on SiriusXM. One on the 1st Wave, and the other one I have my own Internet channel. It’s on 24 hours a day, seven days a week. I’ve been nurturing that. The 1st Wave has been on for about a year already, but I’ve been a DJ on Sirius for about 15 years. Now I’m scheduling a tour for the summer for about seven or eight weeks to tour places that I haven’t been. I’ve toured Russia, China, India and it was unbelievable. It’s just unbelievable when they know the songs and they sing along with them. I want to go to places that I’ve never been, so I’m working on that. For now that’s it, that’s enough.

I did 45 Ramone songs in a row in Argentina, nonstop. So that was an ultimate fantasy, that I was able to physically do that. Here I am playing 35 songs because of the involvement of other people, you have to give them time too. I will be closing the show but obviously there is a curfew. So my ultimate stage fantasy was to be able to endure that 45 song Ramone Setlist, which was about an hour and 50 minutes, without stopping. No discussion about how’s the weather, how are you feeling, is everyone having a good time. It was just the music. That’s what I like to do. But I’m going to be doing that in LA that night, but 10 songs shorter. So basically, that was my fantasy, I did it, and then you move on to something else. 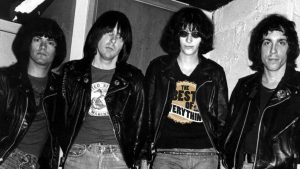 Who is the most fun band that you’ve ever played with?

Oh, great question. My band opened up for Guns-N-Roses. They had reunited and this was in Columbia. It was a really good show. That was one. Also, Motörhead. Lemme was a good friend and he wrote a song about us called “Ramone”. He was a big fan and it was always a pleasure to be around him. He was very informative about music and he was very jovial. Then unfortunately he passed away. Very sad. So that was cool when they played with us. Also, Iggy opened for us in Brazil. It was very good to have Iggy there on the side of the stage watching us, and we were watching him. That was a really good time.

You also played with some other cool bands like The Misfits and Wayne County?

Wayne County, I joined his band in 74. He was still Wayne County. That is when punk started in New York City. Out of all the bands and out of all the people I’ve played with, now it’s Jayne County so I should be more respectful, I had the most fun with her. I’m glad to see that she’s back, and healthy, and willing to continue to perform again and still be involved in the industry.

Is there anything else that you’d like to speak about that I haven’t covered?

It’s the 40th anniversary of “Rock ‘n’ Roll High School. I definitely don’t remember making it. Unfortunately, the other three Ramones that were in the movie have passed away, but they would’ve been very happy to see that the movie definitely holds up today. They would be very grateful to know that.

How does it feel to have been in a band that there is not one person on earth who doesn’t know The Ramones? Your band is one of the most influential bands on the planet.

When you’re a kid playing you never think you could get to this point. It took a while, because the band was so different and unique compared to the stuff that was going on in 74 and 75. So it took time. Then England caught on and California caught on and then the rest of the world caught on. It is the bands that we influence that were the ones in interviews that cited us as an influence. Then a lot of the younger generation punk rockers picked up on us, and that helped. Bands like Green Day, bands like Rancid, and even the metal bands really liked us a lot. That was great because I don’t think there should be any boundaries or categories in music. So, they would’ve been very grateful to see the Ramones at this point, the popularity they have.

Yeah well, you’ve still got the Stones kicking. Which is good because they make real music. They are not relying on samples and computers. They are making real music and you can tell by the human element. The emotional element when they do play. A lot of bands are still out there which is great.

You have Billy Idol playing in New York on Wednesday….

Generation X is one of the integral parts of the UK scene. Billy also has a radio show on SiriusXM. It’s the same station I am on. He’s on every two weeks, then I am on every two weeks. So we alternate weeks. It’s pretty cool to be in that kind of company.

If you could tell your fans of followers anything, what would it be?

I hate to sound cliché but you’ve got to believe in yourself. Follow your dreams. Don’t let anybody stop you from obtaining them. Also stop the hate. We are all together we live in one country and we all have to get along. We should take advantage of that because I’ve been to almost every country and this is the greatest country. We should take advantage of that opportunity. 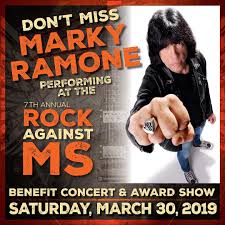 Rock Hall of Fame and Grammy Award winning artist Marky Ramone is back in LA for the first time in 5 years as Marky Ramone’s Blitzkrieg headlines the 7th Annual Rock Against MS Benefit Concert. The concert will also feature our star-studded tribute to the artists that we lost in 2018.

Purchase tickets for the event here: