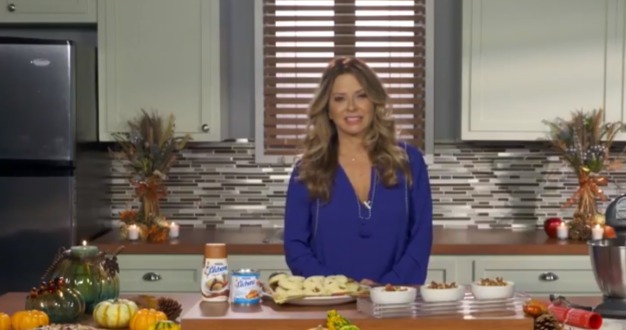 Ingrid Hoffmann may be best known for her series Simply Delicioso on the Food Network and her Spanish-language cooking and lifestyle show Delicioso on Galavisión, but this actress, entrepreneur and contributor to a monthly culinary column to People en Español loves to show people how to cook using popular Latin ingredients such as La Lechera by Nestle.

Some of the amazing, yet easy-to-make recipes she shares with us include: Dulce de Leche Pumpkin Flan, Apple Raisin Cake, Yam & Pecan Dessert and Dulce de Leche Thumbprint Cookies.

Ingrid Hoffmann was born in Barranquilla, Colombia, but grew up in California.  Her mother, Yolanda is a Cordon Blue-trained chef and she began cooking with her mom when she was a little girl..

By the age of 20, she had worked as a model and appeared in 16 telenovelas.  She relocated to Florida and opened La Capricieuse, a high-fashion luxury boutique in Miami.  In 1993, she, her mother and a couple of business partners opened Rocca, a restaurant that cooked its food tabletop on heated lava rocks.  Yes, it is that cool.

She published her first cookbook Simply Delicioso: A Collection of Everyday Recipes with a Latin Twist in 2008 by Clarkson Potter. She published it in Spanish as well.

Ingrid started hosting a cooking segment in Miami in 2002 and earned her own show Delicioso in 2005.  A day after she appeared on an episode of Martha with Martha Stewart in 2006, she was contacted by the Food Network.  Her show Simply Delicioso debuted the following year.

She is actively involved in many charities and philanthropic endeavors.

The lovely and talented Ingrid Hoffmann spoke with Michelle Tompkins for The Hollywood Digest about her life, early work, current projects and offered tips on must-have baking tools,  which ingredients everyone should keep in their pantry, showed us how to use La Lechera products in some yummy recipes and more.

Ingrid Hoffmann and more delicious recipes may be found here.