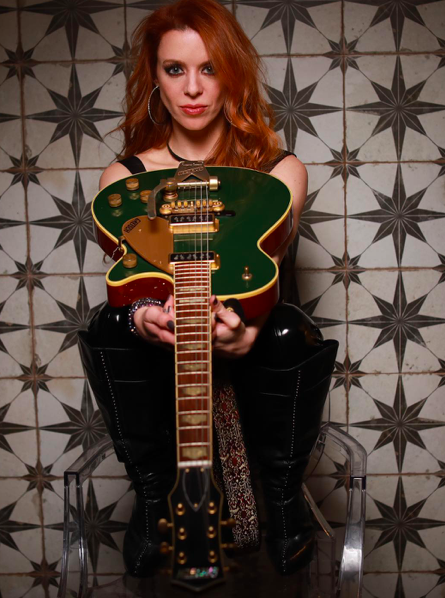 Born and raised in Grand Forks, North Dakota and now based in Los Angeles, Dani Hagan has been developing her own brand of soulful rock while selling out some of LA’s most iconic venues.2021 was her breakthrough year, releasing a three-track live EP ‘Jam In the Van.’ This year she teamed up with famed producer, Mikal Blue (OneRepublic, Jason Mraz), and is releasing a series of singles leading up to the album release. Dani Hagan is just getting started. Her versatility as an artist is never predictable and always intriguing. She has a long career ahead and is paving her own unique path, transcending genres,and always delivering with complete authenticity.

Honestly, I don’t think I had a choice in the matter in terms of whether I would be a musician or not. I was always consumed with music since I was a kid. But I guess it was when I was working as an actress in film, I was doing well and enjoying it, but it wasn’t fulfilling me. I recognized that I was missing the live audience aspect. You just can’t replace that energy and connection that you feel when you perform music in front of a crowd. That was when I picked up my guitar and started performing around LA. Writing music and performing my songs is the ultimate expression for me.

I live for connecting with people through music, so when someone is moved by my music in some way, or finds that my songs express their own personal experience, I feel like I’ve achieved my purpose. I’m also learning to love social media because it opens up opportunities to have a conversation with fans. Now that my fanbase is growing, it has been really exciting to meet fans after the show, to chat and discover this growing community.

When the audience sings my lyrics and melodies back to me, it just lights me up, it’s incredible to have the crowd sing with me. It’s an absolute adrenaline rush! I love an interactive crowd that gets into the performance with me. But I also love those intimate shows, where the audience is just hanging on every word and note of the song, when that captivated stillness is so thick you can feel it. Either way, when music gets everybody radiating in some way, it’s such a high for me.

I have had some incredible highlights in my career so far, such as the cool venues I’ve played like Hotel Cafe and Carnegie Hall, and getting to go to London to shoot my music videos. But my favorite part is truly the work between those highlights. I love the creative process, from writing the songs, to bringing them into the studio and collaborating with incredible musicians and watching the songs come to life. I cut this album at Revolver Recording Studio with Mikal Blue and a jaw dropping roster of musicians. It was such an honor. And of course, rehearsing with my band, The Reverie, and performing these songs live…clearly I’m not capable of picking just one highlight, I’m just so filled with gratitude for this entire journey.

Absolutely, there are always hidden personal references and messages in my songs. I always wonder if people pick up on them, especially those who may have inspired the lyrics. My song Deeper is a good example of this. There are layers to the lyrics, clever double entendres, if I do say so myself, as well as some secrets revealed. It’s fascinating to me how people can sing all the words to the song, and somehow gloss over what the song is about. I’ve learned that that gives me some freedom lyrically to take some risks, making the song more interesting, both for me and the listener. Sometimes it’s just fun to see what I can get away with, haha!

India Arie inspired me to take songwriting seriously and to pick up a guitar. Seeing Grace Potter perform live helped me discover my own stage presence and how liberating a performance can be. ZZ Ward really inspires my overall sound. And Nothing But Thieves has recently influenced the direction of my band.

When I really connect into the story I’m telling through music, that’s when the audience really connects with me. That’s what makes a performance successful. You can tell when someone is just going through the motions versus actually expressing the song. So I always have a pre-performance ritual to ground me into the moment, to really be present, before I get out there to do what I do, whether it’s on stage, in the recording booth, or even when jamming with friends in the living room. I also think it’s important that the live performance is just as solid as the recording. In a world full of bedroom pop stars on tiktok, I truly value an artist who can hold the stage with a live audience and deliver a captivating performance, and I hold myself to a high standard in that regard.

I am a goal oriented performer. I love having something to work towards. So if I know I have studio time booked or a show coming up, I really put in the effort to condition my vocals and sharpen my instrument skills in the weeks leading up to the event. Otherwise, I can get a bit lazy with my vocalizing schedule. Right now, as we are planning for a tour, I make a point to carve out personal rehearsals for about 6 hours throughout a week. My band and I are in such a groove together, we usually only need one rehearsal to lock into each other before a show. But I’m always singing throughout the day, playing with melodies. So it’s never ending.

When it comes to a life in the arts in general, you really have to love the process. Love the work between the gigs. If you are going to pursue it professionally, it’s got to be something you truly love and can’t survive without doing. Say yes to all the opportunities until you have a reason to say no. Look for the lessons instead of the answers, but I guess that’s just life advice in general.

I have had a steady stream of career shaping mentors along the way. Jeff Barry (rock and roll hall of fame songwriter) really helped shape me as a songwriter. John Ferriter, who unfortunately passed away a few years ago, developed me as an artist and helped me shine brighter than I ever dreamed I could. My co-writers (Mikal Blue, Ely Rise, Aaron Medina, Art Santora) always elevate me and inspire me to bring some magic to the table. I don’t want to let them down, so it brings out the best in me as an artist. Chuck Ortner (lawyer for the Grammys) introduced me to a level of the entertainment world that I didn’t know I could be a part of, opening a world of possibilities to me. My band has helped me find my sound, my music has never sounded more like mine than when I’m performing with my band. And my parents. Their unwavering trust and belief in me has given me a confidence that has carried me to where I am. I’ve got a couple of Angels on my side, who like to stay out of the spotlight, but without them, I can’t imagine where’d I’d be. They have elevated me as an artist and as a person. I’m so grateful for all these incredible influences in my life.

Sometimes I wish I would have focused my creative energies into one stream, curious if that would have gotten me to where I am faster. For years, I was balancing acting, singing, and dancing. But truthfully, I think having that array of skill sets adds depth and complexity to what I bring to the stage as an artist now. I think I would have benefited from having more formal training on my instruments (I’m primarily self taught) as well as studying music theory more intensely. I am a very intuitive musician, but I wish my intuition was backed up with more knowledge. I’m still young, there’s still time, haha.

Well, the music industry is quite the money maker, yet the artists in the industry are usually the last ones to see any of that money. I’d like for that to change of course.

I’d like to think my peers see me as hardworking, disciplined and passionate. I hope they see me as talented and inspiring. But I pride myself on being really supportive of my peers, the way that I hope they are supportive of me. This is a tough industry, and there is plenty of room for all of us to be successful. It’s really exciting to see us all rising up together. It’s like we’re living out a chapter in a history book that’s being written right now.

I certainly have a side of me that comes out on stage, this confident, sexy rocker. ButI definitely have a personal side that is reserved for those closest to me. I am deeply loving, emotional and whimsical. I can be soft and silly, I have a playful nature and radiate love. My friends would say I have a sparkle to me. At least, that’s how I hope they would describe me.

I am hyper creative. So even if I get burned out musically, I still need a creative outlet. So I picked up a paintbrush a few years ago, and it turns out I love to paint. I tend to get very crafty. Also, I’m obsessed with Pilates. As a former dancer, my body craves movement. Pilates has replaced my plies on most days. But I always do one or the other before I get on stage to ground into my body as part of my warm up.