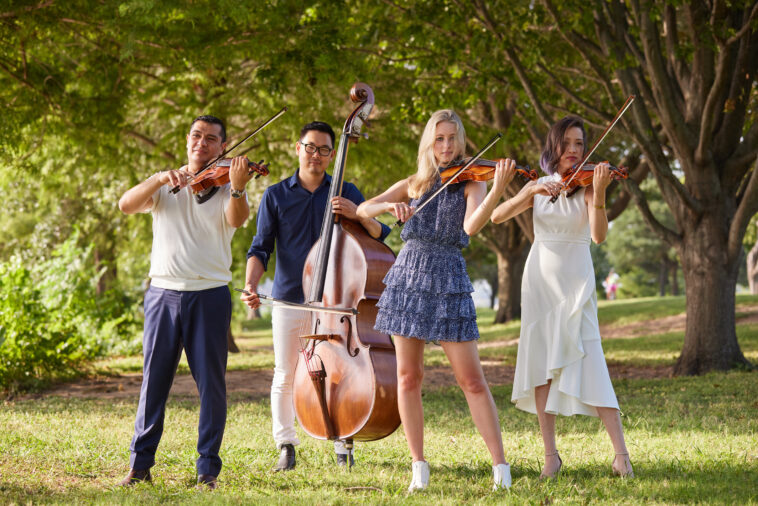 “When The Party’s Over” by Dallas String Quartet

Dallas String Quartet have found that sweet pocket that combines their own talents and artistry and then put their own classical spin on modern songs. “When The Party’s Over” is their latest take, and it’s a sonic journey that lasts. The party is certainly not over for DSQ, a rousing group that elevates not only the violin and cello, but everything they touch. “When The Party’s Over”, a Billie Eilish tune, is an interesting cover because not only has it been out for a hot minute, but the pop song has even more lasting power when it gets the instrumental treatment. Like peeling away a new chapter, DSQ found a way to tell their story in this remarkable hit.

Led by Ion Zanca, DSQ takes this pop song to a new level. Whereas some of their previous hits have relied heavily on violin work, and even some samba or brass peppered into the mix, this track is a lovely combination of violin and cello. These riveting moments, pulled together like satin ribbons woven into each other, are so lush. The strings can be blinding like sun rays, but also moving in an undercurrent formation like rolling thunder. This song vibrantly creates movement and depths that Eilish herself created with her voice. To hear this song, and presented in this way, is to feel that commitment to a relationship that has lost its luster.

As the saying goes, where there is sadness, there is always hope. DSQ dazzles most when they are in the thick of the song, when the bridge of the song calls for more drama and bolder actions. When you listen to this song, you sail away into its blissful abyss. It’s a song that cultivates the need to take it all in – colors are brighter, if you’re barefoot, the ground feels more connected and if you’re with your family, the heart beats stronger. This song empowers the senses. You can’t buy the honesty and emotion that is pouring from these musicians’ instruments. With all the computers in the world, every beat at their fingertip and every tool to make music sound ‘perfect’, it’s obvious that taking a step back and really using traditional instrumentation is beyond powerful.

DSQ’s “When The Party’s Over” is arranged by Pentatonix co-creator Ben Bram. The band has a music video to showcase their moving rendition, as well as magnify the song’s intent. Filmed outside, literally on a cliff over an ocean, the music video and audio features guest cellist Marza Wilks. DSQ, whose tagline is ‘Where Bach Meets Bon Jovi’ is Zanca (violin), Melissa Priller (violin), Eleanor Dunbar (violin) and Young Heo (bass). Their previous single releases have included “Firework”, “Bittersweet Symphony”, “Don’t Stop Believin’”, “Hey Soul Sister” and a slew of others. They have nearly 200-thousand monthly listeners on Spotify and show no signs of slowing down. They are, of course, based in Dallas, Texas, but can be found touring the globe. “When The Party’s Over” is the perfect excuse to keep the (calming) party going.