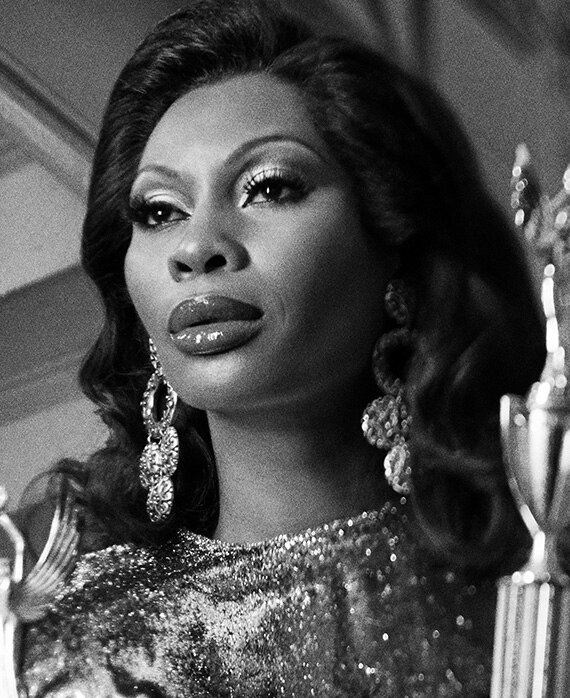 “We’re All A Family”; Dominique Jackson On POSE, The Struggle, And How Ballroom Gives Us Life By Nathan James

There was a time, just over three decades ago, when an underground village of the Black and Latinx LGBTQ community, born out of a need for refuge and love, was a sliver of light and hope amidst one of the darkest eras to befall since before the Stonewall Rebellion.  That’s the world depicted by the Emmy-nominated FX TV series POSE, whose runaway success has introduced the genesis of the Ballroom culture to generations of viewers not yet born when the extended families known as Houses began their variegated appearances in New York City.  The show’s two seasons (it’s been picked up for a third) are both poignant and joyful, as the cast forms chosen kinships and rivalries with each other, set against the ominous backdrop of the looming HIV/AIDS holocaust, rampant homo- and transphobia, and an indifferent or hostile society.  Among the ensemble cast, comes one gifted trans actress and accomplished model whose life is right out of the POSEstory arc.  In achieving her artistic dream, she’s remained graceful and true, weathered but not battered by the arduous journey to stardom’s doorstep.

That’s Dominique Jackson, of course, late of the House of Abundance, and founder of the legendary House of Wintour on the show, who draws on her own life experience to illuminate her character, Elektra Abundance.  “I have gone through such struggles to get here,” Dominique tells The Hollywood Digest, “and my story is her story, too.” Elektra is bold, feisty and fierce, and Dominique gives her a humanity despite Elektra’s brashness, that makes her a quintessential House mother.  By Season 2, with many of the characters fighting the virus and dealing with the other stresses of that era, Dominique’s role is even more pronounced.

Born in Trinidad and Tobago, Dominique emigrated to Baltimore at 18, when her family scorned her gender identity.  There, she discovered the ballroom community.  When Dominique came to New York City, she joined the House of Sinclair, which was a sine qua non during that turbulent period in her journey.  “I always stayed focused,” Dominique says if those early 90s years, “no matter what was happening with me.  I had no money, I needed funds to pursue my career, nobody could help me, but I stayed focused.”  Like many trans individuals of that era, Dominique was in survival mode—sex work, scrounging whatever financial help she could—to carry through the difficult interim, until her talents found expression.

Acting was natural to Dominique, and her perseverance paid off.  Early roles included the Health Specialist (a teaching moment!) on writer/producer Dwight Allen O’Neal’s Christopher Street: The Series(as Tyra A. Ross), My Truth, My Story, and Strut, a reality show that earned Dominique a GLAAD Media Award nomination.  Then came POSE,a definitive moment in her climb to fame. From its inception, Dominique says, there was a special bond between the cast members and crew, which includes the nonpareil Billy Porter(Pray Tell) of Broadway’s Tony-winning Kinky Bootsmusical, Indya Moore, whose portrayal of sex survivalist Angel Evangelista is edgy and spot-on, and Dyllon Burnside as Ricky Evangelista.  (Burnside and Porter stole the show with a steamy, provocative sex scene a couple of weeks ago that raised some of the more prickly issues of the period).  The on-set chemistry, Dominique intimates, goes beyond just colleagues at work.  “We are a family,” she observed, “It’s all one love on POSE.” Dominique is profoundly affected by her work on the show, and she underscores its value in teaching an important part of ballroom (and LGBTQ) history to its Millennial audience.  “It was a time of marginalization, prejudice and hatred,” the actress notes, “and we coped within the hierarchy of our Houses.” That matriarchy gave the children a sense of self and belonging, even as the House Mothers mentored and inculcated them along the way.  POSE is long on authenticity, with writer Janet Mock(a longtime trans activist in her own right) and her team drawing not just upon Jenni Livingston’s classic Paris Is Burning, but on the lived experiences of its cast, and actual ballroom legends, like the late Hector Xtravaganza, a technical advisor on the show.  All the pathos of the era is captured in detail, even the ever-present danger, as Candy Ferocity’s (Angelica Ross) sudden, shocking death reminds us.  Dominique and her cast mates deliver reality, but with defiant warmth and desperate yearning.

From that time to this, Dominique’s upward trajectory hasn’t diminished her connection to the community she loves.  You can still see her returning to her roots with ordinary LGBTQ people, as she has always done.  You might find her at Harlem Pride, or participating in a transgender forum, keeping herself engaged.  It’s all part of Dominique’s complete approach to her life.  “I apply myself to the fullest,” she says.  It shows, eloquently.

POSE will return for Season 3 in the spring of next year on the FX Network.