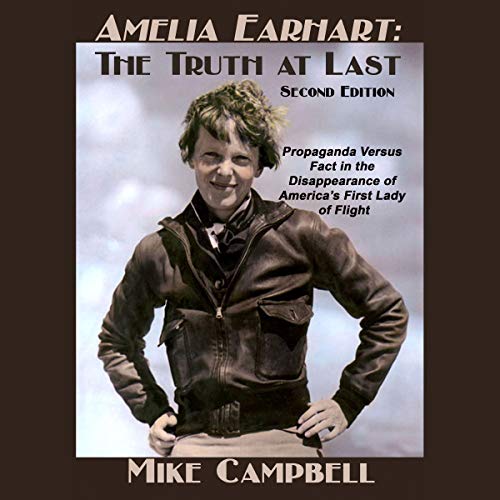 Nearly everything the American public has seen, read, and heard in the media for nearly 80 years about the so-called Amelia Earhart mystery is intentionally false or inadvertently misleading. The widely accepted myth that the disappearance of Amelia Earhart and Fred Noonan during their ill-fated world-flight attempt in July 1937 is among the greatest aviation mysteries of the 20th century is an abject lie, the result of decades of government propaganda that continues unabated to this day.

This second edition of Amelia Earhart: The Truth at Last adds two sections, a new foreword, and the most recent discoveries and analysis to the mountain of overwhelming witness testimony and documentation presented in the first edition of “Truth at Last”. The result is the most compelling, comprehensive presentation of the indisputable facts that reveal the stark truth about the Marshall Islands and Saipan presence and deaths of Amelia Earhart and Fred Noonan – a tragic story that American’s ruling class still doesn’t want the public to know, for reasons revealed in Amelia Earhart: The Truth at Last.

Amelia Earhart: The Truth at Last dismantles and debunks the popular theories that Amelia Earhart’s Electra crashed and sank off Howland Island on July 2, 1937, or landed at Gardner Island, now Nikumaroro, where the suddenly helpless fliers died of starvation on an island teeming with food sources.

“The Truth at Last” presents many remarkable new findings, eyewitness accounts, and never published revelations from unimpeachable sources including three famous U.S. flag officers and iconic newsman and Earhart researcher Fred Goerner’s files that reveal the truth about Amelia’s death on Saipan, as well as the sacred cow status of this matter within the US government and media establishment.