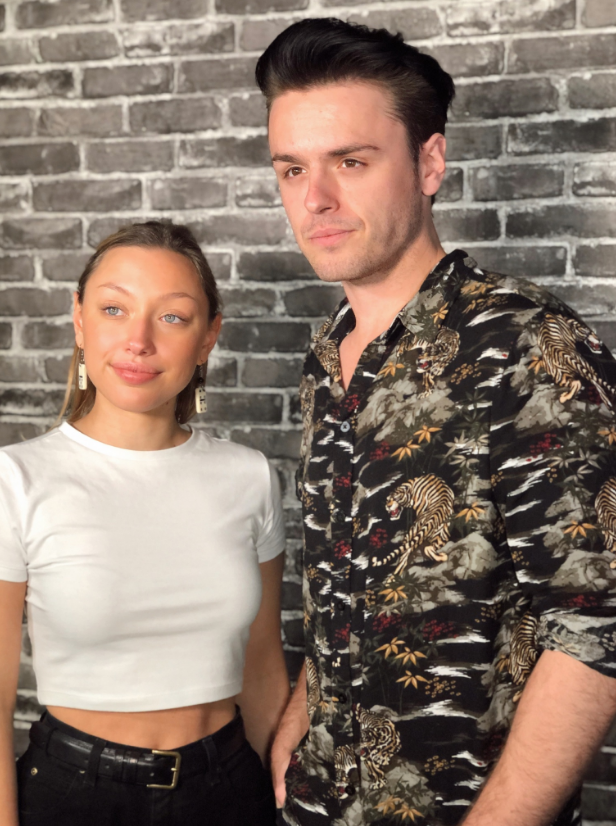 New York-based indie-pop duo MIDLO has been making big waves in music’s pool. First, with the release of “Emotional,” which not only graced Spotify’s New Music Friday USA Playlist, but recently exceeded 1 million streams on Spotify, and second, now with their new single/music video “Waste Your Time.”

MIDLO began life as the solo project of Dan Middleditch. But after hooking up with Renata Baiocco on “Emotional,” the two decided to join forces because of their palpable musical chemistry.

The Hollywood Digest caught up with one-half of MIDLO to talk about how he got started in music, his influences, and the inspiration for “Waste Your Time.”

Let’s see… at least one of my guitars for sure! I also am very active and I always have this rope called The Golden Teacher that I exercise with. Last and certainly not least I wouldn’t be able to live without my incredible music partner and one of my best friends, Renata Baiocco! Cheesy, I know.

What artists are you listening to right now? How did you get started in music?  What’s the backstory there?

I’ve been listening to a ton of bluegrass, country, and Americana actually. Artists like Daniel Donato, Billy Strings, Molly Tuttle and Sierra Hull! Super incredible musicians and singers. My musical taste is super eclectic so I’m really listening to anything from Top 40 pop to Swedish power metal like Amaranthe, Nightwish, etc.! I got started in music when I was 9 years old and I picked up the clarinet, but I really started taking it seriously when I picked up the guitar at 12 and started finding my voice screaming at the top of my lungs to Green Day and Nirvana, ha!

What musicians/singers influenced you the most?

As you can probably already tell, while MIDLO is a pop duo, I personally have a major draw from so many different sources. Though I’d have to say as a musician, I was heavily influenced by a lot of progressive rock, particularly Porcupine Tree and their frontman, Steven Wilson.  There’s such an emphasis on musical and creative integrity, while the music was still very accessible. My top influences as a singer are Brandon Boyd from Incubus, Joe Cocker, Matt Corby, and Jarle Bernhoft. That’s not necessarily from a sound perspective, as no two voices are the same. It’s more that they all exude such a uniqueness that really made me want to find my own sound and not try and emulate someone else.

Is MIDLO’s sound evolving? If so, how and in which direction?

Well, MIDLO was originally my solo project, so with the incorporation of Renata’s writing, it’s obviously going to take a different shape. Renata is an insanely talented writer with so many stories to tell. Musically, I think we are going to stray further and further away from the “pop” sound, while still maintaining an accessible sound. The entire music world has been flipped on its head and we will be adapting accordingly.

Music is cathartic. You have a bad day, write about it. You have a good day, write about it. It’s a form of communication, whether it’s us with an audience or just between Renata and me on stage with our band, if we play with one, or really any combination of that. All that said, it’s the only thing I really know how to do so it’s either this or float around in space with no purpose.

What inspired your latest single, “Waste Your Time?”

So, this is a fun one! I was telling this story to our co-writer and producer, Mikey Wax and Jacob Lee, about a girl I was seeing, but we had both just gotten out of something serious and it was just never going to work out. Right thing at the wrong time, you know? We decided to make that the topic of the song but me, being me, I refused to write a surface level pop song. Because of that, I had this concept deriving from the multiverse theory that technically, in an alternate world this situation would’ve worked out. The narrative takes place from two different realities, neither of which are the one where it works out. This was also the first song where Renata wrote on it, so it’s the first cohesive iteration of MIDLO as a duo. The song was affectionately called “Rick and Morty” because of that whole concept. I’m a huge fan of the show! I could go further into this subject, but I’ll keep it there in this interview and if anyone reading this wants to know further, slide into our DMs on Instagram!

What is your songwriting process with Renata?

Typically one of us will come up with an idea, usually me with a guitar riff or Renata with lyrics and a melody. We usually work it and bounce stuff back and forth until we have some structure and we will demo it out and send it to one of our producers and co-writers to get feedback and further polish the song!

How are you handling the coronavirus situation?

We have been very fortunate to be in the same city during all of this. We have been building a stockpile of music, and hopefully when a sense of normalcy is reached, we will resume our live schedule!

When may your fans expect new music?

Very soon! Our next single “Get Away” will be released within the next few weeks! Stay tuned!