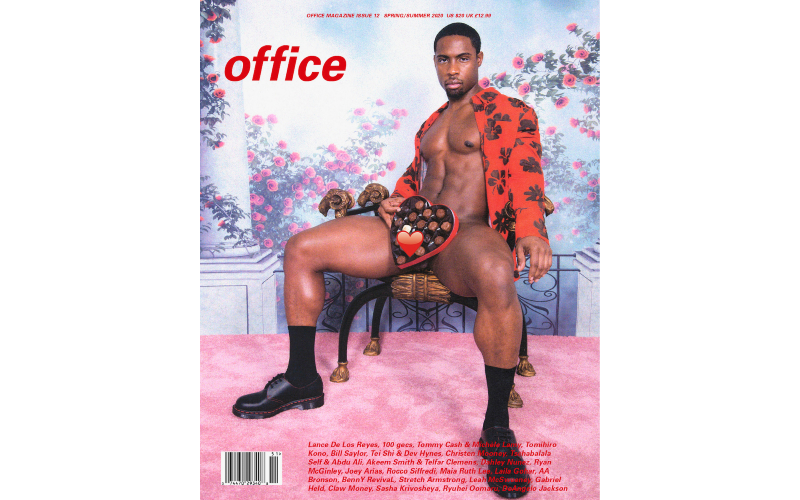 Stunning LGBTQ+ film heartthrob DeAngelo Jackson is on top of his game as the weather turns warmer and brighter.  He’s taking his career in exciting new directions, with a scorching Office Magazine cover and feature story, plus an engaging conversation about the life and culture of the LGBTQ POC community in the new MOBItalks series, part of the Mobilizing Our Brothers Initiative (MOBI)’s continuing dialogue.  Jackson is an accomplished adult cinema actor and model, who is currently broadening his horizons.  “I was really honored to do the Office cover shoot,” Jackson tells The Hollywood Digest.  “It went really well; the shoot was fantastic.” The magazine features him in a fascinating article about artistic advocate Christen Mooney in its current issue.

Although his public persona is open and revealing, Jackson says he’s a different person in everyday life.  “I’m really an introvert, when I’m not working, just a normal kind of guy,” he reflects.  “But I’m not shy,” the actor adds. He’s been shifting towards mainstream modeling lately, which has long been one of his goals.  “I was always going this way,” Jackson says, “and I’d love to do something like New York Fashion Week!”  Comfortably at ease whether fully dressed or provocatively revealing, Jackson is also trying to change public impressions about adult film actors and purveyors of pleasure.  “I want to be more involved in changing the perception of sex workers,” he states, “and I think that would be good for all of us.”  For the MOBI digital series, Jackson keeps it real and unvarnished.  “I was impressed so much with MOBI that I wanted to be involved.”

MOBI is a “series of curated social connectivity events for queer people of color to see their holistic self while promoting community, wellness, and personal development” that focuses on the New York City LGBTQ+ community.  Jackson says the conversation he did was “more than just a byproduct” of his burgeoning career.  He’s had time to evaluate the direction he wishes to take during this ongoing COVID-19 pandemic.  Dealing with quarantine rules has been a challenge.  “I just want to get out and about,” Jackson admits.  “I’ve been going a little stir crazy.”  Like almost everyone, the plague has rearranged Jackson’s original plans for 2020.  “I was supposed to go to film shoots in Montreal and Las Vegas, but they’ve been postponed,” Jackson says ruefully, “and I missed my vacation, which was supposed to begin on April 15.”

Yet, like most of us, Jackson is looking forward to sunnier days, building on his new forays into modeling and advocacy.  “There will be more things going on behind the scenes,” Jackson promises,” and more for when we can all come back out.”  Look for DeAngelo Jackson on Twitter @DeAngeloJxxx and on Instagram @theonedeangelo.  We’ll be following him, too, with great interest!