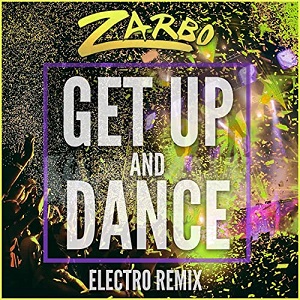 It’s amazing how a remix can inject an additive of fuel to a song, even if the original recording was already perfection. In the new song “Get Up And Dance (Electro Remix)”, Alexander Zarbo, performing as just Zarbo, the listener’s spirits are lifted above the ceiling. If you love The Bee Gees song “Staying Alive” or Enrique Iglesias’ “I Like It” that features Pitbull, then “Get Up And Dance (Electro Remix)” will surely invigorate your playlist.

Zarbo, a Canadian power pop rock trio that recorded the original “Get Up And Dance” (released 1985) has Alexander Zarbo returning to the debut album, A-Z Collection, and remixing all eight songs. The explosion of sound, led by the venerable Zarbo’s bass guitar licks, sounds the alarm for the listener to experience unabated jubilation. Lyrically, he doesn’t hold back much and the song structure features short verses, but a long chorus. It’s unusual excitement, an emotional contrast, after day after day, working for nothing, he sings. Get up and dance and get up and dance, he slays in the chorus. The chorus also features the lines how does it feel, how does it feel, when you get up and dance…when so many people glance…when you get up and dance. He’s got the listener so tuned into the cadence and the rhythm of the song, that he words almost feel and sound hypnotic. It’s like you’re in a trance and the words just keep invading your mind, as your body dances the night away. It’s hard to escape the magic of this song.

Not quite futuristic, but still a dizzying amount of extra EDM infused sonic blasts, this updated version maintains the original’s immediate connection. The listener is never not in a good mood with Zarbo in the driver seat. Fun doesn’t seem to describe the feeling…it’s euphoric. This song has this infinite bounce and who knew that just by saying the simple words get up and dance it releases endorphins in the brain that make you want to, wait for it, get up and dance. Easy does it? Right. When Zarbo sings he reminds me a bit of what you’ve heard from 70s disco-era songs, but it makes sense because again, the original track is from 1985. The modern influences in this new 2.0 version lie somewhere between what you’re hearing with Dua Lipa and a tad of what The Chainsmokers are releasing. Not a perfect fit, but in the same vicinity. Zarbo does a great job of really moving the listener along, the motion and emotion in the song is bursting at the seams.

Overall, Zarbo’s “Get Up And Dance (Electro Remix)” is one of the bright spots to 2020’s music releases. You don’t have to think about anything other than the bass grooves and the stylish music. It’s the mojito to your straight vodka drink; it’s the spruced up Prius to your reliable Acord. Behind that mic and keeping the party alive is Alexander Zarbo. This song can shake up any playlist or mix tape.

The music of Zarbo has been heard all over the world in partnership with the radio plugging services offered by Musik and Film Radio Promotions Division.  Learn more https://musikandfilm.com