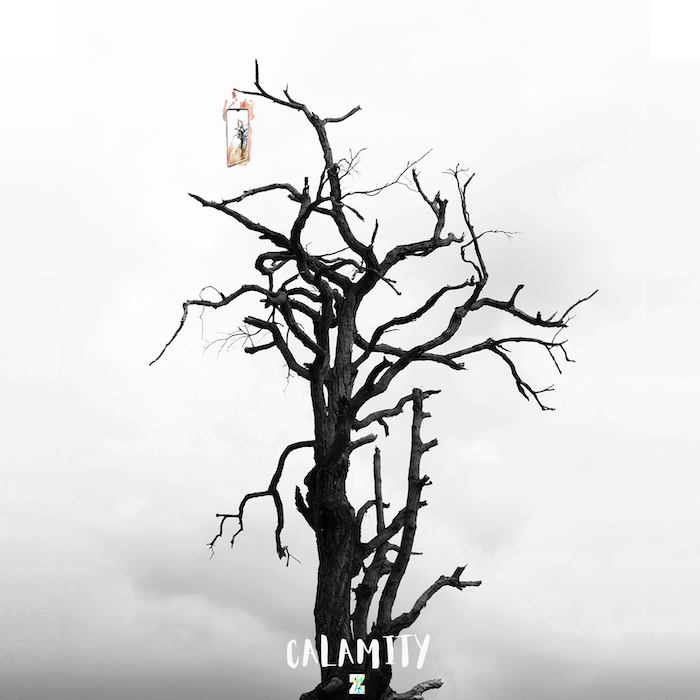 Z has been active since 2018, building a steady stream of singles that led up to the release of their debut record, Calamity. The record has seen positive reviews (particularly it’s single,“The Song Of I”), which has garnered the band a small following online. Z is currently busy promoting Calamity, developing a mobile app for release early this year (a game and narrative experience), writing a follow up, sophomore album and touring. The band describes their sound as “noise rock with hard rock, glitch and grunge influences.” Album themes center on destruction, solitude, amnesia, wistfulness and anger. Z is a conceptual band–it’s the story of an amnesiac who wakes up trapped in the internet, making friends and enemies, as they try to survive.

“I want it, I want it, I want it – I hate you, hate me…. I’m stuck in hell” at least that’s what I could decipher from the beginning track “Me Knowing Tomorrow.” This trippy, thick bass-y song opens up the album with a truly unique sound. I’d say grungy yes, but there’s a bit of electronica in here somewhere. On “The Song of I” you’ll hear more of the band’s thick, bass/drum rhythm section, and a play of soft and hard rocking moments. The background synth parts were chilling, but what I thought was even more haunting, was the singing. Overall, this tune is grittier and more in your face. “Void Prince” has got a great, solid drum beat and bass line.

This one kind of reminds me of a cross between Smashing Pumpkins and Nirvana. But really, Z’s experimental, early alternative vibe reminds me of the Pixies. One of the best early alternative/indie bands…ever, in my opinion. The words to “Mega Bytes” felt to me like someone on the brink of going insane. “Safe inside my head…. Safe inside my head.” Perhaps. The band showcases a lot of dynamics between soft and loud moments and extra effects. On “No Likes” the band ramps up more energy with great speed and fantastic guitar chords. This is one of the band’s noisiest moments on the record, and punkiest.

Next up is “Nemesis” and it features a heftier drum/bass beat, which is very catchy. It also features a haunting backing vocal. I think this was my favorite track on the album. “Burn” offers a tighter beat between the rhythm section, and a more searing, electronic sounding guitar riff. If you listen closely on some the extra vocal track, or effect, it sounds like someone is upchucking. Ok, yes, it sounds like it for sure on the songs’ end. “Winning” begins with a piano and breathy singing. There’s also some creepy sounding breathing (?) in the background. The extra piano melody accompaniment sounded beautiful. Overall, this track stood out the most to me. “Finding Out You Mean Nothing” features a great guitar chord melody that has a certain Halloween vibe to it. Z’s last song, “Machine Learning” was I think, the band’s happiest sounding tune. The words “Have fun, have fun” sound pretty happy to me anyway.

Musically, the rumbling floor toms, the catchy, light guitar chord riffs and bouncing rhythms all contributed to this happier sound. But, the band does mix in raw, distorted guitar parts, too – which made the song more interesting and fun to listen to. All in all, Z’s, Calamity, was probably the shortest album I’ve every reviewed – clocking in at just barely over 24 minutes long. I think that may even rival the short length of some Ramones’ albums. If you’re looking for something different to listen to, try this one.