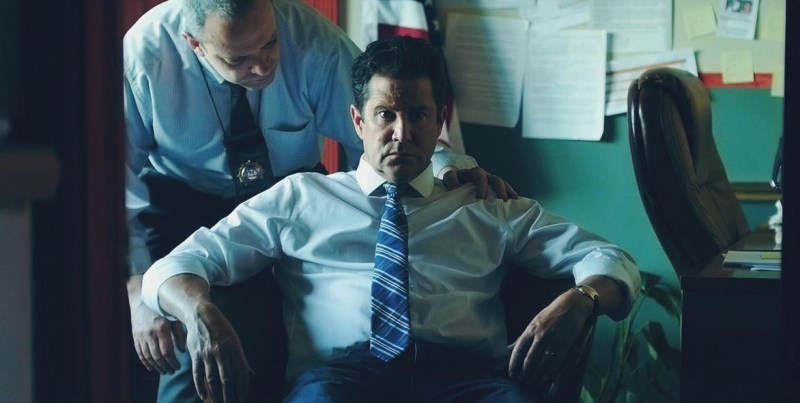 When We Dance the Music Dies

Anyone who came of age as a devoted fan of horror films in the 1980’s remembers William Ragsdale. His turn as the young Charley Brewster alongside movie and television legend Roddy McDowall in the feature Fright Night still stands as a first rate performance in one of the genre’s still underrated gems. Ragsdale, older now than McDowall when making the aforementioned film, headlines a strong cast in Anthony de Lioncourt’s feature film When We Dance the Music Dies. The third full length film from this award nominated director boasts his most impressive cast yet and a script tackling a familiar genre for the filmmaker – the psychological thriller – and promises to be the pinnacle of his cinematic work thus far. His visual and storytelling talents are a big reason why, but there’s more.

The script draws its inspiration from the true story of Elisa Lam’s mysterious and premature death. In 2013, Los Angeles police discovered Lam’s body in a water tower atop the Cecil Hotel and, investigating further, discovered surveillance footage of Lam in a hotel elevator on the night of her disappearance. The footage shows Lam in a disoriented state pressing elevator buttons in a random fashion, stepping out of the elevator and back on again, before leaving the elevator a final time. Detectives later determined Lam and other acquaintances participated in what many call “The Elevator Game”. The “game” springs from an urban myth in Asia and South Korea that says if you can enter another dimension if you press an elevator’s buttons in the correct order and step out on the right floor.

It provides ample source material for de Lioncourt’s film. Ragsdale plays Tom Walton, distraught father of his missing college age daughter Audrey, and the plot portrays his attempts to uncover the truth about what happened. His quest leads him to Clayton Riggs, played by noted actor and one time Oscar nominee Eric Roberts, the leader of a cult who believes they hail from an alternate dimension and can return there thanks to his leadership. Catherine Mary Stewart joins Ragsdale and Roberts playing the role of Watson’s wife Helen and the two depict the desperation of grieving parents with the conviction such parts demand. Roberts conveys the same unsettling and understated menace he has brought to a variety of roles throughout his long career and is well cast in his role as the cult leader Riggs. The film has a muted color scheme throughout much of its running time; brighter colors, when they emerge, capture the eye with their striking contrast.

The film’s atmosphere balances between this moody composition and the striking visual imagery that defines de Lioncourt’s films. His feel for atmospherics is never overwrought and the strong performances driving the film help make this a credible foray into a time-tested genre. When We Dance the Music Dies operates on an indie budget, but financial considerations prove to be no obstacle. de Lioncourt’s fulfills his ambition to produce a gripping thriller flush with credible characters and an intelligent script. Anyone who calls themselves a fan of this style will enjoy this often unnerving ride into the unknown.