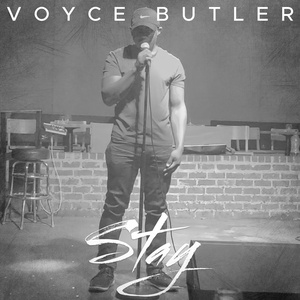 Quiet but not without a quaking presence that swells with Voyce Butler’s every utterance, the tonal elements comprising the foundation of “Stay” are definitely on the subtler side, but they’re going to influence the way you interpret the meaning of this all-new single without debate. Whether you’re new to Butler’s sound or have been following his steady ascent through the indie hierarchy recently, “Stay” is constructed to make you feel as though you’re a most welcome guest in a house built on the back of soul, R&B, and the lustiest side of pop balladry.

Things move a little slower in this song than the status quo calls for, but it’s not because our leading man is struggling to assemble his narrative – actually, quite the contrary. He wants us to feel every bit of passion he’s emitting from behind the microphone here, and while he recorded this track in the studio, there’s an emotional output coming through the speakers unbound by any four walls on this planet. You can’t rehearse the kind of skill this artist is making his name on, but, you can absolutely get swept away by the way it’s used in this incredible R&B slow jam.

The vocal is sizzling hot from the jump, straddling the bassline to make a big groove out of what would otherwise be considered a minimalistic beat in the background. The conservative stylization of the master mix, while being outside the norm of what a lot of indie producers probably would have gone with in this scenario, was very necessary to give us as focused a look at Butler’s ability as possible. There’s just no need to get virtuosic behind the board when you’ve got the pipes this young man has, and though he’s limited by the acoustics of the booth, he sounds like he could take on almost any size of venue if given the opportunity. Mixing his attitude in with the raw grit of his lyrics only verifies his unwillingness to hold anything back from us in “Stay,” and from where I’m sitting that makes him a member of a rather elite class in pop singers today.

If this is just a preview of what we’re going to be hearing from Mr. Voyce Butler as his campaign moves into 2021, I don’t doubt he’s going to make the segue from the underground to the mainstream market a lot sooner than later. The studio vibes he has in this performance are as strong as they come, and even without a synthetic boost he sounds like a man who can manage a melody regardless of how tricky it might be. If he can bring this same presence to the stage as live music returns to regular life once more, he’s going to likely cultivate a momentum that will be awfully hard for the competition to slow down, and provided he keeps producing material as emotionally potent as “Stay” is, there should be no reason he doesn’t break the primetime with his natural, God-given gifts.

The music of Voyce Butler has been heard all over the world in partnership with the radio plugging services offered by Musik and Film Radio Promotions Division.  Learn more https://musikandfilm.com