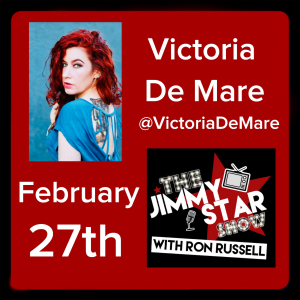 Victoria De Mare will be a featured guest on The Jimmy Star Show live radio/tv show hosted by King of Cool Jimmy Star along with Cool Man About Town Ron Russell to discuss her music, her career and the entertainment industries at large. The Jimmy Star Show is tv/radio’s coolest hit show, featuring the best in music, entertainment, fashion and pop culture, all from a fun industry insider perspective in a completely live, unedited fast-paced two-hour conversational format.

Victoria De Mare is one of Hollywood’s reigning “Hottest Horror Scream Queens” for over a decade according to the cover feature editorial article of the January 2017 issue of Hustler Magazine. She has appeared in over 120 Film & TV productions & counting. She is best known for her creation & portrayal of the sexy demon succubus clown, “Batty Boop” from the horror/comedy feature series, ‘Killjoy’, which is now available as a resin doll statue/action figure courtesy of Full Moon Collectibles worldwide November 2017.

Victoria is a graduate of New York University with a B.A. in Theatre Arts and Broadcast Journalism. In addition to being a prolific character actor, she is also a published writer, published poet, professional model, live talk show host & producer, as well as a professional dancer. She is a former member of the Hart Pulse Dance Company, Wilmington Ballet Company, & Joffrey Ballet Company with guest artist performances at the St. Croix Ballet Company in the Virgin Islands.

Victoria is also a special guest DJ/Host on RockRageRadio.com, which is the largest online radio station worldwide in 18 countries. Her popular show “Groove Time with Victoria De Mare” aired Friday nights 6p-8pE/5p-7pC/3p-5pP to over a million weekly listeners from 1/26/18-9/28/18.

The Jimmy Star Show with Ron Russell is pleased to showcase the expertise and talent of Victoria De Mare and all anticipate a fun and informative time talking with her about her career and the entertainment industries at large.

To hear/see Victoria De Mare live on the Jimmy Star Show with Ron Russell tune in to W4CY radio on Wednesday February 27th, 2019 from 3-5 pm ET and 12-2 pm PT online at www.w4cy.com from anywhere in the world!