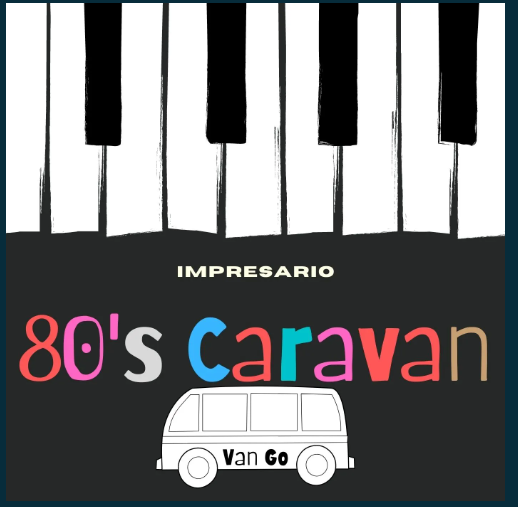 Opera singer Valerian Ruminski’s alter ego Impresario has provided the gifted vocalist with an alternate creative path away from his work as an opera singer and continues paying off for both Ruminski and his listeners with the latest release 80’s Caravan. The nine-track release is Impresario’s fourth release since March 2020 and this astonishing burst of creativity shows no signs of slowing down. The original songs included on 80’s Caravan are timely, without question but, nevertheless, embrace sounds that have been consigned to irrelevance. Impresario, thankfully, didn’t get the memo.

There’s a wise message underpinning the opening track “When I Asked the World for Love”. Impresario’s lyrics for the track illustrate his reflective nature, but this isn’t the sort of human being who sits around all day taking their own temperature. The song’s prescription for the particular malady explored in its words, a misplaced need for validation, is forging your own path and bringing the world along for the ride. Framing it within such a winning pop setting, never lacking for musical substance, is a masterstroke.

Impresario’s impressive vocal stride continues during the title track. It pairs well with the song’s lively electric piano and its energy throws off sparks from practically the first note. There are several interesting rhythmic shifts during the course of the track, never pronounced, but nonetheless enough to give the song an added push towards the finish line. “Hot, Hot World” keeps things going in the synthesizer and pre-programmed instrumental vein with live vocals mixed into the stew. Ruminski’s voice benefits from the presence of female backing singers throughout 80’s Caravan and this song is no exception.

“Here We Go Again” is another track aspiring to social relevancy and succeeds in making a statement about the moment. Doing so without ever being heavy-handed is especially notable. It likewise highlights another vibrant pairing of pre-programmed percussion, synths, and electric piano and proves to be equally effective. Impresario has a much rockier edge with the track “King of the Juice” and it has a theatrical streak lacking in earlier cuts. The presence of guitar in the song is much greater than any other and sharpens its bite despite its synthesized sound.

“Over and Over Again” is another triumph combining an universal quality with personal touches that are impossible to ignore. Ruminski is clearly invested in each word. The striding mid-tempo pace has several nice changes and piano drops in a number of brief melodic runs. There’s a rap section near the song’s conclusion that may divide listeners, but even the song’s harshest critics will struggle to find fault.

Pedal steel makes an improbable appearance during the album’s final “I Wanted to Love You” and it’s equally a pleasure hearing Impresario forego much of the electronic instrumentation powering its predecessors. The closer, instead, relies on a rather spartan arrangement keyed around the piano and the aforementioned pedal steel. It’s a surprisingly valedictory way to end Impresario’s 80’s Caravan but underlines the diversity of his art. It works, however, and leaves the album surrounded by a warm glow.