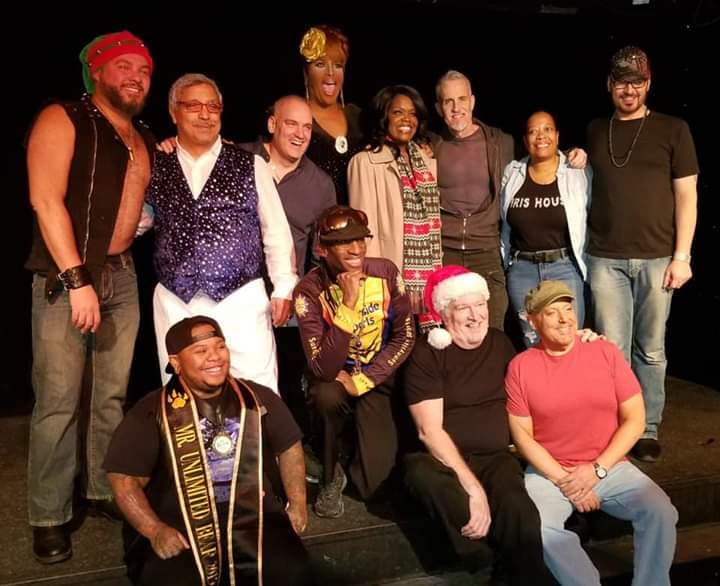 Christmas season in New York City has a magic all its own, unlike Yuletide in any other major metropolis. The Big Apple tends to find its gritty, hard edges softening during this brief interlude between autumn and the deep freeze of January. There are reminders of the season everywhere you look–from Saks’ amazing holiday light show, ten stories tall, to completely off-the-wall events like the annual SantaCon pub crawl–and the recent Toys For Iris 2 benefit show produced by veteran actor and gay bear legend Joe Mannetti on behalf of Iris House, whose lifesaving mission focuses on women, families, and “underserved populations” living with HIV/AIDS in cities across the country. The delightful variety show, which featured acts that ran from endearing to ribald, was held on November 30 at Industry Bar, which won a GLAM Award as Best Gay Bar, in the heart of Manhattan’s famous Theater District. “It’s so important for me to be doing this work,” Mannetti, who produced and hosted the show, tells The Hollywood Digest. “I’m so happy to continue helping Iris House this year.”

Mannetti, over whose long career in activism, adult film, and fundraising, most recently included another Iris House benefit with fellow “Care Bear” Jed Ryan entitled Baskets For Iris, is passionate about doing the work in the community: “I had the privilege and pleasure of raising over $1,000, plus all the toys, that brought the total to over $2,000. I’ll be joining Iris House on December 19 at their annual holiday event, where I’ll volunteer.”

Mannetti’s diligence was clearly apparent during the Toys For Iris 2 show, which featured a diverse lineup of great talent from all over the city. Vocalist, media personality, and film star Tym Moss performed Have Yourself A Merry Little Christmas and other holiday classics just as sonorously as Ol’ Blue Eyes himself would have done it. Out, proud comedian Ike Avelli performed risque but hilarious snippets from his enormously popular Fifty Shades Of Gay Christmas show, and drag divas galore brought their best kitsch to the spotlight. Among them were divas Jacqueline Dupree, and larger-than-life Ari Kiki, whose boundless energy just electrified the audience. “It’s just magical to be here with all these wonderful people,” Tym Moss reflected, and there is something enchanting about entertainers assembling for a good cause.

Beyond the campy drag acts and the comedic repartee, there were also some genuinely enthralling moments in song and sweetness, through the talents of Glenn Soukesian (formerly known as Cotton Ford) and Antoinette Roberson (performing courtesy of Barbara Sobel), who did a Broadway-quality medley, invigorating selections from Nelson Gonzalez, Gary Hill’s soulful melodies, and the Legendary Amaz’n Grace rounding things out. Everybody comes to NYC over Christmas to see the Radio City Rockettes, the window displays of Macy’s, or the giant tree at Rockefeller Center. The true joy of holiday time in New York, however, is at shows like this one, which carry on the spirit of giving and joy, while treating everyone to a thoroughly enjoyable evening. That’s how Christmas is done in the Big Apple.