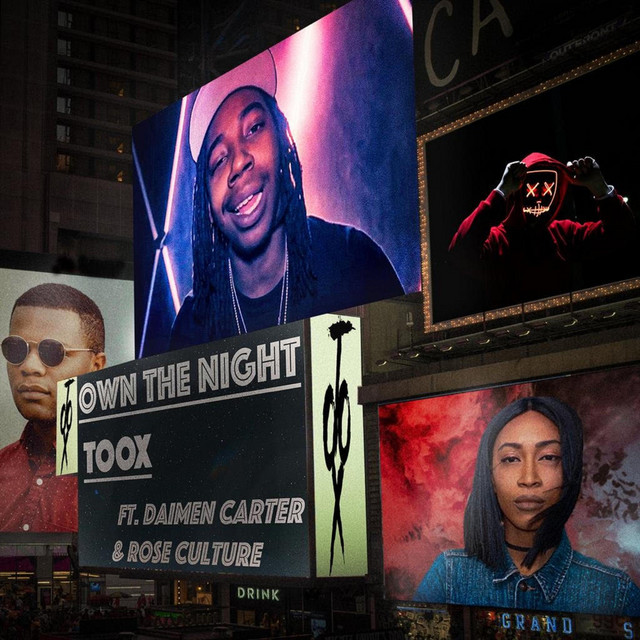 Produced by the trio of Chey de Los, Michael DeBarge, and Juicegotkeys, newcomer Toox teams with talented vocalists Daimen Carter and Rose Culture for the new single “Own the Night”. Both Culture and Daimen Carter have experienced regional success with recent releases “Awesome” and “Chasin’” respectively, but this new single poises them to break out into the national consciousness alongside Toox. DeBarge supervised the song’s recording at New York City’s The Music Building, but the songwriting is a collaborative effort between the three artists.

One thing that will immediately strike listeners is the unquestionable level of polish DeBarge and his team brings to the performance. Their attention to sonic detail helps frame the songwriting vision with maximum style yet never sacrifices musical substance to garner listener’s attention. There is no pandering to the lowest common denominator with this recording. Instead, the sound of “Own the Night” engages listeners physically from the outset yet has a well-rounded pleasing aural veneer certain to hold the listener’s attention from beginning to end.

There is a pleasing mix of both hip hop and neo-soul running throughout the performance. Rose Culture, prior to this track, has made a name for herself as a rapper, but the single proves she is an adroit singer with ample feeling and chops she can bring to bear at any given moment. Her voice provides an excellent counterpoint to Toox and Daimen Carter’s contributions. It likewise complements the synth driven backing and strong melodic structure. Her voice syncs up particularly well with Carter’s own and they create seamless accompaniment for Toox’s vocal delivery.

He locks into the song’s inherent rhythmic potential and dispatches the lyric with equal parts musicality and charisma. Much of the track highlights his voice alone as the instrumentation takes a backseat but he is more than capable of carrying the cut on his back and sounds comfortable throughout. The lyrics are edgy though never profane. You can listen to Toox and hear the slight undercurrent of a smirk alongside the obvious swagger, but he treats the track with the seriousness it deserves.

The performance clocks in at just three minutes fourteen seconds, but few listeners, especially hip hop fans, will come away feeling cheated by its relative brevity. “Own the Night” isn’t a song meant to linger and the artists and production team involved in its creation obviously eschew any sort of self-indulgence. This is a thoroughly professional production from top to bottom and the parties involved gear it towards a modern audience; there’s no nod to retro sounds in “Own the Night”.

It isn’t difficult to imagine this track finding favor in nightclubs, not just radio, as it has a clearly defined sound geared towards reaching the widest possible audience. Toox, Rose Culture, and Daimen Carter have scored an impressive accomplishment with “Own the Night” – it has ample commercial appeal, but this is a track with genuine musical weight as well and heralds the continued arrival of a major talent with Toox. It’s one of the genre’s best singles yet in 2020.