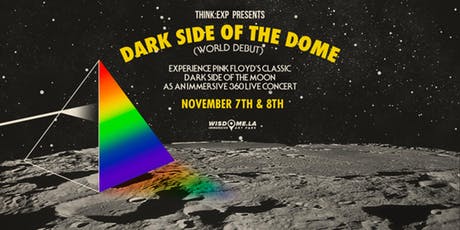 THINK:EXP Presents “Dark Side Of The Dome” November 7th & 8th At The Wisdome LA

Journey into the magical realms of virtual reality, iconic musical art and 3-D sound for the mind-bending debut of Think:EXP’s new live immersive concert, Dark Side of The Dome.

Dark Side of the Dome is performed by an all-star band featuring members of Pink Floyd, Jane’s Addiction, The Hendrix Experience, and Fishbone at the exciting Wisdome.LA Immersive Art Park in DTLA Arts District.

The new show is the follow up to Think:EXP’s critically-acclaimed, sold out show Beyond The Wall which was a 6 month smash hit!

Don’t hesitate… reserve your seats now. This show will sell out!!

This All New Show Features

Dark Side of the Dome recreates the classic album “Dark Side of the Moon” from Pink Floyd, while utilizing state of the art technology including; stunning customized 360 visuals, lasers, 3D audio, and live painters and performers. The show also features the incredible artwork of Android Jones (Grateful Dead, Tipper).

“Wisdome’s immersive art in Los Angeles may be just what you are looking for.” – Forbes

Get your tickets on EventBrite Today: