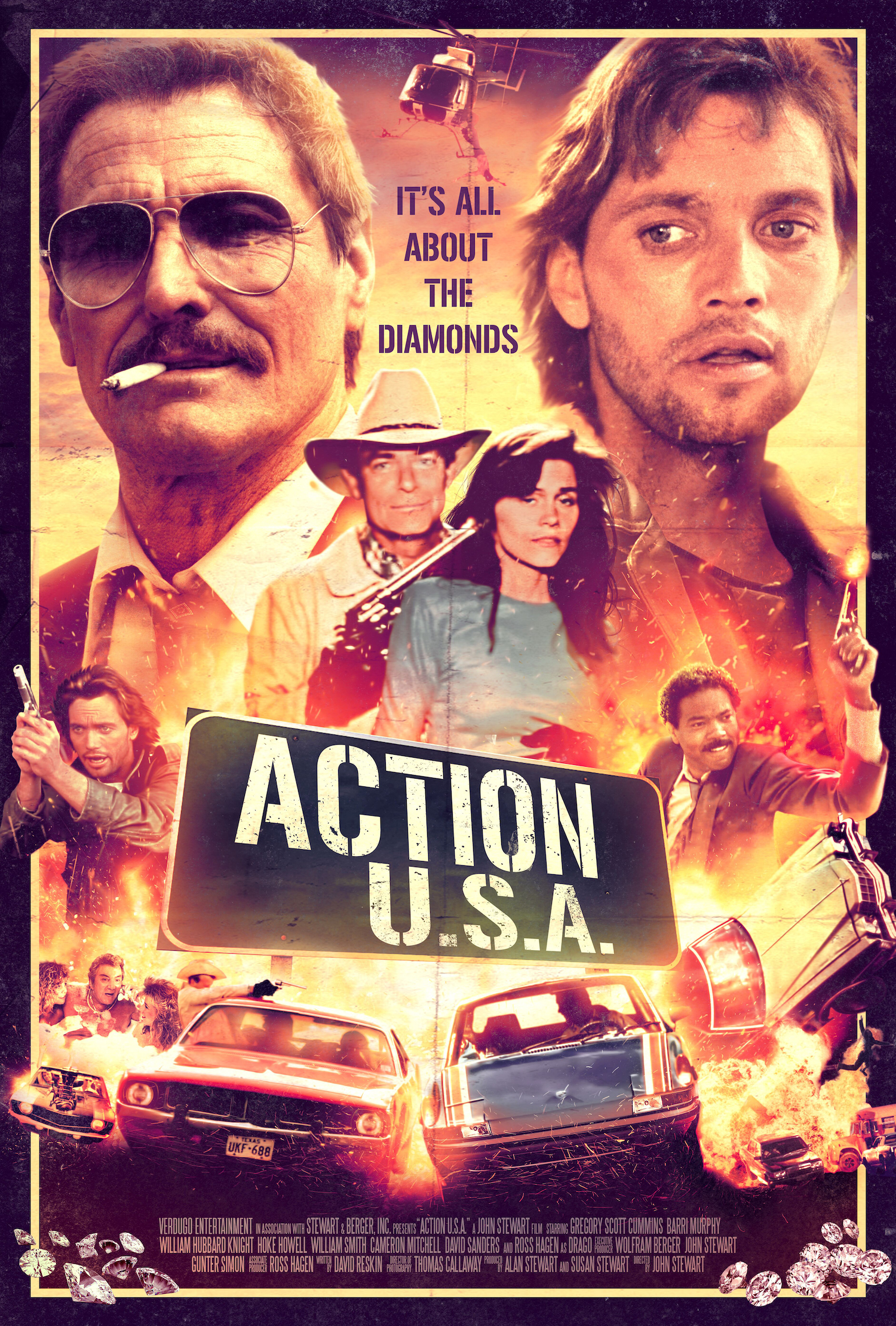 THE YEAR’S MOST DEATH-DEFYING, MAYHEM-CELEBRATING FILM “ACTION USA” EXPLODES EXCLUSIVELY ON ALAMO ON DEMAND…Stunt-filled spectacle is the latest rediscovered gem from the Fantastic Fest programming team

Following in the tradition of rediscovered cult classics MIAMI CONNECTION, ROAR, and DIAL CODE SANTA CLAUS, last evening’s Secret Screening during the “Celebration of Fantastic Fest” was revealed to be ACTION USA, a massively entertaining stunt-filled lost gem from 1988. And now, Alamo Drafthouse Cinema is excited to announce that ACTION USA has launched exclusively on the company’s Alamo On Demand VOD platform, available for a virtual cinema engagement through October 11.  The film will have its theatrical premiere in cinemas across the nation starting November 6th.

A stuntman-turned-filmmaker named John Stewart unleashed ACTION USA back in 1988, the most explosive, death-defying, bullet-riddled, grenade-launching, flame-broiled, anti-human megattack… and no one knew, until now. Verdugo Entertainment, a newly formed company that specializes in high end restoration and specialized distribution is thrilled to have found this lost treasure and to re-issue the film in partnership with Alamo Drafthouse and Giant Pictures.

“I was so shocked to get a phone call out of the blue from Tim League at Alamo Drafthouse that initially I thought it was a prank,” says John Stewart, director of ACTION USA.  “I’ve always been so proud of the work we did on this film and I’m beyond excited to finally see it reach a wider audience after over 30 years.”

“When you think of the broad panorama of VHS-era action, your mind detonates with fast cars, helicopter chases, profanity, nudity, cocaine-ity, fisticuffs, stolen diamonds, FBI agents, defenestration, shotgun castration, men on fire and Casio soundtracks. But what if we told you there’s one single movie that impossibly squeezes all of the above into 89 minutes, not to mention sunroof gunfights, a car jumping over a school bus packed with screaming children, honkytonk brawlin’, bathroom kissin’, plus exploding cars, houses AND recreational vehicles?” said Fantastic Fest programmer Zack Carlson.

In the late 80s, against all known laws of reality, daredevil-turned-filmmaker John Stewart took to the cities, highways and saloons of Texas and accomplished that very feat. Having cut his teeth handling stunt work for NEON MANIACS, FERRIS BUELLER’S DAY OFF and HARD ROCK ZOMBIES, Stewart’s directorial debut, funded by members of his stunt community, tears out of the gates with a ferocity never seen before or since in the independent action pantheon. Under-appreciated character actor Gregory Scott Cummins plays a reluctantly heroic FBI agent tasked with keeping a witness (Barri Murphy) safe after the mob murders her boyfriend (Rod Shaft). But the route back to federal headquarters is a non-stop barrage of bullets, blasts, and bodies, constantly raising the bar of inhuman wildness until the film’s final second. The mayhem is further enriched by supporting performances from William Smith (MANIAC COP), Cameron Mitchell (RAW FORCE), and Ross Hagen (BLOOD GAMES), a who’s-who of B-movie demigods.

ACTION USA takes the grand tradition of self-made two-fisted epics like MIAMI CONNECTION, HARD TICKET TO HAWAII and SAMURAI COP and turns the knob past 11, then snaps it off and jams it in your eye socket.

Alamo Drafthouse Cinema was founded in 1997 as a single-screen mom and pop repertory theater in Austin, TX. Twenty-three years later, with 41 locations and counting, Alamo Drafthouse has been called “the best theater in America” by Entertainment Weekly and “the best theater in the world” by Wired. Alamo Drafthouse has built a reputation as a movie lover’s oasis not only by combining food and drink service with the movie-going experience, but also introducing unique programming and high-profile, star-studded special events. Alamo Drafthouse created Fantastic Fest, a world-renowned film festival dubbed “The Geek Telluride” by Variety. Fantastic Fest showcases eight days of genre cinema from independents, international filmmakers, and major Hollywood studios. Alamo Drafthouse’s collectible art gallery, Mondo, offers breathtaking, original products featuring designs from world-famous artists based on licenses for popular TV and movie properties including Star Wars, Star Trek & Universal Monsters. Alamo Drafthouse continues to expand its brand in new and exciting ways, including the American Genre Film Archive, a non-profit film archive dedicated to preserving, restoring and sharing film, and Alamo On Demand, a new VOD platform boasting a growing and carefully curated library of entertainment for rental or purchase.

Verdugo Entertainment is a Los Angeles based film distribution company that specializes in classic film and TV shows that benefit from high-end restoration and specialized distribution using marketing skills developed specifically for vintage content aimed at a targeted demographic.