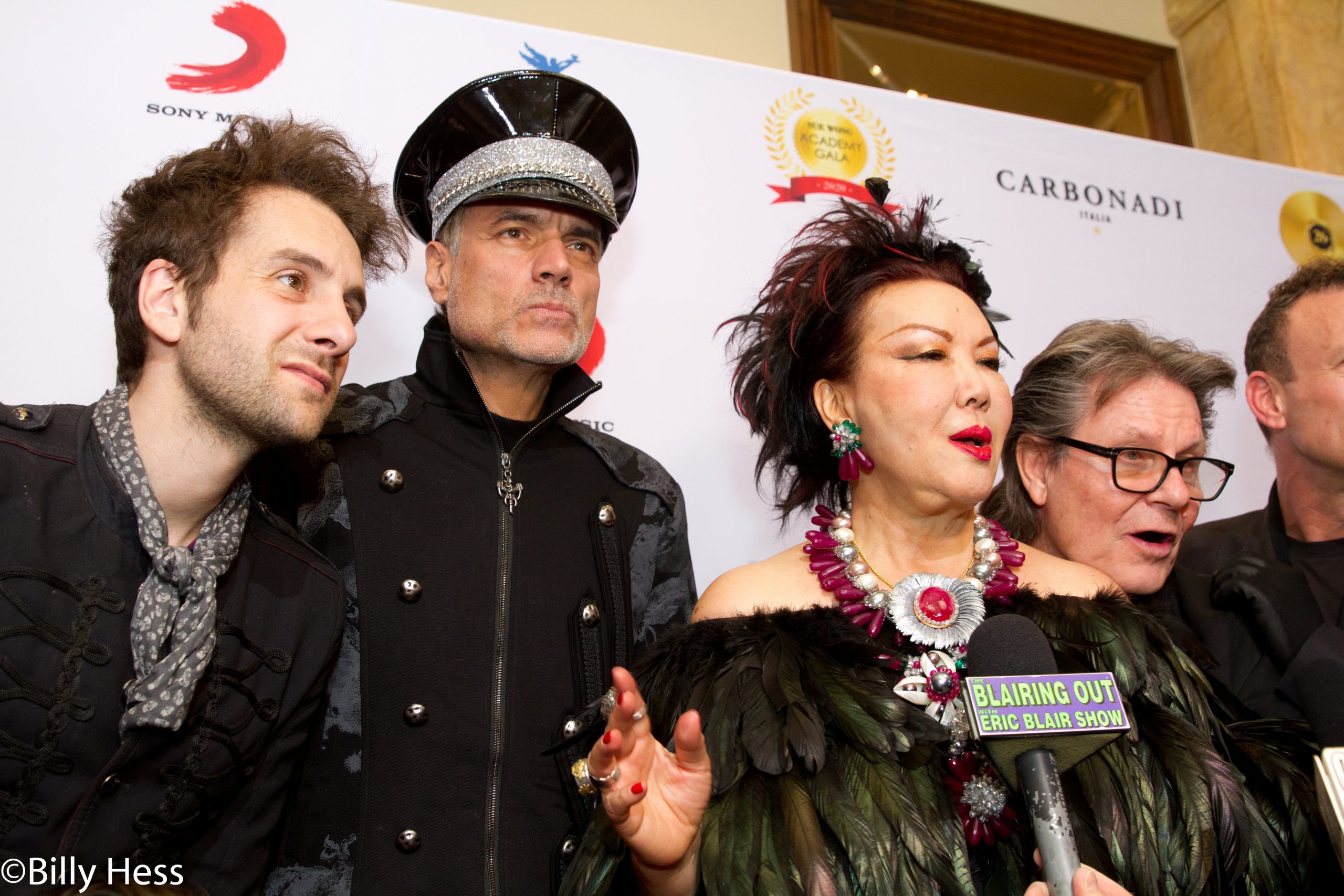 The pale, pastel pink hotel room surrounded itself with the aroma of Melrose Ave, and the fragrance of Angel accented by an array of illuminated fuchsia and black dazzling sequined apparel sprawled all over  the beds, the bathroom and the floor. All of this in preparation for international fashion designer Sue Wong’s Academy Gala on Hollywood’s brightest eve of the year, Oscar night. Clearly the two queens, my hotel-mates celebrity photographer Billy Hess, and hair designer to the stars Mark DeAlwis captured the room with their outrageous costume choices, a bottle of Jack, and some charcoal-black guy-liner while I feverishly tried to beat Mark to the shower.

Some of the biggest and most respected rock stars on the planet followed on the carpet in the form of supergroup Think:EXP. The revolutionary immersive band includes founder Scott Page,  Pink Floyd’s, Supertramp’s and Toto’s saxophonist, drummer Stephen Perkins from Jane’s Addiction, legendary guitarist Kenny Olson from the Twisted Brown Trucker band,  and touring Hendrix Experience, Tony Franklin from The Firm and Whitesnake, Will Champlin from The Voice and One Direction producer, and Derek Day, emerging recording artist.

An opulent entrance was made by Designer Sue Wong wearing a decadent shoulder- less, black, feathered gown accented with bold jewelry and an air of empowerment. Born in China Sue Wong is a self-made fashion supreme recognized for her contemporary designs based with a twist of old Hollywood glamour. Her ensembles are available in over 27 countries. Residing at “The Cedars”, a historic rock n’ roll hilltop Villa in Los Feliz, with former habitants including Jim Morrison and Jimi Hendrix, Wong is also an author and screen writer and an inspiration to women everywhere.

The Sue Wong Academy Gala was her first annual Living Canvas of Oscar Night event uniting East and West fashion. The viewing of the Oscars was celebrated through the spirit of art, philanthropy and spirituality. “Celebrities With a Purpose”, produced via Freya Pruitt, Amanda Pool, Michelle Ortiz, Sue Wong and the after party by Scott Page, was assembled to raise money for Project Angel, a nonprofit that delivers nutritious meals each year to those affected by life-threatening illnesses.

One of the highlights of the red carpet celebration was the disbursement of the “Transformational Art Award” for “Music With A Purpose” eloquently presented by the confident, unabashed, recording artist and entertainment promoter SohoJohnny with  Sue Wong at his side. Honorees were Scott Page, Stephen Perkins, Kenny Olson, Norwood Fisher, and David Moss, in conjunction with their work supporting The Watts Conservatory of Music to be constructed for adults and children of the Watts community. The Watts Conservatory of Music’s goal is to provide a place where children and adults  of all backgrounds can learn to play a musical instrument in a safe and positive environment, free of charge.

The evening was unleashed with a bombastic display of elegance, beauty and a distinctive creative sensibility as Sue Wong presented her fashions in a musical avalanche of kaleidoscopic rhapsody.  The alluring and bewitching designs dazzled the congregation as the shining models gracefully displayed Wong’s delicate and salacious adornments. This was followed by a tsunami of entertainment including 13 Shaolin Monks, 13 women drummers, Kalliope, Awards, and others.

Most were pleased to learn that Joaquin Phoenix was no joke. On three huge monitors we watched the Oscars unfold and listened to Joaquin’s sensitive speech as well as Renée Zellweger’s. Parasite won Best Movie, ……and then the party ultimately began to rock!

The guests were dancing in the aisles, and swinging from the rafters in an effervescent performance by Think:EXP. They never fail to be astounding! More talent was let loose at the afterparty including superstar Shelita and then 26 Record signed artists including British born Bex Marshall. The house rocked….great job Scott Page….

When the smoke finally cleared and the after after after parties were over, Billy Hess and Mark DeAlwis coaxed their Asian Uber driver to a McDonald’s where they ordered $40 worth of hamburgers. The driver looked at Mark in dismay and called him a “FAT LADY”, A perfect ending to a perfect evening!