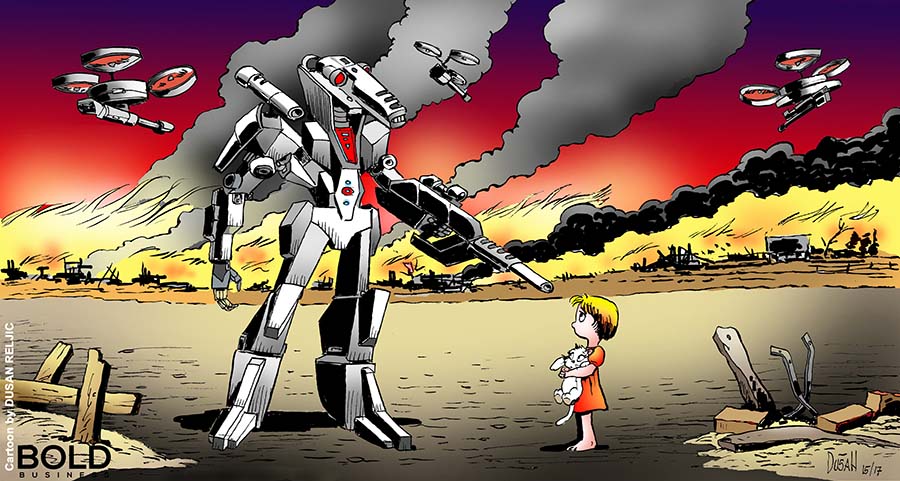 The Return of the Killer Robots by Howard Bloom

A move made by the San Francisco Board of supervisors has brought the subject of killer robots to the fore.  And critics have demanded that robots able to kill be taken off the board before they kill masses of innocent human beings.

But there’s a problem.  Once a weapon is invented, it’s used.

872 years ago,[i] the Pope saw a new weapon on the horizon and was certain it would allow mere peasants to annihilate armored aristocrats on horseback.  So he banned its use against Christians.  It was the crossbow.[ii]  And, despite the ban, it was in use for the next 400 years, well into the life of the gun.

The lesson? If we don’t use a new weapon and test its flaws and opportunities, our enemies will.  And those enemies will force us to use that weapon in defense.

The potential of killer robots in America is not new.  In 2008, the Dallas Police Department acquired its first $280,000 Northrop Grumman Remotec Andros Mark 5-A1. The Andros is a robot designed to defuse bombs by remote control while servicemen stay out of harm’s way.  By 2016, there were a thousand Andros robots in the hands of American police departments.

Then a critical incident happened. At nine AM in the morning of July 7th, 2016, a 25-year-old Afghan war veteran carrying a Saiga AK-74 Assault Rifle and wearing an armored vest went to the fringes of a protest against the police killing of two black men.  He found a hidden sniper position, killed five police officers, and wounded seven more police plus two civilians.

When the police found his location and came after him, the shooter, Micah Johnson, killed two more officers and holed up behind a pillar at the end of an office corridor on the second floor of an El Centro College building, swearing that he intended to kill more white people, preferably police officers.

The police tried to talk Johnson down until 2:30 in the morning.  But Johnson only got more belligerent and more insistent on killing.  He claimed to have planted bombs all over the city. He urged a black policeman to kill the white officers around him.  And he periodically bolted from his position and charged the negotiators.  If Johnson escaped with his weapon, more people would die.  So finally, the police gave up on gentle persuasion and improvised.

They strapped a pound of C-4 explosives to an Andros bomb disposal robot’s arm, sent it to the wall opposite Johnson, and killed this active shooter before  he could commit more murders.  It was the first use of a police robot to kill in America’s history.  That was six years ago.

Now another major step toward arming robots with lethal weapons has taken place.  The San Francisco Board of Supervisors has passed a code with a crucial line requested by the police department.  It says “when risk of loss of life to members of the public or officers is imminent and officers cannot subdue the threat after using alternative force options or de-escalation tactics,” they can use robots or drones to kill.   The initiative isn’t final.  It still has to go through another review by the Board of Supervisors and approval by the mayor.

But equipping bomb defusing robots to shoot is something being toyed with by the city across the bay from San Francisco, Oakland.  The Oakland police have something that looks like a gun on their Andros robots.  It’s called a “percussion actuated nonelectric disruptor.”  The disruptor can shoot high pressure water or blank shotgun shells to stop a riot.

The Oakland police swear they’ve never tried inserting live shotgun shells into the disruptor, but that possibility is under discussion.  After all, if an Andros robot capable of shooting had been used in Uvalde, Texas, it could have saved children’s lives.

Turning robots like the Andros into killing machines is controversial. To say the least.

The prestige news website the Intercept warns of “mission creep.”  It explains that, “The recent past is littered with instances of technologies originally intended for warfare mustered instead against, say, constitutionally protected speech, as happened frequently during the George Floyd protests.”

Adds Tifanei Moyer, a senior staff attorney for the Lawyers’ Committee for Civil Rights of San Francisco, the killer robot is  “an awful idea, These guys are taking policy decisions from the Terminator.’”  I’m not sure I agree.

Howard Bloom has been called the Einstein, Newton, and Freud of the 21st century by Britain’s Channel 4 TV.  One of his seven books–Global Brain—was the subject of a symposium thrown by the Office of the Secretary of Defense including representatives from the State Department, the Energy Department, DARPA, IBM, and MIT.  His work has been published in The Washington Post, The Wall Street Journal, Wired, Psychology Today, and the Scientific American.  He does news commentary at 1:06 am et every Wednesday night on 545 radio stations on Coast to Coast AM.  For more, see http://howardbloom.institute.