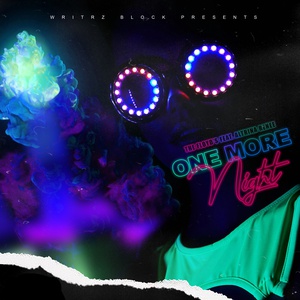 The Floyds and New Jersey based Altrina Renee bring their considerable talents together for a new single entitled “One More Night”, but you can’t say they recorded it in a business as usual fashion. The track came together at The Writrz Block studio where they invite artists of any genre to come in and record a song within three hours. The Floyds and Renee met the challenge head on and the results are more than satisfying. Working with a preselected backing track, “One More Night” emerges from their musical imagination as an entertaining hybrid of hip-hop and soul. The hip-hop influence on the track is apparent from the first line while the soul sound comes from Altrina Renee’s singing and the general spirit pervading the performance. It is set up in such an ideal way; its three-minute running time positions it out of the chute for possible radio play and the track, thanks to its subject matter if nothing else, should enjoy mass appeal.

That mass appeal will be based on two key factors. The first is the musical arrangement. It is relatively minimalist and never live in the traditional sense; the drum machine lays out a mid-tempo beat for the track and there are understated synths adding color throughout the track. It isn’t a perfunctory musical vehicle. It’s clear considerable thought was invested into striking the right balance between those aforementioned elements and they complement one another nicely. The backing track gives The Floyds and Altrina Renee an excellent platform from which they can weave vocal magic.

They do that without ever seeming to break a sweat. You can hear the obvious confidence both Speech and Altrina Renee bring to their respective performance and that assertive attitude never interferes with them capturing the spirit of the lyrical content. Renee isn’t a constant presence in the song, she only comes in for the chorus, but her impact on the performance is considerable. She conjures memories of the great soul singers that came before her without ever sounding like an imitator. There’s ample confidence during the verses, but there’s an equal amount of charisma as well. Both vocals convey the song’s message without ever coming off cheesy or ham-fisted in anyway.

The song’s message is simple. It’s a heartfelt invocation of being young and wishing the night could go on forever, the sights and sounds, the friends surrounded, the possibility of love or physical contact with others. The language is spartan and to the point. Much like its musical character, the verbal character of this track is the model of no wasted motion, and the subject matter is the kind anyone can relate to. “One More Night” is the product of unusual conditions, but never sounds anything less than natural. James Floyd, Altrina Renee, and Speech achieve more in this three minute gem than many lesser talents achieve over the course of their careers. If there’s any justice in the music world, many ears will get a chance to hear this track and share the same point of view.

The music of THE FLOYD’S has been heard all over the world in partnership with the radio plugging services offered by Musik and Film Radio Promotions Division.  Learn more https://musikandfilm.com