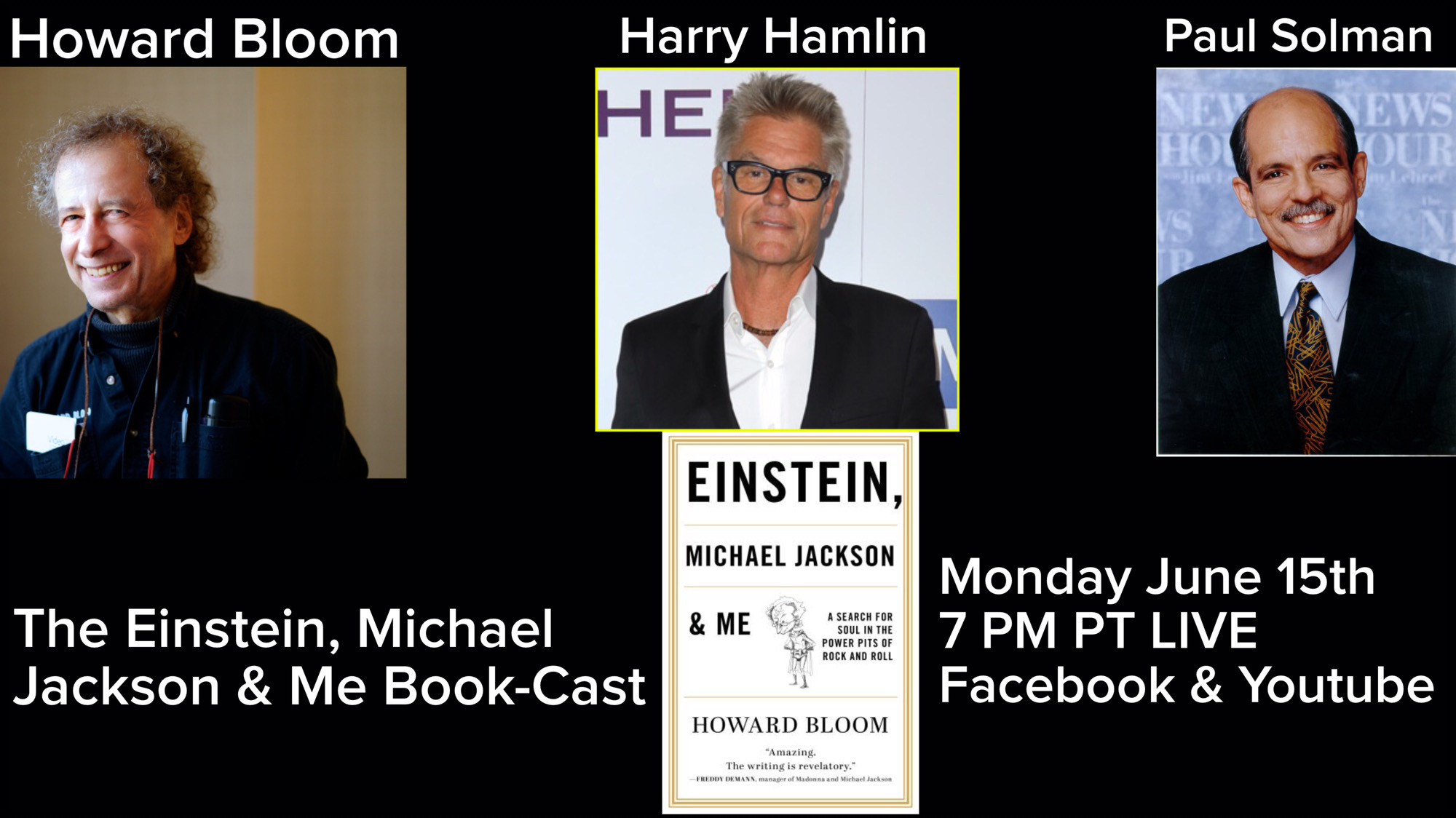 Howard Bloom has been called the Einstein, Darwin, Newton, and Freud of the 21st century by Britain’s Channel 4 TV. He’s been published or given lectures at scholarly conferences in twelve fields, from quantum physics, cosmology, and evolutionary biology, to neuroscience, information science, aerospace, and governance. But he’s also been labeled “the greatest press agent that rock and roll has ever known” by Derek Sutton, the former manager of Styx, Ten Years After, and Jethro Tull. Bloom knew nothing about popular music, but he embarked on a Voyage of the Beagle in popular culture, founded the biggest PR firm in the music industry and helped build or sustain the careers of our biggest rock-and-roll legends, including Michael Jackson, Prince, Bob Marley, Bette Midler, Billy Joel, Billy Idol, Paul Simon, Peter Gabriel, David Byrne, AC/DC, Aerosmith, Queen, Kiss, Grandmaster Flash and the Furious Five, Run DMC, ZZ Top, Joan Jett, Chaka Khan, and one hundred more. What was he after? He was on a hunt for the gods inside of you and me. “Einstein, Michael Jackson & Me” is Bloom’s story—the strange tale of a scientific expedition into the dark underbelly where new myths and movements are made.

Harry Hamlin is an American actor best known for his roles as Perseus in “Clash of the Titans” with Lawrence Olivier and Michael Kusac in the Emmy winning TV series “LA Law.”  He was voted People magazine’s “Sexiest Man Alive” in 1987 and has won roughly a dozen major acting awards. Hamlin graduated from Yale University in 1974 with degrees in Drama and Psychology and was awarded an ITT-Fulbright scholarship in acting in 1977. But he opted instead to make his feature film debut in Stanley Donen’s comedy spoof “Movie Movie” opposite George C. Scott for which he received his first Golden Globe nomination.  Hamlin is the founder of TAE Technologies, a nuclear fusion technology company.  He is the author of “Full Frontal Nudity: The Making of an Accidental Actor” (Scribner) and is on the board of governors of the National Space Society with another governor, Howard Bloom. Hamlin is the son of Chauncey Jerome Hamlin Jr. who helped design the Saturn V rocket with Dr. Wernher Von Braun. He is the grandson of Chauncey Jerome Hamlin who founded the Buffalo Museum of Science in Bloom’s hometown, Buffalo, New York.

Paul Solman has been the business, economics and occasional art correspondent for the PBS NewsHour since 1985.  Solman was founding editor of Boston’s alternative weekly The Real Paper in 1972. He became interested in business when he set out to do a story about municipal bond rates (this was 1976) and realized he was clueless. As was, he realized, the entire baby-boom generation in his wake. Here was an opportunity. But how to seize it? How about going to business school?  Having no money for tuition, Paul applied for a Nieman Fellowship at Harvard and lucked out, joining the Harvard Business School MBA class of 1977-8. He embarked on a career as a business reporter at WGBH Boston immediately thereafter.

In the 1980s, Solman joined the Harvard Business School faculty, was east coast editor of Mother Jones, joined PBS’ MacNeil/Lehrer NewsHour in 1985, and has been the NewsHour’s Economics Correspondent ever since.  Topping it all off, Solman joined the faculty at Yale. In 2016, and was a Visiting Fellow at Mansfield College, Oxford University.