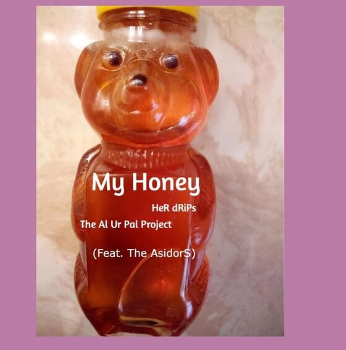 Compositional wit doesn’t start in a studio session – it begins outside, in the real world, where inspiration is always being bred on a daily basis, and when listening to the new singles “My Honey (Her Drips)” and “My Honey (His Drips),” it’s obvious that The Al Ur Pal Project isn’t getting its drive from inside of a recording booth for anything. There’s too much soul, and too much raw charisma in these performances for there to be anything less than a classically inspired model at play here, and whether you’re keen on alternative soul and indie R&B or not, this is a project and pair of singles that just might be worth taking a second look at this fall – especially given the lack of fireworks in the mainstream right now.

The charm of “My Honey” isn’t centered on its lyrical output but instead on the way the verses are framed in both versions of the song, which is not always true of any pop music (let alone something featuring such a strong vocal presence from an act like The Asidors). Al Wordlaw, the mastermind behind this project, is a Chicago guy – that much is obvious just in the way he approaches a lot of the finer points of this composition – and he was wise to go with an old-school layered look in this performance that would ultimately benefit not only his collaborators but the traditionally structured work he’s putting out here. He’s not pretending to be anything he isn’t in “My Honey,” and this alone sets him apart from his closest rivals in the mainstream and underground the same.

There are jointly two narratives coming together in the “His” and “Her” incarnations of this song, and yet it’s quite clear how serious Wordlaw is about developing some continuity with the instrumentation, particularly when you listen to the climax of either piece. He doesn’t want to make two different routes to the same peak, but instead shows us perspectives from the same road, perhaps embraced by two different souls who happen to be traveling together. The implied mood and intertwining emotions that are on the table for “My Honey” make it a much more compelling case study than what a lot of the underground has had to offer in the last few years, but if there’s one thing you won’t find in the whole of these performances, it’s even the slightest trace of ego from our leading man and his cohorts.

The Al Ur Pal Project is highlight versatility, a streamlined melodic thunder, and growing compositional abilities in “My Honey” this autumn that do not deserve to go unrecognized, and I think this is part of the reason why critics like myself have been as excited about this music since first coming across it just a month ago. Where others are sticking to the basics of crossover R&B, Al Wordlaw wants to go to the next level, and he’s making it known to anyone who cares to listen to these tracks how dedicated he is to this mission.