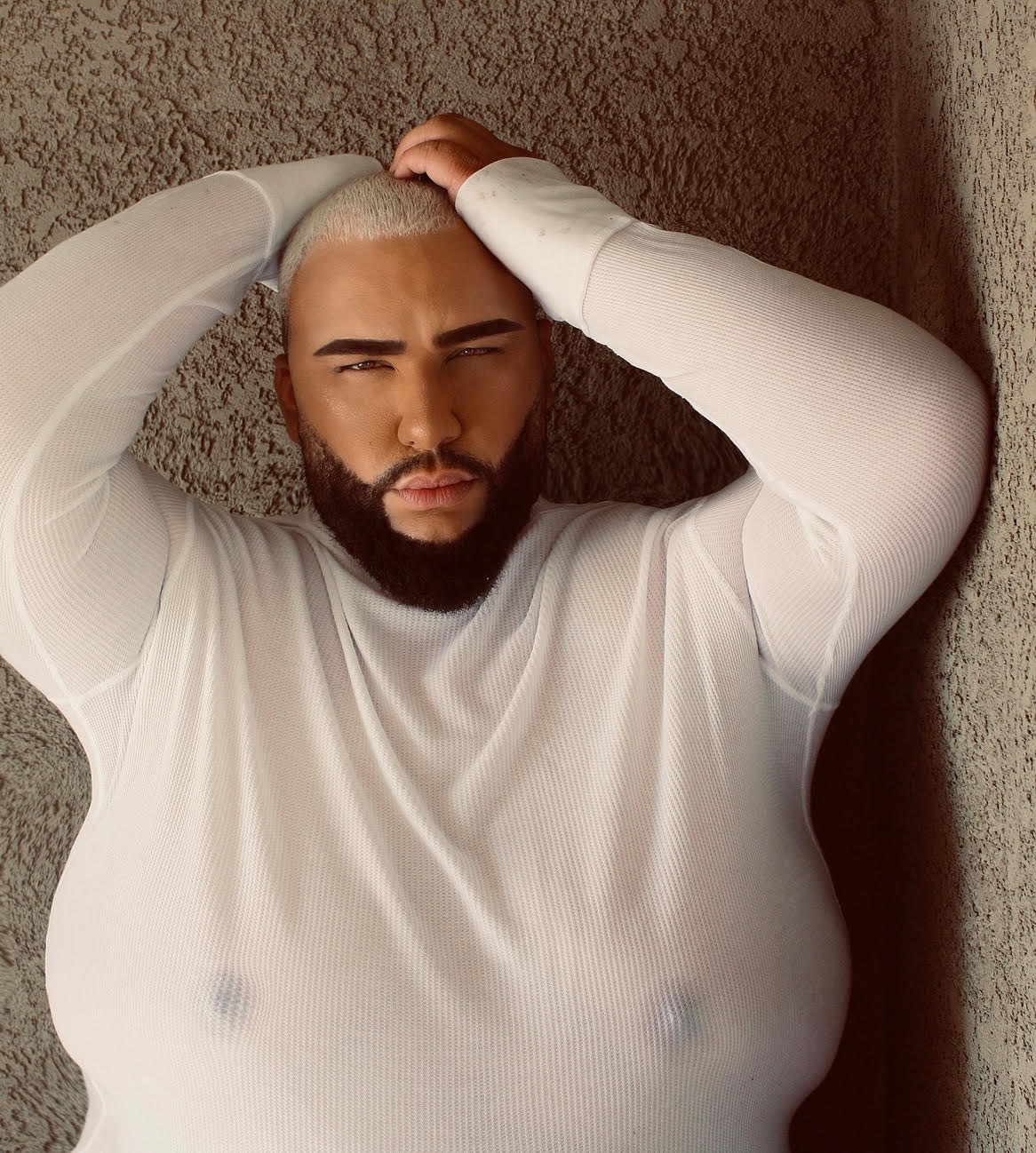 Gay men and fashion have been synonymous since the first bobbin was threaded in Manhattan’s famous Garment District to make a fabulous outfit for Father Knickerbocker.  Everything about the industry is engaged by the LGBTQ community, from Fashion Week to local boutique designers, and that surely includes the legions of models who walk the runways and populate countless lookbooks everywhere.  Until recently, however, the roster of male models almost exclusively ran towards slim or muscular men, with short shrift given to “plus-size” professionals, who often found themselves on the sidelines.  With the growing awareness of the value of plus-size salesin the fashion industry, however, models of size in both genders have begun appearing on labels’ radar screens. For one big, bold emerging catwalker, this has opened some surprising opportunities, and revealed the daunting obstacles that still remain.

That’s Ady Del Valle, a young, out, big-as-life model and fashionistawhose bold ebullience and uncommon presence is causing a stir in the halls of fashiondom.  “My friends knew I wanted to do this, “Ady says, “And they told me to go for it.”  In a community where body aesthetics are routinely judged in the harshest light possible, Ady set out to overturn more than a few apple carts.  “There are lots of gay men like me who go through body shaming because of their size,” Ady tells The Hollywood Digest.  “I want to be an encouraging influence that lets them know they do have beauty all their own.”  Ady, 31, who divides his time between Boston and New York, draws attention on red carpets, magazine covers, runways, and even in bustling Times Square, impeccably groomed and styled in a way that definitely defies—in fact, thumbs its nose at–convention.  “I am who I am,” Ady unapologetically notes, and isn’t at all shy about posing in the most revealing manner, both on social media and in real life.  His body is his own, every curve of it.  “It’s hard, sometimes, because I’ve been ridiculed, but the positives far outweigh the negatives.  As a big-and-tall man with striking attributes, including full-size breasts (more anon about that later, and how Ady has bumped into some surprising social-media algorithms) and a delightfully cherubic face, the challenges Ady faced in a thin-centric world are formidable.

Even with America’s obsession with the so-called “perfect body”, there are fashion experts who see that as an unrealistic perspective.  “I think we need plus-size models, especially men, says award-winning designer Marco Hall, who has dressed the likes of Rihanna, Erykah Badu, and Natalie Cole.  “We need to see real people wearing real clothes, not just the usual supermodels.”  That’s where Ady comes in and makes his unforgettable impression. Uninhibited, he’ s done red carpets leaving little to the imagination and posed proudly with other plus-size models in photo essays that tell an important story about body positivity. “For me,” Ady underscores, “it’s about being my own sexy self.”

It’s not all glamor and pomp, as Ady found out when he began posting shirtless pictures of himself on Instagram.  The popular social media app deleted his original account for what its algorithm apparently interpreted as “inappropriate content”.  “They took my first account down, without bothering to check who I am,” Ady notes.  As a man, topless pictures are supposed to be permissible on Instagram, whose violation notices to Ady cited “female nipples” among the kinds of photos “we remove”, but Ady is a cis male whose body has developed naturally to its present form. “I’m tired of this,” Ady wrote of a deleted picture from his backup account, “it didn’t even post one second from loading.  It was removed by IG instantly.” The model has communicated his displeasure with Instagram execs and awaits a resolution.  These frustrating barriers to self-expression highlight the issues men like Ady must negotiate while trying to pursue their art.  He has allies, however, as his growing numbers of fans attest, and the modeling gigs keep coming.  Ady is also a motivational speaker, and you can see him live on August 3 at Philadelphia Curve Weekend, where he will appear on a panel discussing plus-size body image in the fashion world.  Ady and his colleagues are stealing a march on an industry that has long relegated them to the background, but now the spotlight has shifted their way, and shine they do, as shine they must.  Everyone benefits.