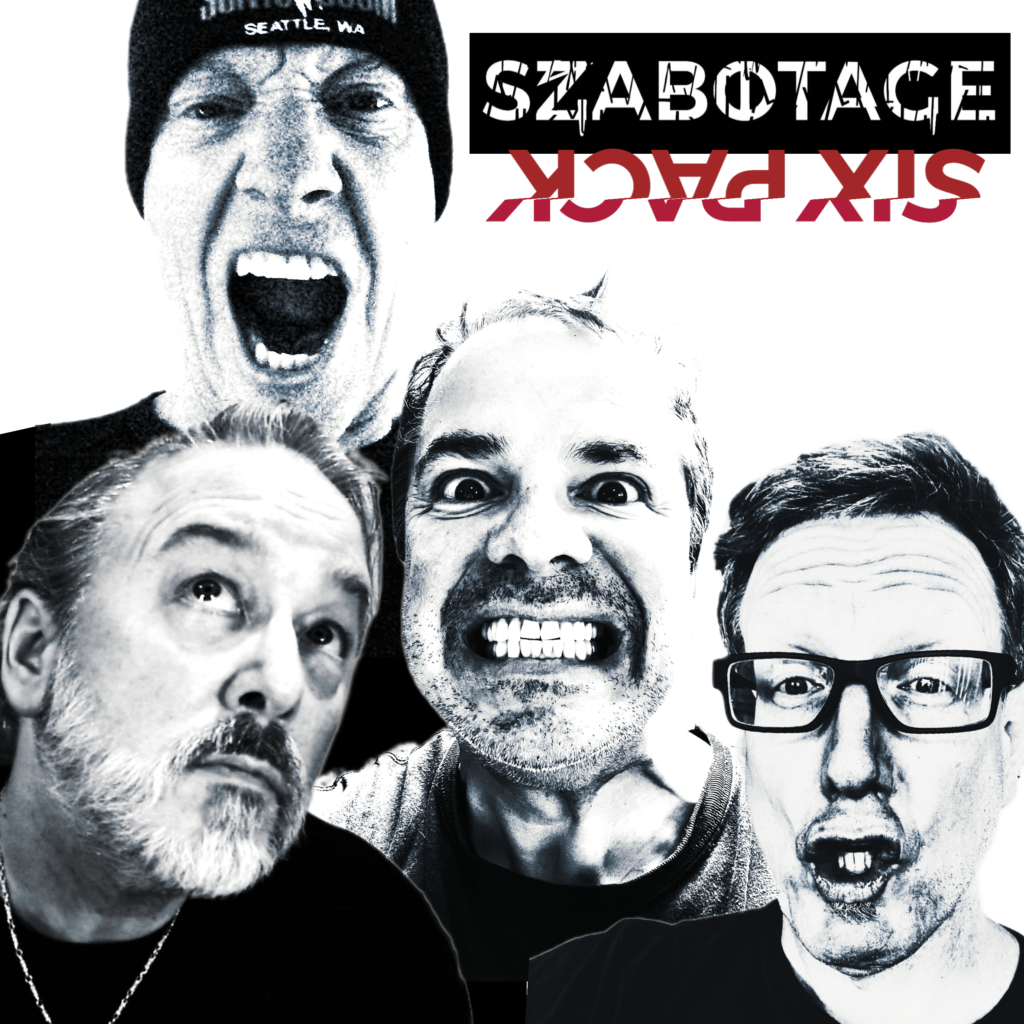 It’s almost a judgment about American life over the last 30 months naming a song “Mistakes Were Made”. The opening cut from Szabotage’s EP Six-Pack doesn’t waste its time with gentle strands and, instead, serves notice of its intent to clobber listeners from the outset. Victor Szabo’s juggernaut riffing does not try remaking the songwriting wheel. He does, however, clutch listeners around their figurative throat and his bandmates, rhythm section members Grant Moynes on drums and Mike Dykeman on bass, provide plenty of supporting firepower for his efforts.

The band continues blazing a trail of scorched earth with the EP’s second track “Channeling”. It’s less hectic than the opener, but the same restless creativity powering the band’s rock muscle in the first track keeps running wide open. Sound effects bookend the song and it ends in a way that may surprise some listeners. “Are We Machines?” explores rock music with different shades than we encounter in the first two tracks. There’s a light progressive metal edging creeping into the band’s sound as the song has condensed yet colorful passages where you can feel the players stretching out. The chorus is arguably the EP’s finest.

Szabotage continues expanding its sonic potential with the EP’s fourth track. “Joyride” is a synthesis of sorts between the riff-centered approach of the first two tracks, the pace tempered, and the more compositional approach of the third song. Szabo’s guitar riffing is especially memorable, and he adds some fiery lead during the song’s second half that raises its temperature. Drummer Grant Moynes excels on the track “Sinn Fein” and his command of the cut’s pacing never missteps.

James Phillips’ intense and wide-eyed ranting isn’t your grandfather’s idea of a rock singer, but his authority is indisputable. He shifts his delivery as the songs demand, however, and anyone who thinks he’s capable of little else except growling underestimates his talents. The EP’s final curtain falls with the track “Fremont” and it’s a final reminder of Szabotage’s completeness. The pandemic and accompanying lockdowns gave the band an unique opportunity to hone their interplay and you hear that here. It exhibits their progressive tendencies, as well, while exerting the power listeners expect.

Vancouver, Canada isn’t renowned for producing five-star metal and/or hard rock acts. Szabotage changes that for me with six songs. The band’s core, Szabo and Phillips, are the Vancouver contingent and their long personal relationship, nearing 20 years, gives these songs a solidity other bands lack. Dykeman and Moynes have been making music for just as long and the chemistry they share with the singer and guitarist is undeniable.

Six-Pack is a punchy and impassioned illustration of old things made new again. There’s no groundbreaking formula present in these six songs that separate them from the pack. Instead, it is the depth of feeling and absolute honesty that you hear in their music that takes these songs from the exceptional to the truly memorable. There’s more to come. Szabotage possess talents big enough to take them far away from Vancouver, Canada.