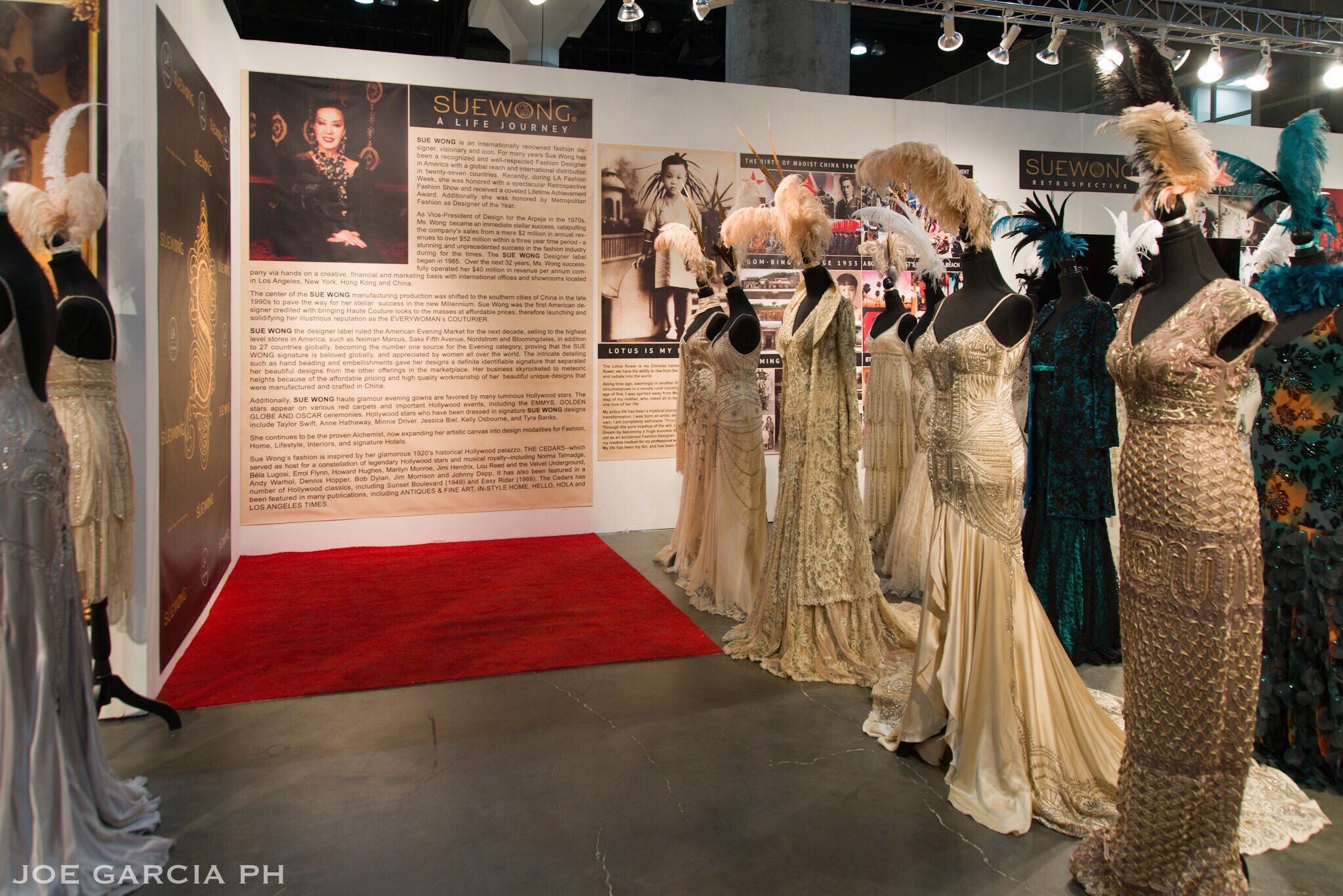 “Fashion you can buy, but style you possess. The key to style is learning who you are, which takes years. There’s no how to road map to style. It’s about self-expression and attitude.” …Iris Apfel

Internationally renown fashion designer and artist Sue Wong creates with the impact of a powerful pendulum swinging back-and-forth between the Modern and the Romantic. With each new collection, Sue Wong never fails to astonish, employing the revered age-old couture techniques implemented by the finest Couture houses in Europe, and evoking the allure and glamour of various eras such as Weimar Berlin, 1930s Shanghai, Precode Hollywood and Manhattan’s gilded Jazz Age. While often adopting vintage style, every design belongs in the now and is decidedly very Sue Wong; exquisite fabrics shimmering with incandescent beads, unique embroideries and layered textures embellished with passementerie and soutache combine to create works of art that are graceful, elegant, unique and timelessly beautiful.

Born into humble circumstances in a remote countryside in Southern China, Sue was spirited away from her ancestral home at the age of five by her Mother, who longed to be reunited with her Father in America. Journeying to the United States a year later, mother and child reunited with Sue’s father in Los Angeles. Hers is an inspired story as Sue Wong is the living embodiment of the great American Dream— a classic Rags to Riches story that spins a story of an incredulous, fascinating life, which along with the success, achieved through tenacity and hard work, also came much tragedy and sacrifice.

Sue Wong was the first American designer credited with bringing Haute Couture looks to the masses at affordable prices, therefore launching and solidifying her reputation as the Every Woman’s  Couturier. She ruled the American Evening Market, selling to the highest level stores in America, such as Neiman Marcus, Saks Fifth Avenue, Nordstrom and Bloomingdales, in addition to 27 countries globally, becoming the number one source for the Evening category, proving that the SUE WONG signature is beloved world- wide and appreciated by women all over the world.

Sue Wong truly captures and embodies through her work, her mantra of Beauty. Magic.Transformation. It is the Eternal Feminine Goddess energy that Sue Wong aspires to honor in every woman, creating beauty and sorcery that both enchants as it empowers, leaving a trail of wistful romantics speechless in its wake…

The self-made designer is just coming off of two major powerful, magical events, first “The LA Art Show Sue Wong Retrospective, ” in celebration of 25 years of Sue Wong’s fashion history, held at the Los Angeles Convention Center, which garnered an audience of over 70,000 guests and visitors during the four day exhibition. It was the designer’s first Museum show, and featured 70 stunning gowns displayed on mannequins culled from her extensive library and impressive archives. “The Sue Wong Fashion Retrospective offers a glimpse into the vortex of my creativity—a portal into timeless Glamour where Sue Wong fashion awakens a magical experience of beauty and haute glamour, representing my creative temple of art for more than 50 years.”…. Sue Wong

This was followed only a few days later by the opulent and visually inspired Sue Wong Academy Gala, the much talked about Oscar party, which benefited Project Angel Food, a non-profit organization that delivers food to those with life threatening situations. “The extravaganza was a celebrity infused, bedazzling evening of fashion, classic Hollywood glamour, entertainment, and music, where East met West. It featured a classic, elegant, epic SUE WONG fashion extravaganza in juxtaposition with the venerable Abbot of the Los Angeles SHAOLIN Temple, Shi Yan Fan and Shaolin Warrior monks who stunned the audience with riveting, action-packed performances. The unforgettable gala brought people together to promote art, beauty, spirituality, and charity through the universal language of Light and Humanity.

I had an intimate conversation in the first of a series of in-depth editorials featuring the extraordinary life and holographic imagination of Sue WONG, chronicling her inspired, empowering and unbelievable life experiences.

After growing up as a little girl in Maoist China, facing poverty and near starvation, how did you become inspired to one of the most successful women on the planet as a fashion designer?

I think there were a number of factors. Basically, growing up in scarcity

and poverty in post Revolutionary Maoist China, I dreamt of a more glamorous world.  However, I was born a natural creative intuitive, and never relied on any schools of training to execute my various modalities of creativity. I chose Fashion as my profession as my line creative work, however, I am multi-dimensional in my creative work, and excel in many other fields of creative visual art as well. As a creative intuitive, I apply my artistic sensibilities to everything that I do, therefore optimizing the higher gifts that I was blessed with — whether it be interior, furniture or garden design, architecture, graphics design, painting, drawing, writing, cooking, Ikebana, throwing a stylish soirée, art-directing a photoshoot or creating an experiential fashion show. My biggest blessing was to have been born an artist and I feel very honored to have had the privilege to share my art and creativity with the world.  The ability to give creative expression to my Art is the privilege of a lifetime.

I’ve had a very successful and enduring career in Fashion. One might ask me what gave me the impetus to become a fashion designer. It was probably centered around the fact that my mother hand-sewn and made me funny, patched together Chinese dresses, but when I came to America, all the other girls had all pretty little Western dresses which made me feel very awkward as an outsider. I started making my own clothes at age 9. I created them from fabric remnants from JJ Newberry. I would save my little allowances and buy a piece of remnant for 30 cents and I would start making my own blouses and dresses. Originally, I actually had aspirations to be a fine artist—I dreamt of being painter, but my parents refused to finance my education in art. So I went into fashion as a sideline interest. At age 16, I was picked to represent my school out of 350 girls which was Culver High. We did modeling, displays, and that was the beginning of a life-long illustrious career that spanned the decades.

I had a one-of-a-kind fashion boutique store in Bohemian Venice Beach during the height of the Youthquake movement of my youth. Back in the day, I would buy antique clothing by the pound. I would extract all the beautiful details, like the embroidery, the appliqués, the beadwork and I would re-design an entire new gown, of course with a retro glam feeling, and then I would use these antique embellishments and re-purpose them. They became a sort of one-of-a-kind modern-day masterpiece, and that’s how I got started. Bianca Jagger and Goldie Hawn were my early celebrity clients.

That’s a story in itself. Where do you come up with your vision of style. For example, during the fashion show at your Gala you displayed a wedding gown with angel wings, what inspires these ideas?

I find the creative process to be very spontaneous and organic, and it just flows through me. Creativity is something that emanates deeply from within the soul — and all creations are mirrors of the Soul.  Being an artist means that one is born with a different perception regarding the world.  One’s psychic sense and one’s awareness of the world is more keen and acute.  Artists are more sensitive and are more directly connected to feeling.  Therefore, Creativity is highly psychic, intuitive and visionary, and requires much tuning into the etheric realms.  It is not solid matter; it is drawn from spirit essences.

Do you have a favorite designer?

I have a few…but the New York designers are too homogenous.  I personally like the Japanese avant-garde, like the designer Junya Watanabe and Comme des Garçon, both whom I wear quite a bit. I love Issey Miyake because practically live in his pleated architectural numbers. The European designers I enjoy would be the delirious mad genius of John Galliano, a formidable creative force. It was really very sad what happened to him at Christian Dior. I also admired the late great Alexander McQueen for instance, who

was another tragic casualty who succumbed to his demons; and the madcap artistry of Vivian Westwood. I like those types of avant-garde designers. And Jean Paul Gaultier would be another one of my favorites. These are all artists merely expressing their creativity through the language of fashion.

Aside from the fashion industry I know that you are creating a movie and your other exciting future plans. Let’s talk about that without giving too much away.

My biopic, RED LOTUS is based on a remarkable epic story of a little girl, born into a humble remote village in Southern Maoist China who journeyed to America; who through her struggles, both personally and professionally, rose to being a powerful, self-made woman and an icon in the glamorous world of High Fashion. Though she transcended all struggles and adversities, she never forgot her modest roots and her historical and cultural ties to the land of her ancestry.

This is a story of hope, survival and redemption, which has the elements of a Shakespearean tragedy—with the themes of power, greed, fame, money, betrayal, glamour woven in—all at great personal price and sacrifice, with huge struggles and dramatic upheavals threaded throughout. It’s a story of unfathomable challenges, redemption and finally, resurrection. Ultimately, it is a story of Female/Self empowerment that can serve as inspiration for millions globally. My story is ultimately about hope, and that everyone can manifest the vision of their dreams—if they have the courage to dare dream. My life has been a wondrous, magical journey of ten thousand miles.  The essence of my message is to simply embrace life with full fervor and passion. As one of my favorite teachers, Joseph Campbell taught: FOLLOW YOUR BLISS! I have followed mine and therefore I am living my dreams.

Wow! You have a Rags to Riches Story.

I love your story. It’s inspirational and hopeful and positive.

I’m like the Phoenix that is always rising from the ashes. Life lessons will come at you constantly. The test is how you deal with the slings and arrows that life points at you.  There is no such thing as a negative experience; rather, it’s about perceiving lessons as blessings in disguise.  I lost everything that I built twice — and twice I rebuilt it and grew stronger than ever before.  If there is a fire and I am the equivalent of a moth, then I plunge myself into the fire knowingly — even if it means I have to crash and burn, so that ultimately I resurrect myself into the Phoenix that I am truly meant to be — rising from the embers and the ashes — to soar the heavens ever higher.