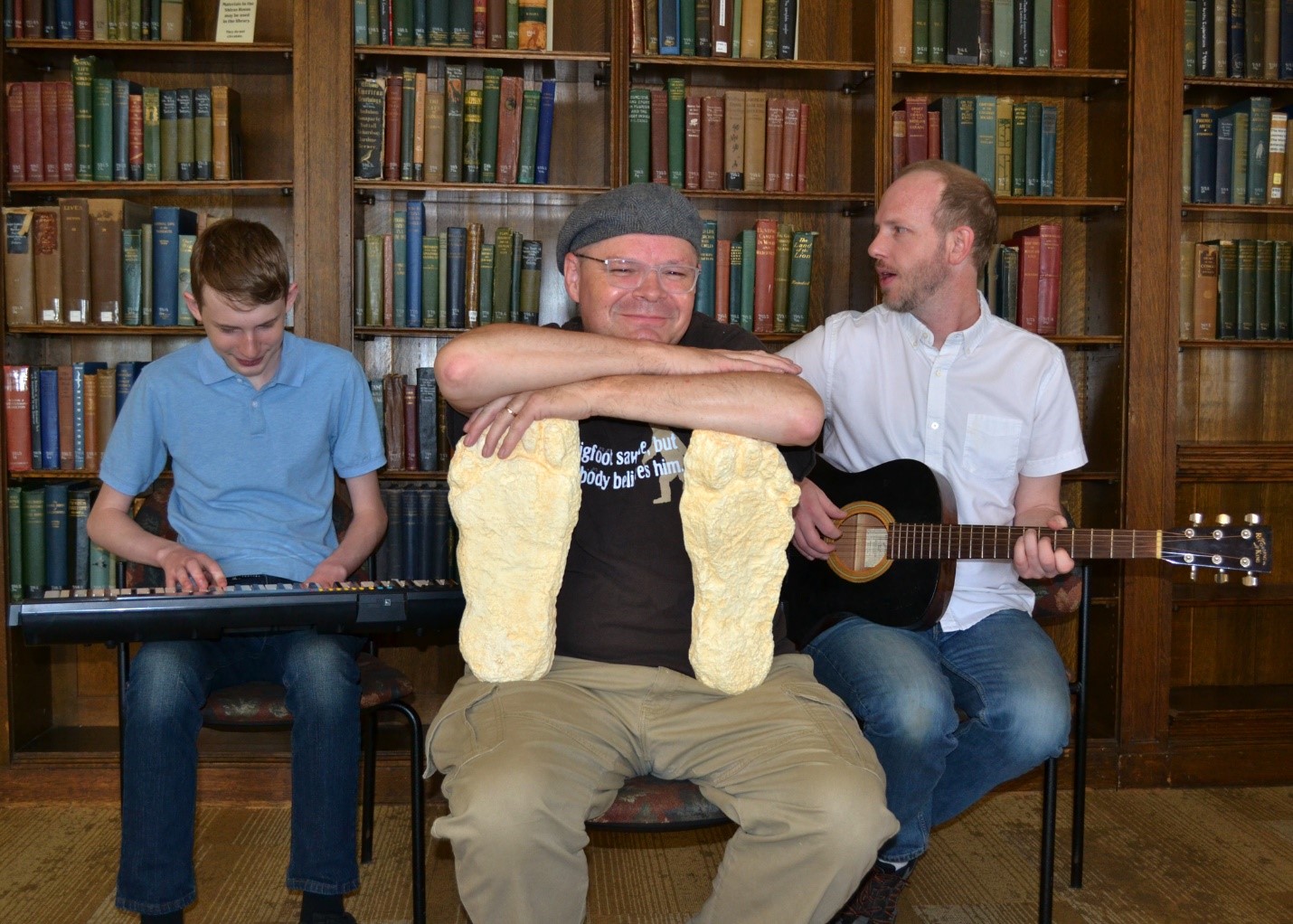 The collaboration between father and son band Streaking in Tongues and Michigan poet Marty Achatz has produced one of 2021’s more interesting releases. Slow Dancing with Bigfoot is a rare perfect combination of easily relatable and stripped-down musical compositions with Achatz reciting his poems over the top. If you are a reader of poetry and love folk-inspired guitar arrangements, this is an album you will enjoy from beginning to end.

It is an uplifting experience as well. Achatz has a gift for orally interpreting his own work. Despite the slightly nasal quality to his voice, he invokes the myriad emotions unleashed through his verse with a deft and confident timbre. The observational qualities of “Thirteen Ways of Looking at a Bigfoot” are accentuated by his recitation but there’s ample emotion present as well. The specificity of his poetic eye and his skill at conjuring images with minimal verbiage are tools he puts to good use throughout the collection.

“A Pig’s Orgasm Lasts 30 Minutes” may turn away some readers, his imagery can often be very visceral, but there’s no mistaking his serious intentions. Achatz’s writing has a durable connection to how life itself stokes innumerable desires and fits of hunger within us and this piece, among other concerns, touches on such themes. These are tracks impossible to digest in a single setting. These are poems and musical tracks that invite multiple listens as despite the relative simplicity of his language, there are depths present in these poems any interested party should plumb.

“Butterflies Taste with Their Feet” is one of the album’s more delicate unions of verse and music. The Ferguson’s sensitivity and attention to detail make them ideal musical interpreters for this material and the straightforward backing does an outstanding job of embodying Achatz’s writing. The low-key guitar and keyboard dialogue underpinning “Bigfoot and Jim Harrison Skinny Dip in Morgan Pond on Father’s Day” fill it with deeper colors than the poetry alone can generate. The moonglow quality of the musical backing creates a haunting three-part duet with Achatz’s voice. It will be a highlight for many.

Atmospheric guitar is key to the success of “Bigfoot Meets a Homeless Man on Presque Isle”. It peppers the performance with a hint of danger lurking around the corner, or perhaps the flavor of confronting failed dreams, and Achatz renders the encounter with vivid and heartbreaking detail. His consistent use of similes are flourishes with a purpose rather than gratuitous ornamentation. “Starfish Have No Brains” match the delicacy of the earlier “Butterflies Taste with Their Feet”, both poetically and musically, as he works out another extended metaphor with the same discerning eye present in the earlier track.

The penultimate poem “Elephants Are the Only Animals that Cannot Jump or, an Elephant Leap of Faith” has a bit of guitar preamble opening the song before settling into a simple rhythmic melody. These some understated comedy running through this piece but some poignant lines reveal his deeper intent. Achatz is a writer possessing true nuance emboldened as much by what he doesn’t say as what he volunteers, and has produced a work with Streaking in Tongues he should be proud of for the remainder of his days.