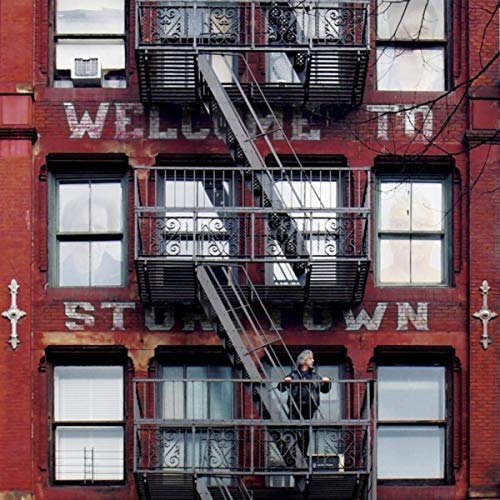 Storytown grew out of band leader Guy Story’s desire to write and record songs true to his experience and reflective of human existence in all its permutations. The Mississippi born and raised Story prospered for three plus decades working for Amazon, Bell Laboratories, and as founding CTO at Audible and exerted little known influence over the early developments in digital media, rights management for a new era, and startup culture. Storytown’s debut Welcome to Storytown has received rapturous responses from those who have heard the collection. The band’s new single “Hard to Be Up When You’re Down” reveals why.

It moves at an easy amble and has an acoustic character. Story’s voice is clean, untouched by the years, and peaks at all the right places. He incorporates subtle instrumental touches throughout the track without ever coming across as ostentatious. The vocal melody is attractive throughout the verses and the track peaks again when Storytown hits the song’s chorus. Evidence of the song’s superb construction comes in many ways, but the sudden and brief stop following the first chorus is exceptional.

The lyrics are intelligent without ever flying over the listener’s head. Storytown keeps things on a conversational level anyone who lived through the pandemic will relate to and we are thankfully spared any politicized broadsides. Storytown, instead, focuses their attention on the human effects. The aforementioned vocal melody strengthens the lyrics’ impact, and they are tailored well to the musical arrangement.

Anyone looking for extended instrumental breaks or solos should look elsewhere. Storytown’s songcraft does not include such cliches. Story, instead, gears everything toward serving the song and other concerns never figure into the equation. This intense focus on building the song helps make the track infinitely more memorable and you’re likely to find yourself humming the melody after the cut ends.

He has harbored this passion for a long time. You hear it in the commitment in his vocal, assertive without ever being strident, and treating every word with care. He wants to connect with his listeners. There’s little doubt in my mind that “Hard to Be Up When You’re Down” will play as well if not better with live audiences. Minimal adjustments, if any, will bring this song to life in a concert setting and bring audiences together with the artist in brief, but affecting, communion.

We will be hearing from Storytown again soon. There’s no doubt. The passion mentioned in the previous paragraph will not burn out or grow dim soon. Story mentions in the accompanying press materials that writing a new song is always a leap of faith for him, but it’s a leap that he’ll continue making. It isn’t for fame or fortune but, instead, because he has to. Making music is as intrinsic to his being as breathing and he’s a keen observer of human nature who has something substantive to say about how we live. Turn your ears toward this music and listen close because it’s well worth hearing every note and syllable.