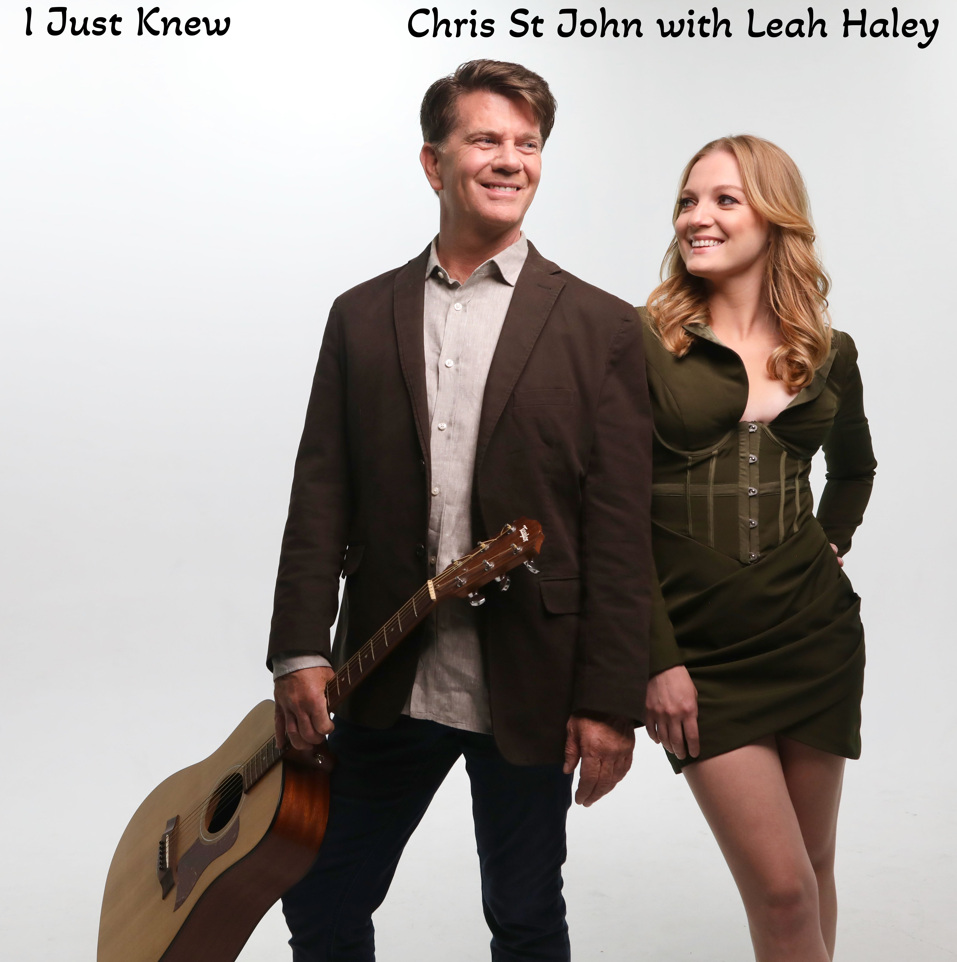 Written and produced by renowned songwriter Stephen Wrench, Chris St. John’s new duet with vocalist Leah Haley on the single “I Just Knew” is a welcome respite from increasingly tumultuous times. His tenor vocal range is ideal for delivering a love song that dispenses with the usual falderal about love in favor of succinctly depicted moments in miniature and authentic human emotion. St. John has likely never approached singing any song in a paint-by-numbers fashion either and he doesn’t start here.

St. John released his debut album I’m Dreaming in 2021 and has been riding a wave of one success after another since. His slightly weathered voice is perfect for singing a lyric that focuses on the end of a journey when you feel like you’ve discovered your soul’s counterpart in another at last. Placing this message in a gentle yet musically substantive setting may seem obvious, but the resulting magic is not. The arrangement and playing are well-suited to the singer’s voices and exquisite sensitivity underpins the performance.

Haley’s voice has an understated bluesy quality in this setting as well. She phrases the lyrics more urgently than St. John, but it isn’t an insult to say so. St. John, Wrench, and Haley understand that one of the keys to crafting a memorable duet can be the contrast between the singer’s approaches. The duet presumably aspires to portray a “dialogue” between two individuals and “I Just Knew” captures that well.

It is obviously a spot-on selection for wedding receptions or anniversaries, and that is because it aims for and reaches a universal level. Anyone who has felt love for another will relate to all or a significant part of this song. Both singers’ voices are wide-open, inviting listeners to share this experience with them as much as possible, and the music caps the performances with melody and genuine elegance.

Wrench’s production captures the mix of violin and acoustic guitar with clarity and balances it well with each singer’s voice. There’s a very intimate feel pervading this song and it thankfully never feels rehearsed. Instead, “I Just Knew” has a perfect first take feel, rife with spontaneity, and tailored to a perfect length.

The song’s accompanying video is an excellent complementary work. The promotional clip features the words as well in artistic, yet never unreadable, font. Everything about the musical side of “I Just Knew” has a high degree of polish without sacrificing its soul and the video maintains that standard. It matches the song’s steady pace and incorporates eye-arresting visuals that never detract from the song.

“I Just Knew” will earn St. John a bevy of new fans and deservedly so. Leah Haley, as well, will emerge from this experience with a far higher profile than before. “I Just Knew” is a single that reminds us of many things, but one is beyond any doubt – that the world is still full of love and we’re lucky to have such great singers and songwriters capable of documenting its transformative effects.