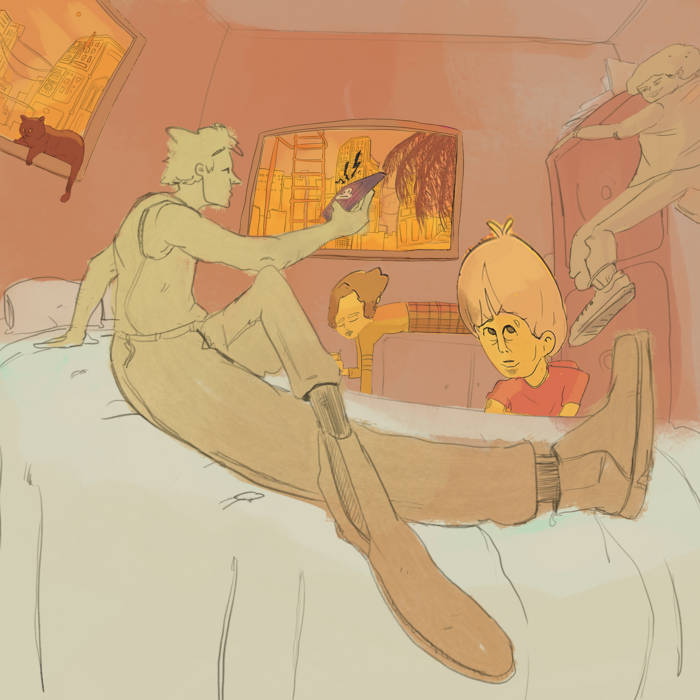 Sour Apples Releases ”The Warmth Out In This Sun”

Nico Pry is apparently the leader of the Sour Apples (more about this later) and they’ve just released a new collection titled The Warmth Out In This Sun. Mr. Pry says he’s been writing songs since he was 17, and composes them all on acoustic guitar. The band’s genre is indie alternative rock (I’d add acoustic rock or experimental folk rock) and among their influences are The Velvet Underground, The Beatles, the Pixies and (perhaps) The Beach Boys. A songwriting inspiration for Pry is Paul Simon. Recording took place at Pry’s home using just a laptop and two microphones (which is fairly obvious). Another album and live shows are in the works.

Now, I am not trying to blame the Sour Apples for any problems I have as a reviewer, but I must take a moment for a Public Service Announcement to all artists seeking a review: People! Send NAMES! The names of your band members and what they actually play would be even better! I’d much rather spend my time listening to your music than scouring Instagram pages for identity clues. If your music is good, I’d really like to credit the players. For the Sour Apples, the names I was able to find are Kaden Tavares, Caleb Mars, Julie, The Lemon Tech Band, sh-OIL-z, Andre Kunik and Duncan Holt Brian. I hope those are correct!

“This Way” starts the album with laid-back acoustic and electric guitars and busy percussion, similar to Wilco. The vocals are like your pals’ stoney voices at a party, and the production is bedroom-y to the extreme. Mixing choices are seemingly made on the spot, with fuzz guitars jumping from left to right and back again, sudden reverb blasts, and EQ and volume changes jumping out from behind hidden barriers. The song itself is actually pretty good, though the group bends over backward not to take it too seriously.

“I Feel the Breeze” features a DEVO-like keyboard structure and lots of crunchy, distorted short-wave sounds surrounding the guitars. At a minute and 15, I was just getting a handle on the track when it ended!

“Next Stop” is another shorty (I just noticed that many of these songs are around two minutes) and is sort of folky like the Beatles White Album fed through a tremelo patch. Love the beat and chord structure here, which really hints at the hidden band’s talents. “Jules” is a faster acoustic-based song that recalls early Elliott Smith, both musically and vocally. The screeching background noises remind me of Pere Ubu, which is something I hardly ever get to say!

With “Feather” I finally see some connection with Paul Simon, though refracted through the especially hazy atmosphere these guys create. There’s a good, simple song in there but the ghostly vocals think it’s all their show, and wander across the speakers at will, sometimes blowing into the mics. However, eventually you can hear some really nice acoustic guitar, mandolin and bird whistling.

“For You” is another fast strummer that oddly mirrors the opening of Paul McCartney’s “Band On The Run.” What sounds like a synth, though, may actually be a high-pitched electric guitar using Ebow. Whatever it is, the mix here is surprisingly simple and engaging, even while inherently weird. This just may be my pick for a future playlist!

“Slip On Ice” begins with an impressive guitar riff and kicks in with more of that Wilco acoustic rock energy. This sounds like the band actually wants you to hear what they sound like without all the wandering vocals and otherworldly backgrounds, though there’s hints of that too.

“Owl Tune” has a post-baroque autoharp opening similar to early Genesis, of all people! The song proper is another folk-rock hoedown, this time with a violin playing along but not always in tune! I hear so many indie albums with string sections that sound like they came straight from the Philharmonic (I’m looking at you, Strawberry Tops!) that it’s actually a gas to hear a fiddle player who’s a little rough around the edges. A personal favorite!

So there it is. The music of the Sour Apples really can be as sweet as a Fuji apple, but as sour as the strangest experimental art. It’s a bracing combo that my not lead to lasting fame, but you can certainly enjoy it right now!