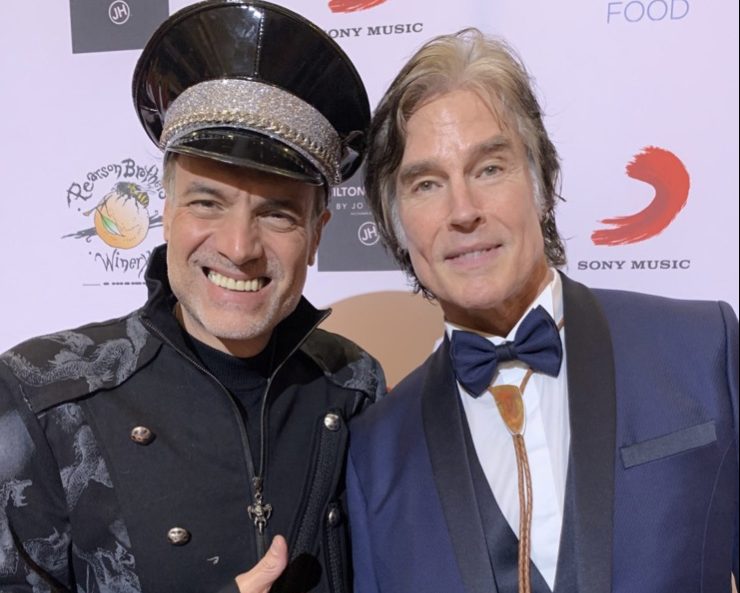 Following a Grammy Soirée Red Carpet event and a live performance at The Killer Yacht Club with The Grammy nominated Hailers and Pink Floyd’s Scott Page, it was time for New York based recording artist and promoter  SohoJohnny to make his Hollywood debut. Trading his sport jacket and suits for a more flashy and bedazzled attire from the vintage area of Melrose, styled by award winning hair designer Mark DeAlwis,  SohoJohnny and longtime friend Nino Liotta were off and running to an Oscar night extravaganza at the famous designer Sue Wong’s Academy Gala.

Garbed in a charcoal Michael Jackson/Adam Ant military jacket stemming from the romantic music era and a sparkling motorcycle cap, SohoJohnny made an outstanding entrance. The soft spoken, yet animated New Yorker easily networked through the crowd and celebrity names all arriving for the same purpose…. to have a great and memorable evening on the brightest night Hollywood has to offer… The Oscars.

SohoJohnny has already made an impact on the streets of New York and neighboring East Coast states with his huge elaborate disco spectacular and over the top Holiday soirée, all benefiting the American Cancer Society. His bombastic persona stems from his heartfelt desire to share the music he loves with the world well helping those less fortunate. As a promoter he’s hosted guests including: Saturday Night Fever’s Denny Terrio, Sister Kim Sledge, actor and singer Leon Robinson, iconic journalist and entertainer Michael Musto, Harold Melvin’s Blue Notes, Tavaris, Monty Rock III, and many others too extensive to mention.  This summer’s spectacular promises to go viral with the top names in rock n’ roll.

The prestigious Sue Wong academy Gala celebrations the Oscars with fashion, art, philanthropy and human spirit was also all about giving back. SohoJohnny was honored with presenting the Transformational Art Award “Music Gives Back” to some of the most legendary musicians on the planet. The honorees included Scott Page From Pink Floyd, Supertramp, and Toto, Stephen Perkins from Jane’s Addiction, Kenny Olson from the Hendrix Experience, Norwood Fisher from Fishbone and David Moss who sits on the board of directors for The Watts Conservatory of Music. Alongside Sue Wong, SohoJohnny masterfully presented the awards on the red carpet which was deemed one of the highlights of the evening.

SohoJohnny returned to New York the very next day but not without making more than a splash in Hollywood. It will be a long moment before the Tinseltown forgets SohoJohnny.